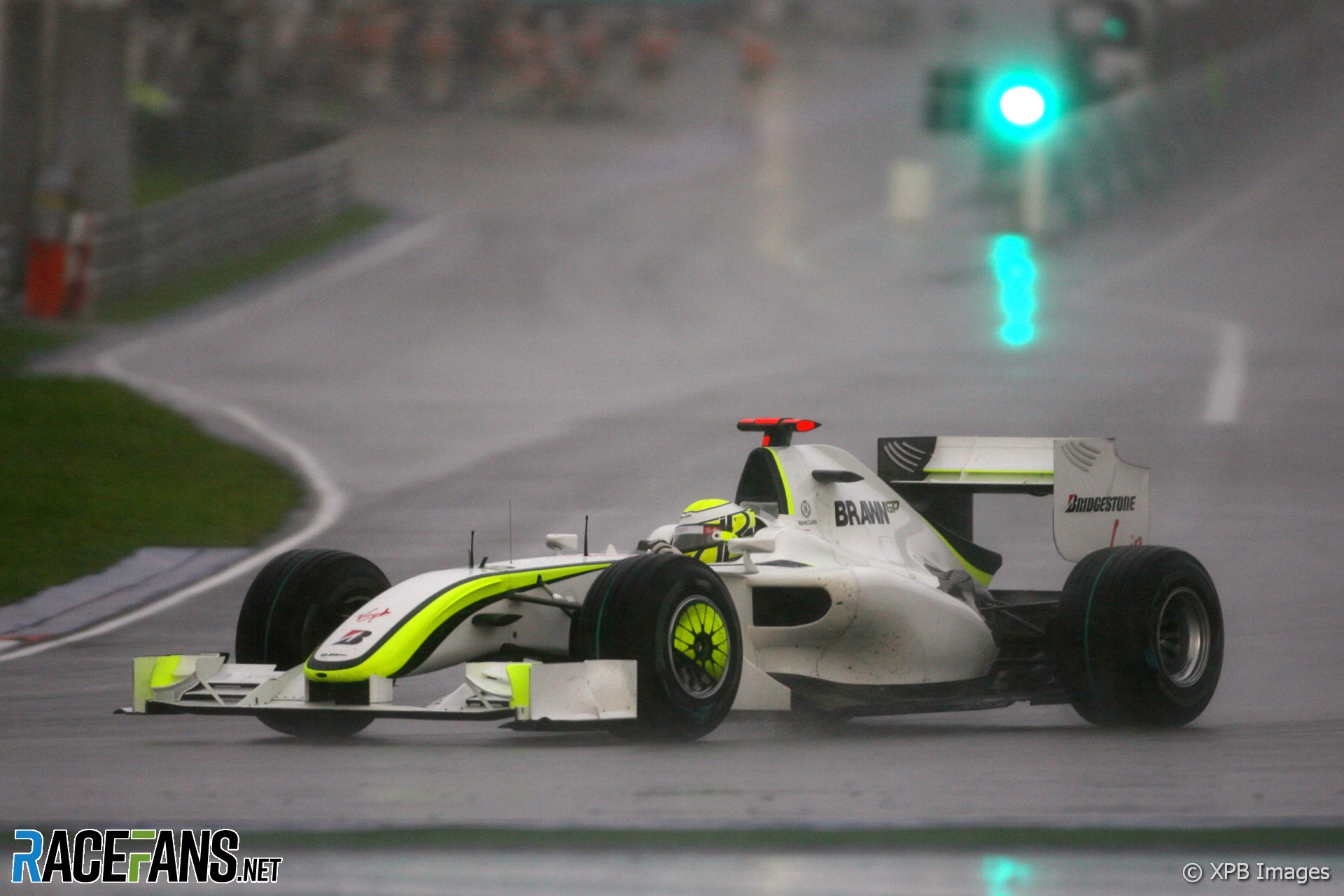 Jenson Button made it two wins in a row for Brawn GP with another victory from pole position in Sepang.

But although the Malaysian Grand Prix was an action-packed affair it failed go the distance after a huge rain storm halfway through the race.

Rain had threatened the Malaysian round of the 2009 world championship all weekend long. In between the F1 sessions it fell in enormous bursts, flooding the circuits and making any competition impossible. But so far the cars had managed to stay dry.

When the F1 cars lined up on the grid on Sunday it was a virtual certainty that they would finally see some rain during the course of the race. The question was, when would it arrive?

The cars took to the grid on dry rubber, with Jenson Button on pole position ahead of Jarno Trulli. But – most unusually – neither of the front-row starters led into the first corner. Nico Rosberg’s Williams mugged the pair of them from fourth on the grid, and disappeared off into the lead.

Fernando Alonso, despite a very heavy fuel load, made an incredible start in his KERS-powered Renault. The R29 scythed through the pack from ninth to briefly take third behind Trulli. But Button wasted no time and pounced on the Renault at turn 13 to take the place back.

Rubens Barrichello took up third behind Alonso, ahead of Kimi Raikkonen, Mark Webber and Timo Glock – the latter losing out badly from fourth on the grid. Lewis Hamilton was tenth behind Nick Heidfeld, but was quickly passed by Sebastian Vettel on lap three in his lightly-fuelled Red Bull.

As in Australia, McLaren were down to a single driver after just one lap – Heikki Kovalainen lost control of his MP4/24 while on the outside of Hamilton at turn five. BMW were in similar trouble, Robert Kubica’s race ending early with engine failure.

The lead trio began to break away quickly while a train of cars formed behind Alonso. Barrichello was first to get stuck in, diving down the inside of the R29 at the last corner, but running wide and allowing Alonso back through. Barrichello hit back at the next corner and this time he made the pass stick – but Button was now 6.5s up the road.

Next up was Raikkonen, who spent several laps looking for a way through and finally found one on lap ten. Two laps later Alonso ran wide at turn 13 allowing Webber to make a bid for sixth. the pair spent over a lap swapping positions until Alonso ran fractionally wide at turn one, allowing Webber to seal the deal. Now Glock set about trying to overhaul Alonso, but his task was made more difficult by the front wing damage he had incurred in contact with Webber.

Behind Glock was Vettel, the German having pounced on Nick Heidfeld when the BMW driver ran wide at turn four on lap eight. Hamilton also grabbed the opportunity to move up to tenth. That became ninth on lap 13 when Vettel became the first driver to make a scheduled pit stop – Sebastien Buemi having already been in after lap one for a new front wing.

Many teams had been expecting rain within a few laps of the start and it was a nervous time for the lightly-fuelled leaders as they made their pit stops under dark clouds but on a dry track. Rosberg had eked out a three second lead over Trulli by the time of his first stop on lap 15, and stayed ahead of the Toyota driver when Trulli pitted two laps later.

That released Button into clean air and he seized the opportunity a magnificent fashion, setting a fastest lap of 1’36.641 and, against expectations, staying on track two laps longer than Trulli did. That put the race in his hands as he returned to the track on lap 19 ahead of Rosberg and, after Barrichello’s stop on lap 20, leading the race.

With mischievous timing the rain now finally began to fall – three laps too late for Raikkonen, who’d made the bold gamble of switching to full wet-weather tyres on lap 18. The rain did not come soon enough or hard enough for the Ferrari driver.

Over half the field dashed into the pits on lap 22 – all of them for full wet tyres with one exception: Timo Glock. This proved a smart move, as the rain fell lightly at first. Glock coolly picked off one by one of his rivals as they nursed their wet weather tyres.

The varying performances of the cars at this stage made for great racing, particularly between Hamilton and Webber, who swapped positions for lap after lap. Hamilton used his KERS to great effect to pass Webber, but the Red Bull was vastly superior under braking into corners.

Webber briefly ran off the track at turn six, allowing Hamilton through again, but soon the Australian was back ahead once more and finally made the move work. Next he drove around the outside of Heidfeld at the final bend, taking fifth with total ease.

Barrichello was also making rapid progress, passing Trulli and Rosberg on lap 26, but spun on the next lap, dropping back down the order.

At around the same time Glock passed Trulli for second, and was now 28 seconds behind Button and lapping in the order of five to ten seconds quicker.

Button reacted quickly, darting into the pits for intermediates on lap 29. Several other drivers had already done likewise including Hamilton (taking on fuel to last until the end of the race) and Rosberg.

Button emerged from the pits just behind Glock but now came another twist in the weather – fresh, heavy rainfall. Button caught Glock by the end of his out lap, but as the Brawn car dived past at the final turn to take the lead, Glock calmly peeled off into the pits where full wet tyres awaited him – once again, the right tyres at the right time.

With the rain falling heavily now everyone who wasn’t already in the pits headed straight for them. Some, like Vettel, didn’t get there quickly enough and spun into retirement.

The safety car was sent out on lap 32 but it quickly became obvious that conditions were impossible, and the race was red-flagged. Even when the rain began to ease the huge areas of standing water on the circuit and low light made re-starting the race impossible.

The results were eventually given based on the finishing order on lap 31 – the lap before the red flag came out. That was especially unlucky for Glock, who had taken second from Heidfeld on the ‘phantom’ 32nd lap.

For the first time in 18 years, an F1 race had failed to complete at least 75% of its intended distance, and so half points were awarded.

The 2009 Malaysian Grand Prix will probably be remembered more for the unusual circumstances of its ending – and the fact that it could have all been avoided – rather than the fascinating race it was developing into in the early stages.

Two things won the race for Button – his remarkable pace ahead of his first pit stop, and that crucial pass on Alonso on lap one. But will he enjoy that kind of performance advantage at the next race in China, after the World Motor Sports Council have met to discuss whether his BGP001’s diffuser is legal or not?

If there was a touch of luck about Heidfeld’s second place he at least earned it by not throwing his car off the track late in the race. Glock’s race had the touch of the clairvoyant about it, and had the rain not been excessively hard at the end he was in a very solid position to challenge for a win.

Can Brawn keep up their winning streak? We’ll find out when the teams make an early return to Shanghai for the Chinese Grand Prix in two weeks’ time.