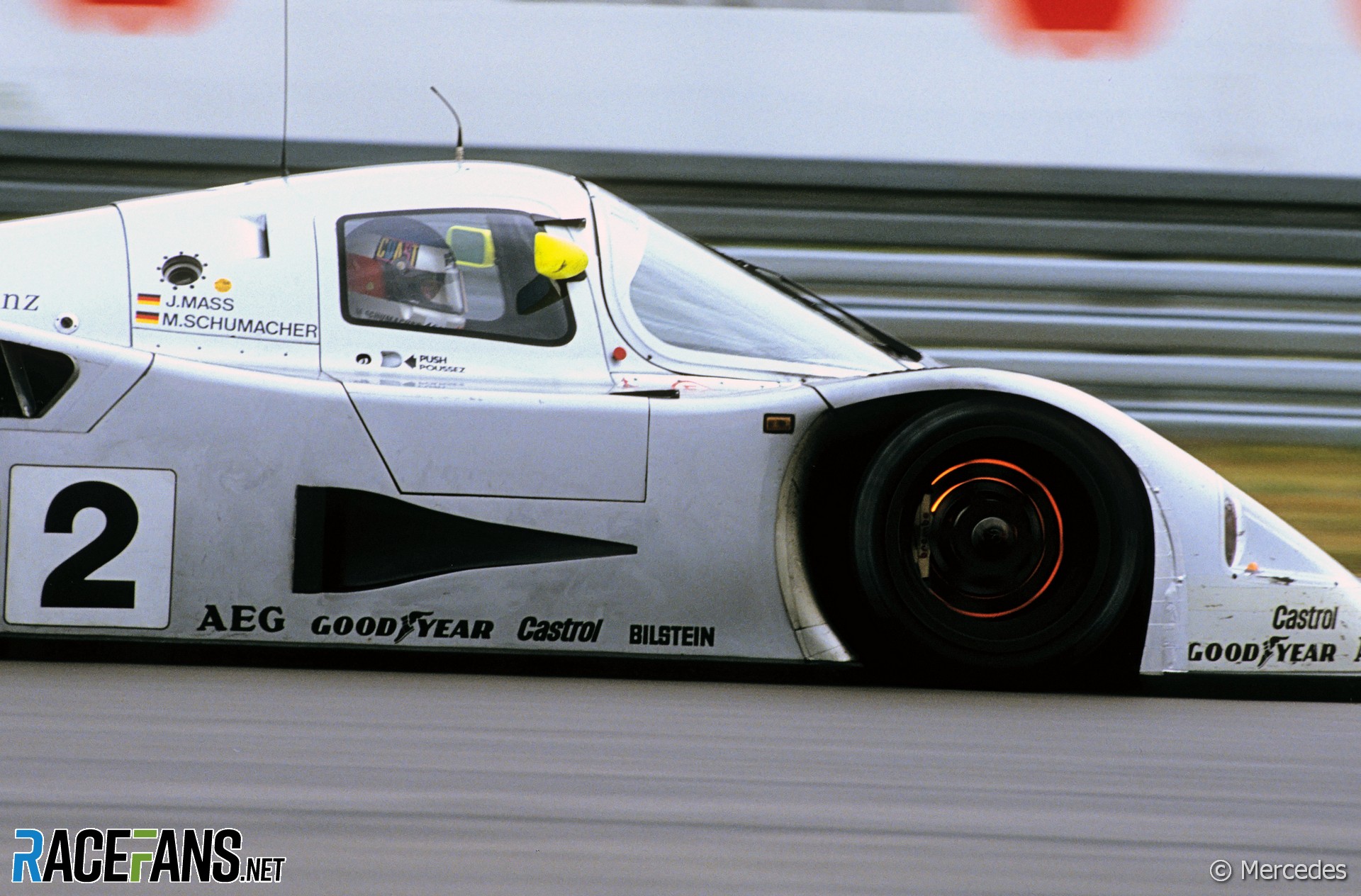 Michael Schumacher could be about to make a dream return to F1 with Mercedes’ new team in 2010. But it wouldn’t be the first time he’s driven for the three-pointed star: they gave him his big break in the World Sportscar Championship 20 years ago.

In 1989 Mercedes drivers Jean-Louis Schlesser, Jochen Mass, Mauro Baldi and Kenny Acheson filled the top four places in the sportscar drivers’ championship. But the company was considering a foray into Formula 1 – and seeking the next generation of German racing drivers.

It seized upon a trio of promising young drivers who had filled the top three in that year’s German Formula Three championship. They were champion Karl Wendlinger and runners-up Heinz-Harald Frentzen and Michael Schumacher.

Mercedes’ patronage gave the three drivers the chance to gain huge testing experience in very powerful cars – boasting around 900bhp. The three were rotated between the Sauber-run Mercedes cars in 1990 entering selected races. After Frentzen went a separate way for 1991 Wendlinger and Schumacher campaigned a car together for the full season, including the Le Mans 24 Hours.

In 1990 Schumacher was paired with Jochen Mass, the German veteran of 104 Grands Prix who scored his single win in the shortened 1975 Spanish Grand Prix. Schumacher said his time at Mercedes taught him how to look after his tyres and think strategically about his fuel load during a race. That would prove invaluable later in his F1 career when refuelling stops were introduced, allowing him to put what he’d learned to use.

Mercedes won the sports car championship again in 1990 with more than twice as many points as closest rival Jaguar. But the British team hit back in 1991 with the XJR14 designed by an important figure from Schumacher’s future: Ross Brawn. In a scenario not unlike this year’s F1 championship, Brawn exploited a radical change in the rules to produce a championship-winning car.

Meanwhile Mercedes struggled with the transition from a 5-litre turbo V8 to a 3.5-litre V12. Five of Schumacher’s eight starts ended due to mechanical failure.

Schumacher’s sports car rivals got a preview of the uncompromising tactics he employed on the race track – not least Jaguar’s Derek Warwick, who flew into a rage after being hit by Schumacher during qualifying at the Nurburgring.

Warwick won the race but that evening Schumacher received a phone call from Eddie Jordan, whose F1 team was short a driver. We all know how this part of the story ends…

Despite making his F1 debut at Belgium on August 25th, Schumacher finished his season with Mercedes with races in Magny-Cours (France), Autodromo Hermanos Rodriguez (Mexico) and Autopolis (Japan). Schumacher won his final sportscar race in Japan, so that by the end of 1991 Mass and Schlesser out-scored Schumacher and Wendlinger by just two points.

Frentzen, meanwhile, had embarked on a doomed Formula 3000 campaign which set his career back. To cap it all his girlfriend Corinna Betsch left him at the end of 1991. She paired up with one of his former team mates, eventually becoming Corinna Schumacher…

Schumacher had expected to make his F1 debut with a Mercedes Formula 1 team, but their decision not to create such a team in 1991 led him to change his plans. Nonetheless, for the first few years of his F1 career he still had a clause in his contract where Mercedes could take him back if they entered F1 with their own team.

When Peter Sauber entered F1 with Mercedes-engined cars in 1993 he tried to use the clause to prise Schumacher out of Benetton – and failed. Wendlinger began the year with Sauber and Frentzen later joined them. Schumacher never started a Grand Prix with a Mercedes engine, and spent much of his F1 career trying to beat Mercedes-powered cars.

It’s not hard to see why so many people think it would be perfect for Schumacher to make a final return to F1 with a company that did much for his fledgling racing career.