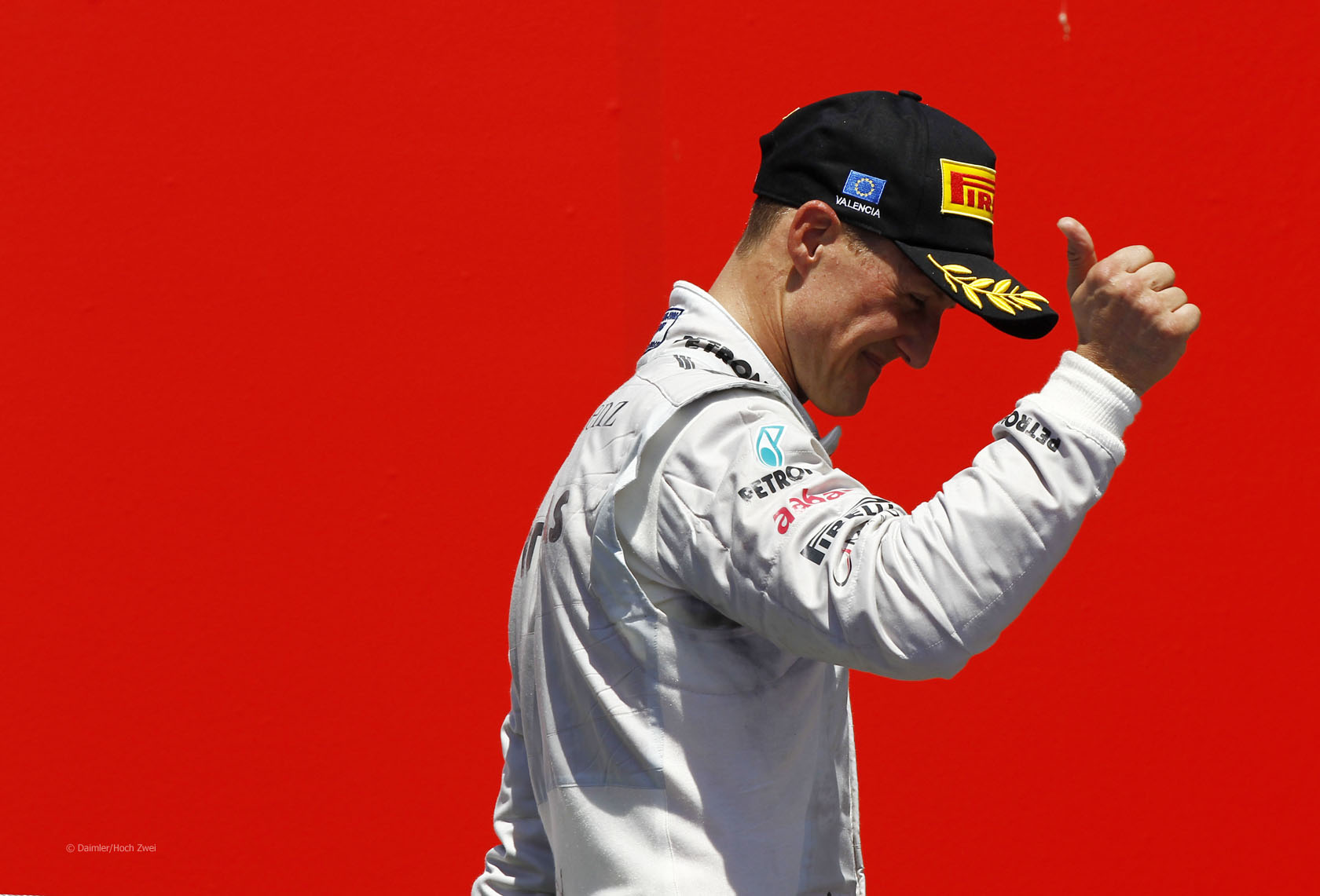 Michael Schumacher’s Formula One comeback did not achieve the success he and Mercedes were hoping for. But nor was it a complete disaster. Guest writer @Greg-Morland picks ten of the highlights.

Schumacher swept all before him at Ferrari in the first half of the last decade. Yet his comeback with Mercedes in 2010 mostly saw him scrapping for minor points finishes. He seldom looked like adding to his tally of 91 Grand Prix victories, never mind winning another world title.

But there were races to cherish and even the occasional glimpse of the greatness we remember from the first part of his career. Here’s are ten the best moments from Schumacher’s comeback.

Schumacher’s drive to sixth on his comeback in the soporific 2010 Bahrain Grand Prix seemed underwhelming at the time. Given that he was driving for Mercedes, which as Brawn had won both titles the previous year, hopes had been high that he could challenge for victories right from the off.

But with the benefit of hindsight, it seems Schumacher had in fact done rather well, especially given how much the cars had changed since his “retirement” in 2006.

Not only did he end his first race in over three years within four seconds of team mate Nico Rosberg, he finished ahead of Jenson Button and Mark Webber, both of which were driving significantly quicker cars.

After the first four races of Schumacher’s return it was clear he was not going to be in a position to challenge for the world championship. Regardless of whether his raw ability had deteriorated during his hiatus, the W01 chassis had proved to be no match for its title-winning predecessor.

But Schumacher certainly got the most out of it at the Spanish Grand Prix, an event he had previously won a record six times. After out-qualifying Rosberg for the first time, Schumacher consolidated his sixth position on the opening lap then made opportunistic overtake on Jenson Button as the McLaren driver exited the pits .

Schumacher then spent the remaining 49 laps of the race fending off Button for fifth place with some textbook defensive driving – no mean feat even in the pre-DRS era. Lewis Hamilton’s late retirement gifted him fourth place, a result he was only to better once over the remainder of his stint at Mercedes.

Schumacher qualified a strong fifth, a performance he would not better until this year. However he spun into the gravel at Turn eight on his final lap in Q3, and was fortunate that the resulting yellow flags prevented his rivals from beating him.

On race day, Schumacher was comfortably ‘best of the rest’ behind the dominant Red Bulls and McLarens. He gained an extra place after the infamous collision between Sebastian Vettel and Mark Webber and eventually came home fourth for the second time in three races.

By mid-2011, the initial enthusiasm surrounding Schumacher’s return had largely given way to indifference after a series of disappointing results. The 91-times race winner had garnered just three top six finishes in the twelve months since Turkey 2010, while Rosberg was a fixture among the leading points-scorers.

It was not until the 2011 Canadian Grand Prix that the Schumacher of old returned. In a chaotic race, he scythed through the field as the track began to dry towards the end, culminating in an opportunistic double pass on Felipe Massa and Kamui Kobayashi for second place.

However, a late safety car deployment left Mark Webber and Jenson Button on his tail, and he could do nothing to prevent the pair using DRS to blitz past. The wait for his first podium podium went on.

Schumacher has had a special affinity with Spa Francorchamps – it was at the Ardennes circuit that he made his debut, won six times (including his first Grand Prix victory) and clinched his seventh and final world championship in 2004.

While he never came close to taking an eighth Belgian Grand Prix win with Mercedes, Schumacher took more points at Spa in his three years at Mercedes than at any other circuit and his drive to fifth in 2011 was the pick of the bunch.

Starting from a career-worst 24th position after a loose wheel pitched him into the wall in qualifying, Schumacher managed his tyres well- and capitalised on an early safety car appearance – to battle back to fifth place by the chequered flag. It was a fine way to mark the 20th anniversary of his first F1 start.

In contrast to his attacking performance in Spa a fortnight earlier, Schumacher’s second consecutive drive to fifth a week later at Monza saw him on the defensive for most of the race.

Schumacher spent most of the first half of the race fending off Hamilton with a thoroughness that was right on – arguably beyond – the limit of acceptability. Mercedes team boss Ross Brawn even felt the need to personally issue his driver a warning over the radio. “I did exactly what I was supposed to do,” Schumacher insisted afterwards.

Button out-manoeuvred the pair of them to get into third and eventually Schumacher had to give best to Hamilton as well. But he’d made his mark in a spirited contest which led to the stewards clarifying the rules on defensive driving later on.

Though the results may suggest to the contrary, Schumacher hit some of the strongest form of his comeback in the early races of 2012. Taking advantage of a much-improved Mercedes car he was a regular at the front of the grid and only a mixture of misfortune and poor reliability prevented him from securing the results his pace deserved.

The season-opener in Melbourne is a good case in point. After qualifying an impressive fourth he moved into third behind the two McLarens at the first corner, and was holding off Sebastian Vettel when a gearbox failure ended his afternoon after just ten laps. By the final year of his comeback, if not before, it was clear Schumacher was not the same driver he had been in his championship-winning glory years. Some even suggested his skills had waned so much he was no longer worthy of a place in F1.

But despite having given his critics plenty of ammunition, who could honestly say that a man capable of recording the fastest qualifying time on the streets of Monaco is not worthy of a place in F1? The 43-year old-stunned the paddock by becoming the oldest man to top the time sheets since Jack Brabbham in 1970.

Unfortunately, Schumacher was denied a place at the front of the grid – and a shot at victory – by a five-place grid penalty he had received for driving into the back of Bruno Senna in the previous race. It said a lot about the mixture of speed, inconsistency and occasional ragged driving that marked Schumacher’s final season.

Schumacher survived a swipe from Romain Grosjean on the run to the first corner. A fuel pressure problem saw him retire towards the end of the race, so perhaps not starting from pole position was a blessing in disguise.

At long last, Schumacher made his return to the podium at the Valencia Street Circuit. A battling drive from a lowly 12th on the grid secured the Mercedes driver his first podium in 48 races and close to six years. It was his last in F1.

The result owed a lot to luck – Schumacher benefited from the retirements of Vettel and Grosjean, and Pastor Maldonado turfing Hamilton off the track in the closing stages. So tumultuous were the final few laps that Schumacher admitted he was initially unaware he’d finished third.

Ten years earlier, Schumacher had finished third only once all season, as he did in 2012. However, while in 2002 it was his lowest finish of the entire campaign, a decade later it was his best result not only of one season, but three. How times had changed.

Schumacher caught the eye in a wet qualifying session at Silverstone. The ‘Regenmeister’ proved his wet weather prowess had not deserted him by outpacing team mate Nico Rosberg by over a second in Q1 and Q2, eventually taking third on the grid, only a quarter of a second from pole.

He proved it was no flash in the pan with another superb qualifying performance at a sodden Hockenheim two weeks later, thrashing Rosberg by 3.5 seconds in Q2 on his way to fourth place at the end of the hour. Though he again slipped back to seventh on race day, Schumacher had at least given his home support a final glimpse of the talent that had made him a seven-times champion. It’s hard to view Schumacher’s comeback as anything other than a failure. Far from winning races and championships, he found himself in the previously unheard-of situation of being consistently outperformed by his team mate.

But with the benefit of hindsight perhaps our expectations were too high. Grand Prix racing is a physically challenging sport, and even a driver as supremely fit as Schumacher found it challenging in his fifth decade.

The cars changed dramatically during his absence. In place of unlimited testing and a tyre war – two essential elements of his success at Ferrari – came strictly limited testing, increased use of simulators, and standard-specification tyres.

Most of all, though, Mercedes never gave Schumacher a car with which he could have challenged for regular wins. Given the backing they enjoy from a major car manufacturer and the success they enjoyed before their rebranding in 2009, this was poorly anticipated at the beginning of 2010.

What’s your view of Schumacher’s comeback? What he right to return? What, if anything, did his three years at Mercedes reveal about how his earlier successes were achieved?

And were there any other highlights during his return? Have your say in the comments.