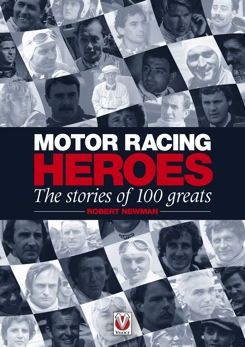 Describing itself as “the offbeat stories of 11 of the 20th century’s most heroic racing drivers”, this new title from Veloce squeezes its one hundred tales into less than 400 pages.

The reason its chapters are so short is because this is another compilation of magazine articles, in a similar vein to Simon Taylor’s Motor Sport Greats in Conversation and Maurice Hamilton’s Lunches with Legends, reviewed here previously.

But Motor Racing Heroes has a slightly different slant – author Robert Newman chose to profile a collection of his personal favourite racing drivers for a series of columns in Vintage Racecar Journal.

As you’d expect this list is heavily populated with world champions. In fact all of those not currently racing feature with a single exception: Jody Scheckter. Why the 1979 title winner was judged not to belong in this company is not explained.

You could easily guess many of the other names that appear – Stirling Moss, Gilles Villeneuve, Tazio Nuvolari. But there are several surprising and unusual inclusions, some which have fascinating stories behind them, particularly pioneering women racers Maria Theresa de Filippis, Helle Nice and Elisabeth Junek.

As this is a personal selection of drivers I take no issue with who the author has chosen to feature. But in places it falls short of his stated aim to “explain why these 100 men and women are my motor racing heroes”. It’s the sections on more recent drivers, which leave you wanting. They are more like potted biographies with too little on what made them special or noteworthy drivers.

In contrast the text comes to life when regaling tales of drivers from the pre-war era and early world championship fays. Perhaps that’s to be expected given its origin as a series of articles for a vintage racing magazine.

The drivers are listed alphabetically so you get no sense of progression throughout the book – it’s just a collection of articles. But that does mean it ends with the story of Alessandro Zanardi – who surely is the very definition of a motor racing hero.

The text is tautly written and rich in detail. Aside from the absence of any supporting images – which would have been a welcome addition for some of the more obscure entries – there’s no reason to feel short-changed by this book, unless of course you read the articles when they were first published.

I hadn’t, so I enjoyed this personal reflection on some of motor racing’s most vibrant characters.