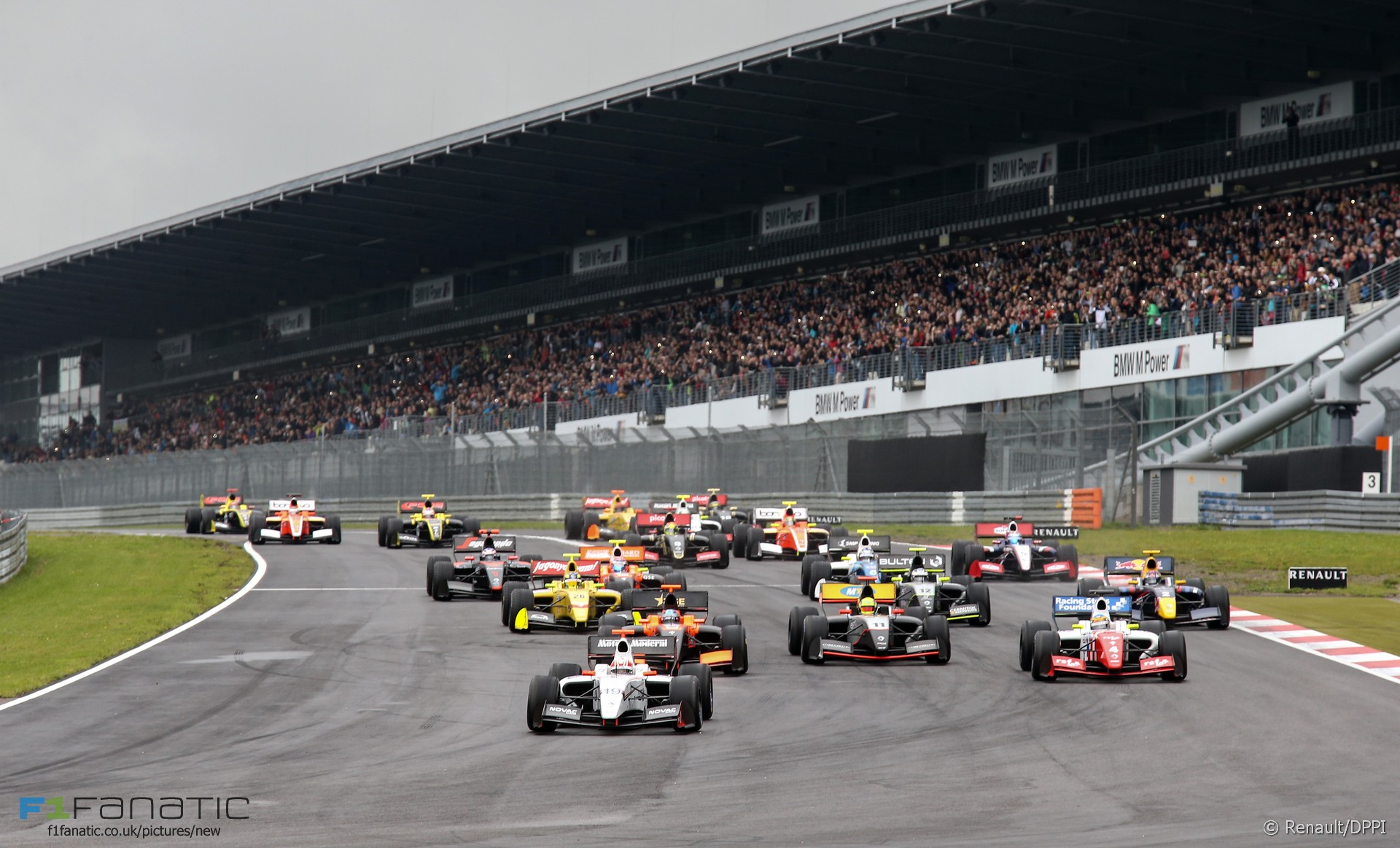 Sebastien Ogier clinched his third consecutive World Rally Championship title in Australia over the weekend. The Volkswagen driver stamped his authority on the series again and took the crown with three races to spare.

The Formula Renault 3.5 championship is looking ever more likely to go to Oliver Rowland who won again at the Nurburgring in the first race before rain played havoc with the second.

Elsewhere Citroen had a rare defeat in the World Touring Car Championship, the Indy Lights title was clinched at Laguna Seca and NASCAR prepares to begin its Chase for the Cup.

Australia’s rally shouldn’t really be won by the championship leader, who has to run first on the road on the opening two days before the dusty, gravelly course has been swept by other cars.

Nonetheless Sebastien Ogier took the win and claimed the title along with it. He produced a sublime performance marked only by a mistake on the shakedown stage before the rally even started. Jari-Matti Latvala and Kris Meeke completed the podium, the latter on there for the first time since his win in Argentina.

Oliver Rowland moved within touching distance of the title after winning the first of the weekend’s races at the Nurburging. His pole-to-flag was his eighth in the category, a new record, putting him one ahead of Antonio Felix da Costa and Esteban Guerrieri.

While race one was straightforward, race two was anything but. Rowland started from pole position again but struggled to get away on the damp track with slick tyres and was knocked into a spin by Gustav Malja, leaving him last. Those who elected to start on wet tyres dived for the pits as soon as the mandatory pit stop window opened, and a Safety Car appearance moments later played into their hands. That cost early runaway leader Pietro Fantin the chance of a breakthrough triumph.

The start of the race had a familiar look: Hiroaki Ishiura on pole position again, but he and fellow front row occupant Kamui Kobayashi were passed by a fast-staring Kazuki Nakajima from third. Joao Paulo de Oliveira made up five places to take sixth while Andre Lotterer was given a drive-through penalty for a jump start.

Kobayashi pitted on lap 29 from third, opting to change all four tyres with a 20 second stop, while the leading pair of Nakajima and Ishiura pitted on lap 45, stopping for fuel only and two front tyres respectively. The top three remained in the same order when they emerged from the pitlane, but with Ishiura closer than ever.

However Nakajima held on to take the win, his first of the 2015 season, followed by Ishiura and Kobayashi. The best-placed Honda was Naoki Yamamoto down in seventh. Ishiura now leads the title race with 41 points, seven ahead of Nakajima with only two races to go.

Former F1 driver Timo Glock claimed his first ever DTM pole position ahead of the weekend, and duly followed it up with only his second ever victory in the series. His BMW marque proved nearly as strong here as they were at Zandvoort, taking seven of the top eight positions, with only Mercedes’ Pascal Wehrlein interrupting it in fifth place.

BMW had another top four lock-out in race two, as rookie Tom Blomqvist – from second on the grid behind team mate Augustus Farfus – scorched to his first win in the series. Wehrlein was fifth once more to extend his championship lead on a weekend when closest rival Mattias Ekstrom and Edoarado Mortara failed to score points.

Motegi’s first WTCC round didn’t get off to the best of starts when an earthquake measuring 5.3 on the Richter scale shook Tokyo on Saturday morning, with the effects being felt in Motegi. Thankfully no damage or harm was done, and later in the day Norbert Michelisz gave the home fans reason to cheer by putting his Honda Civic on pole position – the first time Citroen have been beaten in qualifying all year.

He was unable to prevent the usual Citroen triumph in race one – points leader Jose-Maria Lopez took the honours, but Honda finished two-three on the podium with Michelisz beating factory driver Gabriele Tarquini.

Race two was a more unusual affair as the Citroens hit trouble: Lopez retired with a puncture while Muller suffered contact and dropped far down the order. Honda’s podium pair from Saturday also struggled, paving the way for fellow Honda man Tiago Monteiro to take the honours ahead of Hugo Valente and Rob Huff.

Race one featured the guest co-drivers before the regulars joined them for the 500-mile main event.

Holden’s Paul Dumbrell took co-driver honours which set the grid for the main race ahead of the Ford duo of Steve Owen and Cameron Waters, while further back the Volvo pair of Alexandre Premat and Chris Pither were involved in incidents along with Nissan’s Alex Buncombe.

In the main event, Ford were at the forefront with Mark Winterbottom finishing just six tenths ahead of Chaz Mostert. Dumbrell and Whincup were in the lead for the majority of the race but a puncture forced an extra pitstop plummeting them down to 15th position. Shane van Gisbergen finished third ten seconds back, with Garth Tander fourth. The result leaves Winterbottom 198 points clear of Chas Mostert.

Matt Kenseth dominated the final round of the normal season before the 2015 Chase for the Cup begins, giving Joe Gibbs their eighth win from eleven races. Kenseth was at the front for 352 of 400 laps, only losing his lead during restarts.

Team mate Kyle Busch highlighted the Gibbs Toyota’s dominance with a second place finish, while pole sitter Joey Logano ended up third after a strategy error early in the race. The places for the Chase field are now set and the following 16 drivers will compete for the championship in a knockout competition over the remaining ten races.

Spencer Pigot beat Jack Harvey to the Indy Lights crown after taking victory in both races at Laguna Seca. Harvey, who arrived at the season finale double-header as the points leader, was penalised for a jump start in the final race.

We’ve got Formula One and World Endurance Championship action on the same weekend, with the Singapore Grand Prix and Six Hours of the Circuit of the Americas coming up.

The World Rallycross championship will be at another F1 venue, using thier abridged version of their Circuit de Catalunya, and NASCAR’s Chase for the Cup will begin.

Thanks to Robert Mathershaw (@Mathers) for contributing to this article.