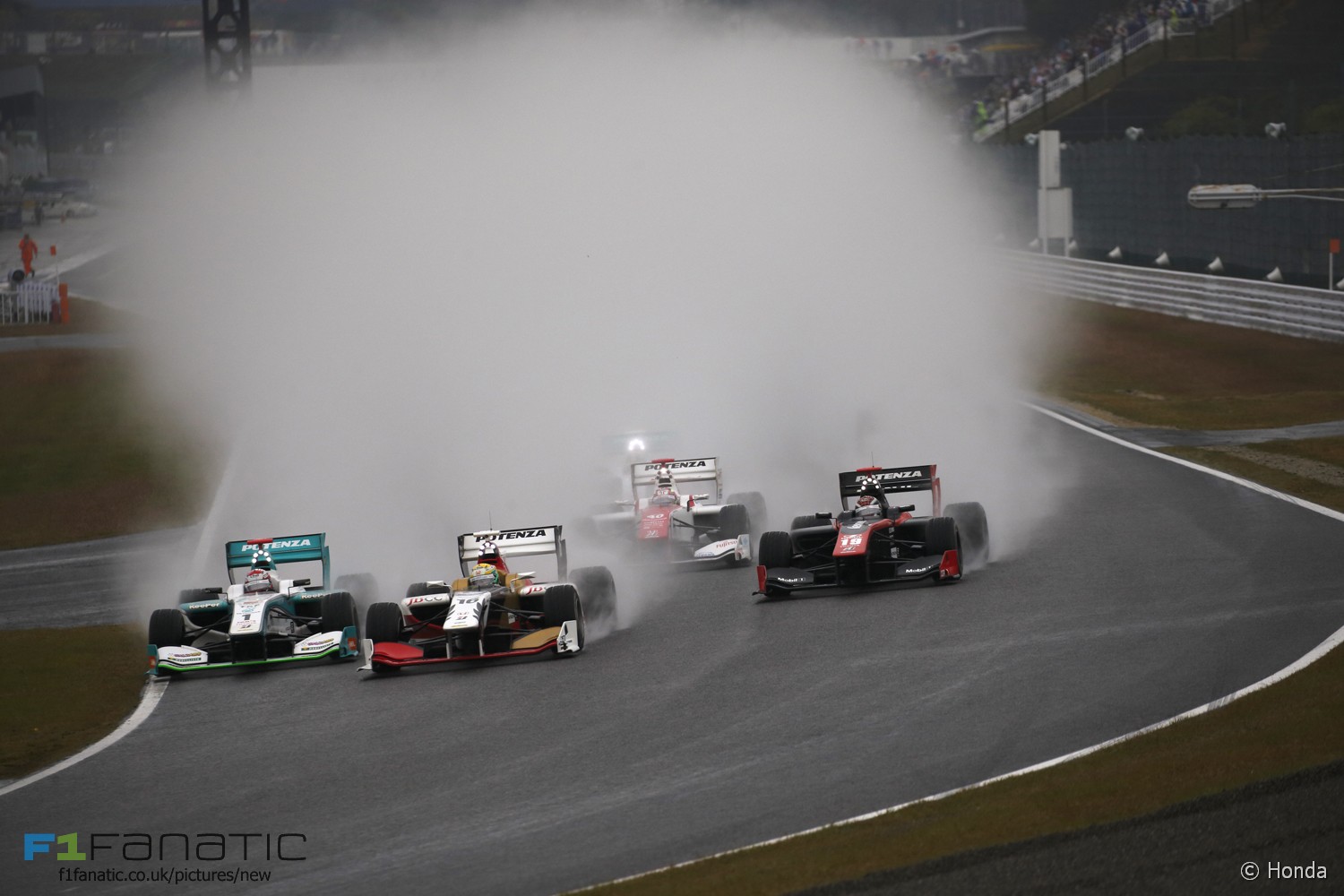 The 2015 F1 season didn’t serve up many great races but there was plenty of exciting action elsewhere – much of which we featured in Weekend Racing Wrap during the season.

Here are my ten favourite car races of the last 12 months from outside F1.

It became clear we were on for a close fight in the championship and the upcoming Le Mans 24 Hours after another gripping encounter between Audi and Porsche in the World Endurance Championship at Spa. The Marcel Fassler/Andre Lotterer/Benoît Treluyer Audi took the flag just 13 seconds ahead of the Romain Dumas/Neel Jani/Marc Lieb Porsche.

Juan Pablo Montoya won the Indianapolis 500 for a second time after a scintillating scrap with Penske team mate Will Power. Watch the full race above.

In a wide open season, eight drivers arrived at the final weekend of the Formula Renault 2.0 Eurocup with a shot at the title, and three were still in the running at the final race. Long before then, Jake Hughes chased down and passed Ukyo Sasahara for victory on the last lap at Spa.

Formula Renault 3.5 champion Oliver Rowland was made to work hard for his title by rival Matthieu Vaxiviere. Nowhere was that more true than at Rowland’s home race, where Vaxiviere piled on the pressure after losing the lead during the mandatory pit stop. Rowland clung on for a vital victory.

While Felix Rosenqvist took a widely-expected title victory, rookie Charles Leclerc stepped into Max Verstappen’s old car and turned in a few performances the Formula One star would have been proud of. In his sixth start he passed Rosenqvist – racing in F3 for his sixth year – at a slippery Hockenheimring en route to victory.

A surprise rookie performance, fiercely fighting championship contenders, and a few controversial collisions – the third BTCC race at Donington Park had it all.

The World Touring Car Championship at Moscow Raceway: Neither a championship nor a circuit synonymous with great racing. And yet that’s exactly what it served up as ex-F1 racer Tiago Monteiro inflicted a rare defeat on the all-conquering Citroens in a thrilling encounter.

The Bathurst 1000 usually supplies the action to justify its place as one of the world’s top racing events. This year was no exception as a rain shower added a dramatic twist to proceedings and the top runners crossed the line just a second apart after a thousand kilometres of racing.

Eight laps of craziness defined the conclusion of Formula E’s return to the Putrajaya street circuit in Malaysia for the second race of their second season. Lucas di Grassi got his car home first while Robin Frijns dragged his wounded machine across the line in third after being one of several drivers to hit the wall.

Rain, Suzuka and arguably the fastest cars outside of F1 is a recipe for seriously good racing. And in the penultimate race of the year the championship was hanging in the balance as well. While Andre Lotterer led from lights to flag, eventual champion Hiroaki Ishiura withstood a fierce attack from ex-F1 man Kamui Kobayashi while a crash for James Rossiter allowed Kazuki Nakajima to keep his title hopes alive.

The second GP3 race at Monza, Italy also deserves a mention. Pole sitter Luca Ghiotto stalled, handing the initiative to championship rival Esteban Ocon who led the field to turn one. But an inspired Emil Bernstorff charged to the front to deny him.

However because of FOM restrictions you’ll have to head to the GP3 website to watch footage of this one.

What were your favourite races of the year on four wheels – or fewer? Have your say and share links to the footage in the comments.