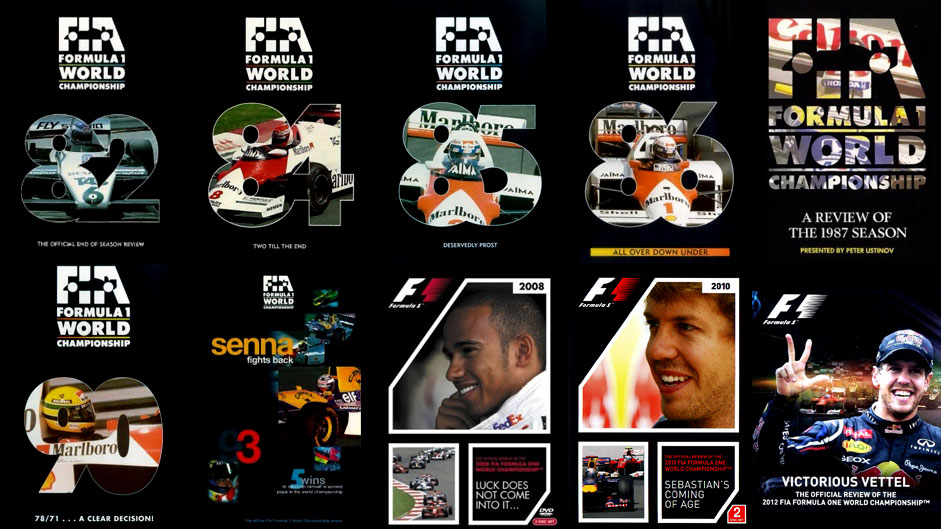 We’re mired in the depths of the off-season: it’s a month until the first test begins and the first race is two months off.

It’s time to dust off that collection of Formula One videos, fill in the gaps and ease the withdrawal symptoms.

But where to start? Here’s F1 Fanatic’s verdict on the ten best official Formula One season review videos.

The Formula One Constructors’ Association (now FOM) began producing official season review videos in 1981. Their first effort was a rather haphazard affair, but for 1982 they hit upon the apparently-not-obvious idea of showing highlights of each round in chronological order.

In an inspired move, they also hired Clive James – already a well-known author and television critic – to lend his wit to the voiceover. James narrated three such videos, all of which appear in this list and are littered with his dry-witted gems. “The Brabham drum majorettes did the dance of the pneumatic wrench,” he intones as Bernie Ecclestone’s crew scamper around Nelson Piquet’s BT52.

It’s not all laughs, though. Two drivers were killed during the 1982 season and both crashes – Gilles Villeneuve in Belgium and Ricardo Paletti in Canada – are shown in the video. James strikes a suitably remorseful tone but it’s remarkable to see that even as recently as the early eighties it was thought appropriate to include the material to begin with.

Skipping over the so-bad-it’s-bad 1983 review video (seriously, don’t bother), the return of Clive James makes the 1984 video another must-watch. But while the 1982 season served up a record 11 different winners, 1984 was a McLaren benefit. Even so, this was the closest championship of all time – Niki Lauda pipping Alain Prost by a mere half-point.

Another colourful and dramatic chapter of the turbo era, highlights include the rise to prominence of young rookie Ayrton Senna and a crazy race on a disintegrating track in Dallas.

With James on hand to lend a wry view on the year’s proceedings, this is another welcome reminder of the days when F1 didn’t take itself excruciatingly seriously.

Truthfully, the 1985 video drags in places, but it gets a place on this list for its concept: instead of bringing in a narrator to describe the events of the year, have the drivers do it themselves.

The results are variable at best, but with the likes of Ayrton Senna, Alain Prost, Nelson Piquet and Nigel Mansell narrating the races there are some real highlights – including Senna narrating his first F1 victory at Estoril in 1985. The dependable Simon Taylor fills in the story between each round.

Inevitably some drivers clearly put more effort into preparing for their stints on microphone than others (Piquet), but that adds to the entertainment. And while you wouldn’t want an entire season of races to be covered this way, this is a concept which should definitely be revived as a ‘DVD extra’.

Clive James-era F1 season review videos are as quotable as cult films like Withnail and I or Happy Gilmore. The last of them is arguably the best as the 1986 championship was resolved in a stunning three-way fight around the streets of Adelaide which was decided when Mansell’s tyre blew.

The Williams driver was at the heart of many of the dramatic moments captured in this video, including his clash with Senna in Brazil, the photo-finish between the pair in Spain and Mansell’s simmering rivalry with F1’s other top Brazilian of the time, his team mate Nelson Piquet.

The dodgy gender politics of mid-eighties television is also in evidence here, but while that may not be missed sadly the services of Clive James were not called on again after this tape. However he did return to front a hilarious one-off F1 special for ITV in 1997.

“The Chinese have a lot to teach the Germans about walls” mulls Peter Ustinov in his off-the-wall introduction to the 1987 season review which sets the tone for what is to follow. The video concludes with him standing besides Checkpoint Charlie impersonating a two-stroke engine.

In between these bursts of randomness are well-chosen highlights from a season which was increasingly dominated by Williams and Honda, but still featured some memorable races – not least of which the Mansell-Piquet showdown at Silverstone.

Technological advances in the shape of early onboard cameras and even a smattering of Senna’s team radio at Spa make this feel more like a contemporary review in places – right down to Ustinov’s unwillingness to elaborate on the reasons behind the cancelled Canadian Grand Prix.

The 1990 season will forever be remembered for the title-deciding crash between Senna and Prost at Suzuka.

But it also featured one of the greatest overtaking moves of all time by Mansell in Mexico City, a pair of surprise wins for Piquet and a real oddball race at the Hungaroring, won by Theirry Boutsen. Unfortunately the golden age of tail-end Charlies – Coloni-Subaru, EuroBrun, Life… – is given very little coverage.

The commentary is more functional than stylish, but a decent helping of interviews with the drivers adds some much-needed colour. Add it to the 1988 and 1989 reviews for the complete Senna-vs-Prost trilogy.

Skip the serviceable 1991 video and dreary 1992 Mansell-fest in favour of the last F1 season review video to feature a truly entertaining commentary. Jonathan Ross is the surprising but amusing choice of narrator for a season which began well before lapsing into race after race of crushing Williams dominance.

Virtuoso Senna drives at Interlagos and Donington Park are the highlights but it’s his brief encounters with Michael Schumacher which leave you wondering what might have been in the second half of the nineties.

Ross keeps things light with the commentary but the intense behind-the-scenes political wrangling which led to an overhaul of the rules in 1994 is largely ignored. That does make it easier to appreciate the action, though.

Endless shots of refuelling pit stops and jarring ‘as-live’ commentary explain why we’ve jumped forwards 15 years. Though at a pinch the 1997 and 2003 videos are worth a look, and the early DVD reviews of 2000 and 2001 which were packaged with the official games of the time are intriguing curiosities.

Things took a step forward in 2008 when top commentator Ben Edwards was finally allowed to use the past tense. On top of that the review added a stack of previously unseen footage and a raft of bonus features. The season itself culminated in one of the most stunning races of all time.

Aside from the predictably dreadful title – ‘Luck Does Not Come Into It’ – the 2008 review was a long overdue return to form.

Formula One Management still hadn’t got around to broadcasting the races in high definition by 2010, so this is the final review which is only available in standard definition.

Much as with the 2008 review, this was a polished product which told the story of a particularly excellent F1 season. The post-refuelling, pre-gimmick 2010 season saw four drivers arrive at the final race with a shot at the title and Sebastian Vettel snatch the crown from a stunning Fernando Alonso.

The modern reviews may lack the humour of the early ones, but the huge amount of footage FOM now shoots every weekend means there’s invariable new material to discover. The extended onboard highlights first seen on the 2010 disc are a great example of that.

The sprawling seven-hour high-definition review of the 2012 season marks the high point of recent reviews (the much shorter DVD version is to be avoided).

Of course it helped matters that the championship went the full 20 rounds, culminating in an even more intense finale than the one four years previously.

Over the past 35 years Formula One’s official season reviews have mirrored the championship itself in becoming more polished and professional but also somewhat colourless and bland. And they continue to lag behind the times when it comes to distribution – the videos are not available to stream or download, cutting F1 off from a generation of on-demand television viewers who may not own video tape, DVD or even Blu-Ray players.

Which of the official F1 season reviews do you own? Which are your favourites?

Do you have a top ten of your own? Share your views in the comments.