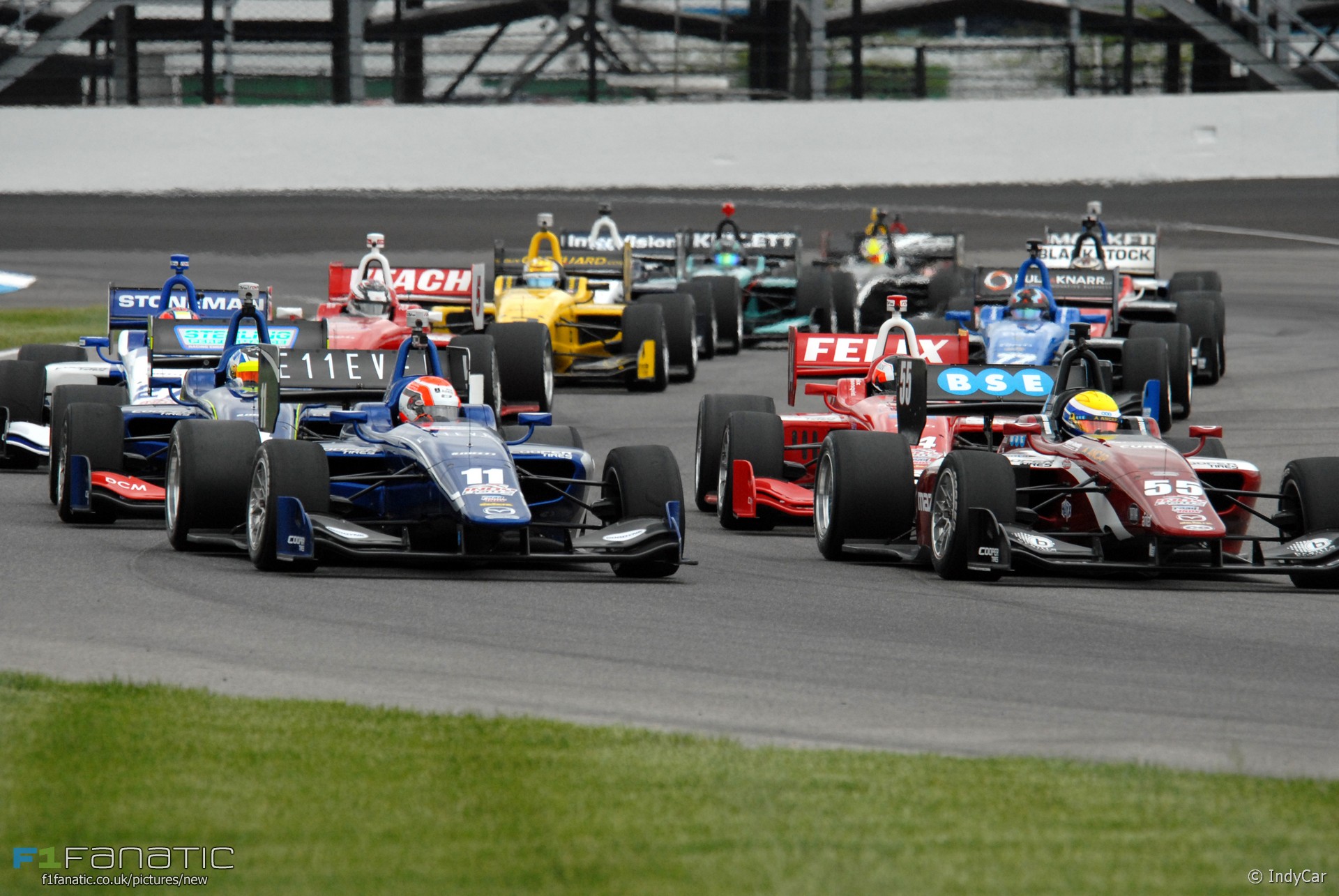 A last-lap exchange of positions between team mates changed the destiny of the 2016 Indy Lights championship at Laguna Seca.

Also last weekend Stoffel Vandoorne became a race-winner in Japanese Super Formula at the former home of the Pacific Grand Prix. Meanwhile Lance Stroll, who may join him on the F1 grid next year, moved a step closer to clinching the European Formula Three championship.

Marco Wittmann in the DTM and Tom Dillmann in Formula V8 3.5 also strengthened their positions as those series moved into the final phase. And NASCAR is poised to begin its Chase for the Cup.

Santiago Urrutia was poised to clinch the championship as the final lap of the 2016 Indy Lights season began at Laguna Seca. It promised to be an emotional triumph on the 17th anniversary of the death of fellow Uruguayan Gonzalo Rodriguez in a CART IndyCar event at the track.

Urrutia, running second, was on course to tie with fifth-placed Ed Jones on points at the top of the table and take the crown by dint of having won four races to his rival’s two. However Jones had Carlin team mate Felix Serrales ahead of him, and on the final tour the pair swapped places, handing the title to Jones.

“Felix had a problem on the last lap and allowed me past,” Jones explained immediately after the race, notwithstanding that Serrales had followed him home in fifth with little difficulty.

Urrutia had arrived at the double-header finale one point ahead of Jones in the standings. However the Carlin driver moved ahead in the points by finishing ahead in race one, won by Kyle Kaiser. Zach Veach led the field home in race two.

Future McLaren driver Stoffel Vandoorne took the first win of his Super Formula career in the opening round of the double-header at Okayama.

Pole sitter Kazuki Nakajima was demoted to the back of the grid when he stopped on the wrong grid spot for the start, leaving Yuji Kunimoto ahead of Vandoorne on the new front row. The 2017 McLaren driver took the lead before turn one and pulled away, holding a five second advantage to Kunimoto throughout. Narain Karthikeyan finished third.

The longer race two, which added a pit stop to the mix, was won by Kunimoto who came in on the second lap of 51. Tomoki Nojiri and Hiroaki Ishiura headed the field early on, but the early pitters were catching the leaders throughout, and on lap 22, Nojiri conceded the lead.

A Karthikeyan spin on lap 31 brought out a Safety Car, ruining Ishiura’s chances as he pitted shortly afterwards. At the restart Kunimoto held the lead ahead of Nakajima with Ishiura third, and that was how it stayed until the end. Andre Lotterer took fourth while Vandorrne finished seventh.

In one of the most open contests in international motor racing, all drivers remain capable of winning this year’s title with three races remaining. Kunimoto heads the standings on 23.5 points but any one of eight drivers could take the lead at the next round.

Lance Stroll – the Williams junior driver who is considered a top candidate to replace Felipe Massa at the team next season – won his eighth and ninth races of the season at the Nurburgring to open up a 68-point lead with two rounds to go.

Stroll won a relatively uneventful opening race from closest rival Maximilian Gunther, with George Russell joining the pair on the podium. Gunther got the jump on Stroll at the start of race two, but was eventually reeled in by his team mate and overtaken, having to settle for second again ahead of Joel Eriksson.

Gunther got his own back in race three however, where he drove a faultless race to hold off Stroll and minimise the points loss in the championship. Niko Kari, returning after his GP3 outing at Spa, took the final podium spot.

Matthieu Vaxiviere took his his second win of the season in race one at the Red Bull Ring. He passed pole sitter Louis Deletraz off the line, though the Fortec driver recovered to take second place from Egor Orudzhev. Deletraz cut Vaxiviere’s lead from 3.5 seconds to just half a second but was kept at bay by his rival’s canny DRS use. Championship leader Tom Dillmann took third after Orudzhev retired in the pits late.

Aurelien Panis took race two honours ahead of Dillmann, meaning he also left Austria with his second win of the year. From fifth, Panis passed Roy Nissany at the start before taking his mandatory stop as soon as he could on lap 8 and setting a blistering pace which saw him take the lead following the end of the pit stop window on lap 16. Dillmann finished second having chosen to pit as late as possible, and Matevos Isaakyan took the final podium spot. Deletraz and Orudzhev fought hard on their way to fourth and fifth respectively.

Video not available yet

Marco Wittmann comfortably won the opening race from the pole position he inherited from Lucas Auer who had a five place grid penalty. He was followed home by BMW team mate Tom Blomqvist. Jamie Green took third after overtaking Daniel Juncadella on the exit of turn one on the opening lap.

Edoardo Mortara won the second race after a good start and excellent strategy calls vaulted him up the field. Mortara gained two places at the start and two more in the pit stop phase to put him second behind pole sitter Auer whom he dispatched with ease, with championship leader Wittmann completing the podium. Witmann retains a 33-point lead over Mortara at the top of the table.

Round 26 of 36: Richmond International Raceway

Denny Hamlin won the Federated Auto Parts 400 at his home track, the Richmond International Raceway. The crazy race saw a record 16 cautions in the final event of the ‘Regular Season’, and Hamlin took control after the eighth of these on lap 322 to take the honours.

The controversial ‘Chase for the Cup’ begins at the next round, in which 16 of the 43 enter a knock-out sequence to decide this year’s champion. They comprise the 13 race winners and three highest other points scorers. Defending champion Kyle Busch is among them and, for the first time, a pair of rookies: Chris Buescher and Chase Elliot.

Moto GP run of different winners rose to eight in as Dani Pedrosa swept to his first victory of the season at Misano. He was joined on the podium by Yamaha duo Valentino Rossi and Jorge Lorenzo, with championship leader Marc Marquez fourth.

Thanks to Robert Mathershaw (@Mathers) for contributing to this article.