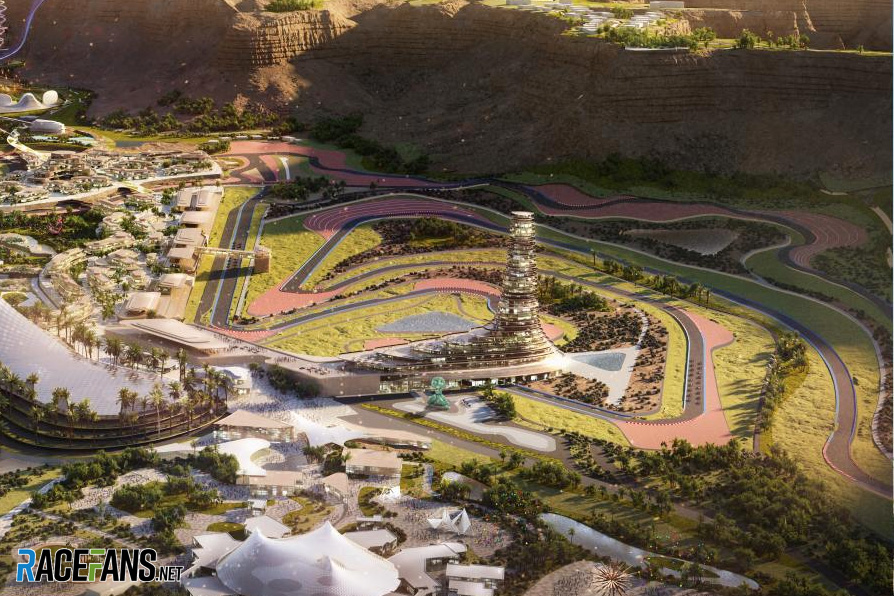 That Formula 1 has designs on a grand prix in the Kingdom of Saudi Arabia – thus a third round in the region – has not come out of the blue. As described here last week, during a broadcast recording for Middle Eastern Middle East Broadcasting (MBC), one of the leading questions I was asked referred to a third race in the Middle East.

It is also known that F1 CEO Chase Carey and his commercial lieutenant Sean Bratches numerously visited Saudi during F1’s last off-season. This was ostensibly to seal the five-year, $50m-per-annum deal with MBC, which was founded almost 30 years ago by Saudi businessman Waleed bin Ibrahim Al Ibrahim, as replacement for the lapsed contract with Qatar’s BeIn Sport media group.

However, their interest was clearly piqued when they heard about ambitious plans to create a massive entertainment city in Qiddiya.

It is known that Bratches visited the region intensively during January/February this year, during which tentative talks for a third grand prix in the region were held. With overall reductions in hosting fees looming for F1 – Vietnam’s contract is said to be the most modest in recent times – a race in Miami has been ‘indefinitely’ postponed and little prospect of an African race, F1 needs to land a big payday soon.

Crucially, despite the value of MBC’s contract – thought to be F1’s second-most-lucrative F1 TV deal – race broadcasts are offered on a free-to-air basis to 22 countries in the greater Arabic-speaking region. This alone provides a pointer to the ambitions of the Saudis who, of course, first entered F1 in 1977 as partner to Williams, and whose Mansour Ojjeh is a major shareholder in McLaren and owned the TAG Group.

Located around an hour from Riyadh, Qiddiya is situated in a mountainous region, and thus lends itself to various activities. Working with Test and Training International, the motorsport consultancy headed by former F1 driver and Le Mans winner Alexander Wurz, the plan is to create a world-class circuit capable of hosting all FIA categories through to F1. However, Wurz’s involvement in this project is thought to extend well beyond purely circuit design.

According to sources, the circuit will be the longest and most spectacular such facility in the world. At its full extent, the circuit’s lap length will exceed Spa-Francorchamps’ 7.004 kilometres, currently the longest in F1. Several unique and radical features are planned, such as cars passing under an illuminated aquarium and a big dipper that mimics on-track action. There are also expected to be numerous elevation changes.

Media reports suggest that the first Saudi Arabia Grand Prix could be hosted in 2021; however, given the magnitude of the overall project, these are thought to be wide off the mark. A source with knowledge of the situation stated that 2022 would be he earliest a grand prix could be staged. Qiddiya will, though, host the start of the Dakar next year after a five-year deal for the event was struck recently.

Thus, within three years, Saudi Arabia could host the Dakar, Formula E on the streets of Diriyah in Riyadh, and Formula 1, having previously shown little interest in international motorsport save for regional championship rallies before the electric series signed its historic deal.

In Hungary, during his regular team boss debrief, Carey canvassed the opinions of teams on issues such as human rights, gender equality and media freedom as a precursor to further talks about the race, particularly one hosted in a country currently facing criticism over recent events. Team bosses are said to have been ‘cautiously positive’ about the project.

Although Bahrain is said to have a veto over races in the Middle East – and allegedly blocked a race in Qatar on that basis – a Bahrain Grand Prix executive confirmed last year that the country holds a ‘soft’ option granted by previous F1 CEO Bernie Ecclestone in exchange for their early commitment to F1 in the region.

As the political record shows, the relationship between Bahrain and Saudi is both symbiotic and positively neighbourly, while the distance between Riyadh and Manama runs to almost 500km. By contrast, an alliance of Middle East states – crucially including both Saudi and Bahrain (and the UAE) – opposes certain of Qatar’s political policies, and have formed a blockade against the latter, including bans on air travel.

Given this background, Bahrain is unlikely to invoke any veto it may have against a further race in the Middle East and thus a grand prix in Saudi Arabia in 2022 looks highly realistic.