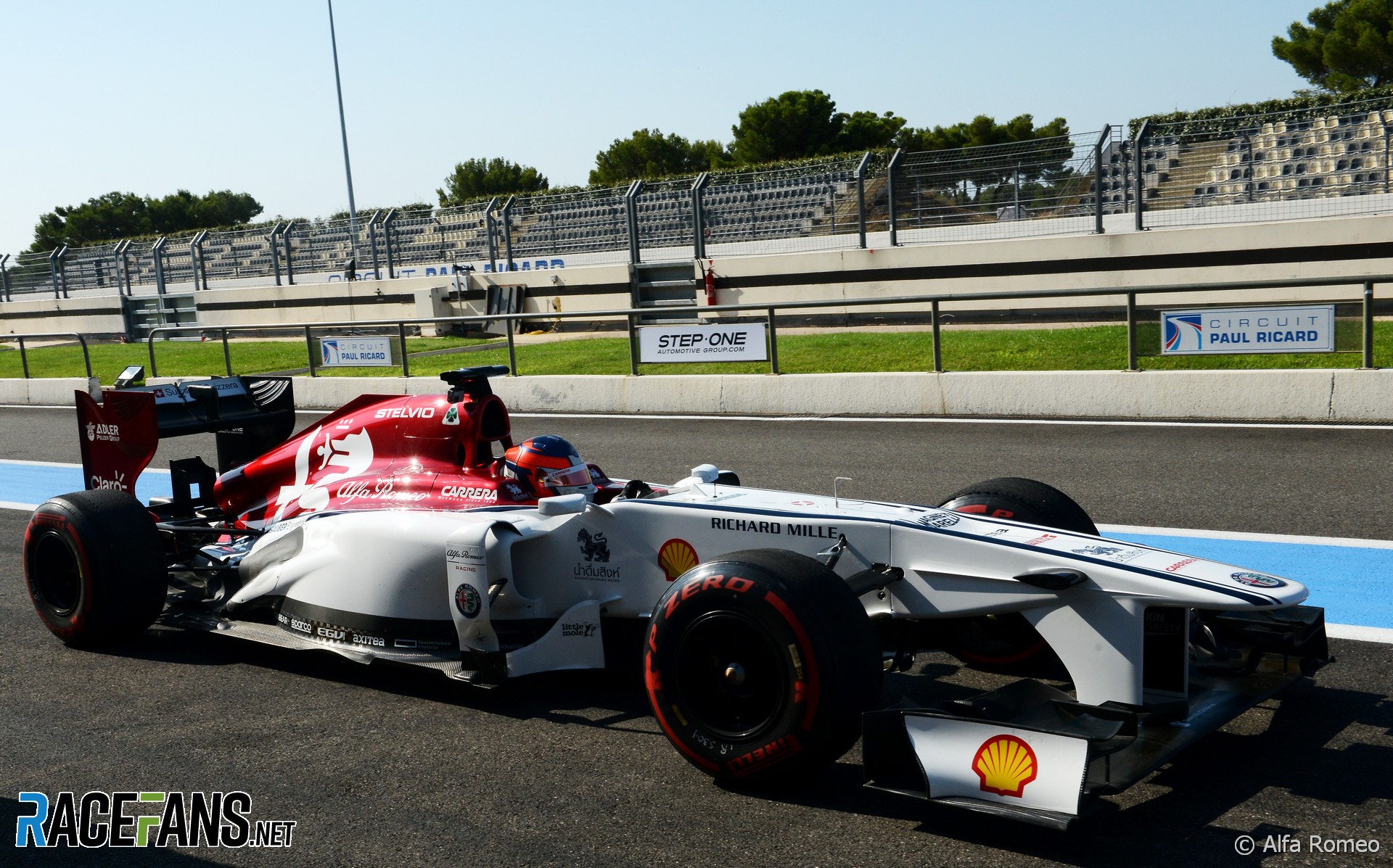 Alfa Romeo is running a test this weekend for F2 drivers Tatiana Calderon and Juan Manuel Correa. But instead of driving a recent V6 hybrid turbo car, the pair are running a 2013-specification machine with a V8 engine.

Why do teams still prefer to use the old kit for tests like this and demonstration runs? @DieterRencken explains.

Demonstration runs are designed to ‘wow’ the crowds, whether they be at demos runs such as those staged regularly across the globe by Red Bull, or at one of F1’s official fan festivals. Anybody who has heard one of those screaming 18,500rpm, open-exhausted 2006-2013 V8s running cannot fail to be impressed, even if the cars are driven in semi-anger under controlled conditions on a tight ‘circuit’.

The reason for the choice of power unit is simple: There are plenty of (relatively) cheap powertrains around, plus teams have eight seasons of cars to choose from. Even allowing for museum pieces and sell-offs, most would have access to at least 10 cars from that period. Those which don’t use cars from other teams painted in a suitable livery. While dedicated F1 fans may spot the differences between wings and paint schemes, demonstration runs are a means of attracting new fans, and they are not going to know.

The question, though, is whether these demo runs send out the right message: On the one hand F1 punts its hybrid message, powered by, of necessity, turbo-dampened engines; on the other, the sport markets itself via ancient technologies that are, if anything, massively misleading. Imagine being sufficiently enthralled by V8 engine wails to shell a few hundred quid for a grand prix ticket, then find the real thing is rather quieter.

For years Red Bull boss Christian Horner banged on about how wonderful the V8s were understandable given his team creamed both titles for four years on the bounce with those old iron units. But I note he’s changed his tune since receiving (free) Honda power after five years of paying top dollar for Renaults.

The use of V8 units for unofficial young driver tests is, if anything, more bewildering: The same commercial and logistics reasons apply as above, but surely the objective of F1 seat time is to evaluate a youngster’s potential as F1 driver, and that can surely only be determined by sticking him in a car as current as the regulations permit.

A Formula 1 driver’s job is primarily to master the technology of the day, and thus evaluating a driver through the use of antiquated technology – think 80bhp push-to-pass KERS bolted to a 700bhp V8 – hardly provides an indicator of how well he/she will fare in a current car boosted to 1,000bhp by a turbo and double the hybrid complement. Now factor in tricky brake-by-wire systems, plus a gazillion mode settings.

Teams are allowed to run the V6 cars: Clause 10.2 of the Sporting Regulations allows “Testing of Previous Cars (TPC)”, provided the car was ‘”designed and built to comply with the Formula One Technical Regulations of any of the three calendar years falling immediately prior to the calendar year preceding the Championship”. Teams may therefore use cars complying with the 2015-17 regulations, provided they are “built to the specification of the period.”

Another requirement is that they use “only tyres manufactured specifically for this purpose.”

Testing of Historic Cars (THC) is permitted “using cars which were designed and built in order to comply with Formula One Technical Regulations in force during the years preceding 2015”. So the decision to test Tatiana Calderon and Juan Manuel Correa at Paul Ricard with a 2013-spec (V8) C32 is curious given that the team could legally run a hybrid-specification C33. That would surely provide more relevant benchmarks.

However, such tests would mean prying hybrid-spec engines out of Ferrari. Therefore I believe the decision rests mainly on economic and promotional factors, rather than being runs undertaken primarily for driver evaluation purposes. Given their low FIA superlicence points tallies, both drivers are some way from being ready to step up to F1.

The introduction of new technical regulations for the 2021 F1 season will create further complications. This will see, among other changes, a switch to 18-inch wheels. Will Pirelli be required to continue providing 13-inch rubber for demo runs and unofficial tests? If so, the older cars are going to be even further from the current standard.

35 comments on “Why do Formula 1 teams still use their old V8 cars so often?”