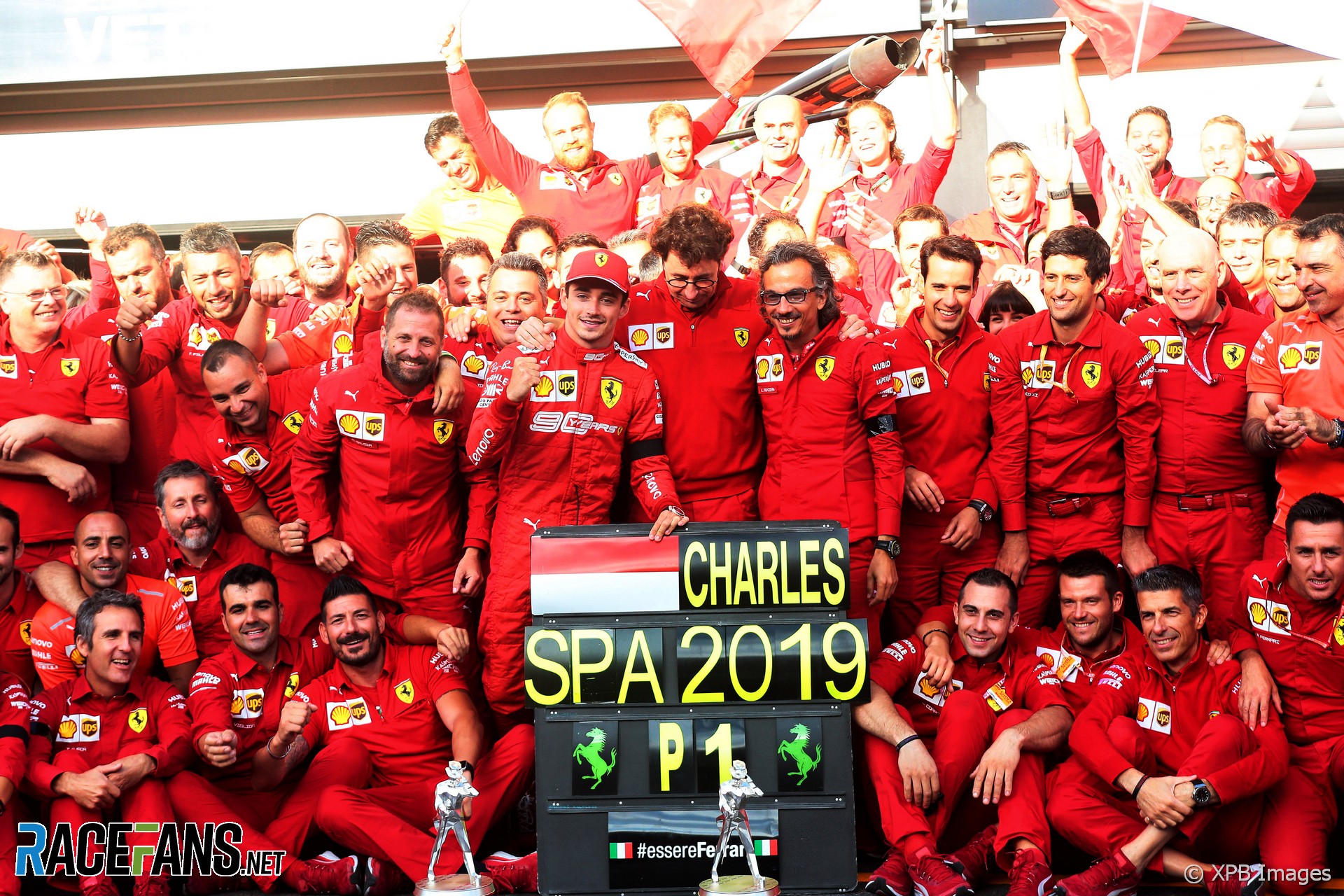 Ferrari’s breakthrough first victory of 2019 at Spa last weekend will have come as a huge relief to the team, to say nothing of their millions of fans.

Even so, it required the use of Sebastian Vettel as a sacrificial pawn to achieve a maiden win for Charles Leclerc. Despite locking out the front row, the red cars sandwiched the two Mercedes at the finish.

Why did it take so long? If we cast our minds back to pre-season testing, Ferrari were the pace-setter. True, the team faltered in Melbourne but came back strongly in Bahrain – only to blow that race through mechanical misfortune. On two other occasions – Canada and Austria – the team was strongly in the hunt but ultimately lost out to, respectively, Mercedes and Red Bull.

When the championship resumed at Spa last week the score was Mercedes 10, Red Bull 2, Ferrari 0. Clearly Ferrari had to win, or face its home race in Monza with the longest win-less streak since 2016. Equally, it has gone eight years without an Italian Grand Prix win, equally its eighties slump.

Although Ferrari failed to win a race in 2016, during the subsequent two seasons it had at least posted strong early showings, taking four wins through to the Hungarian Grand Prix in both 2017 and 2018 versus zero until this year.

Clearly that is an unacceptable situation given Ferrari has the largest budget, receives $100m per year simply to show up and in Vettel has a four-time world champion on its books…

The reasons for the (non) performance of a team are both varied and complex, but ultimately boil to one core factor: management. Am I therefore blaming Mattia Binotto, who took over as team principal in January? On the contrary, I firmly believe the Swiss is doing a fine sporting job under the circumstances with which he has been saddled.

As always, ultimate blame lies at the top of any organisation, and in my opinion the buck stops on the desk of Louis C Camilleri, Ferrari CEO, or even a level up in the heady office of president John Elkann. They collectively made the appointment of Binotto as replacement for Maurizio Arrivabene, the gruff, bearded former Marlboro Marketing Man, who failed to maintain the all-important political relationships within the sport.

Camilleri and Elkann installed Binotto unto the grand plan designed by Sergio Marchionne, the corporate whirlwind who ruled Ferrari (and Fiat Chrysler Automobiles and much more beside) with hard-headed logic until his untimely death in July last year. The Italo-Canadian planned to retire from FCA duties in early 2019, staying on as CEO of Ferrari, having spun off the company on the New York Stock Exchange in 2015.

Marchionne planned to focus purely on Maranello, retaining a hands-on executive role and having a number of senior managers report directly to him. Binotto would have responsibility for sporting side, but, crucially, not Formula 1’s complex commercial or political activities. These the battle-hardened taskmaster would handle himself, leaving the clearly capable Swiss engineer to focus on nuts and bolts.

This would have been not unlike the plan adopted by Luca Montezemolo during Ferrari’s halcyon days: the aristocratic Italian busied himself with F1’s political and commercial aspects, while Jean Todt masterminded Michael Schumacher’s routing of the opposition.

When Todt – now FIA president – left, he was replaced by Stefano Domenicali, but the modus operandi stayed the same. Any wonder Marchionne planned Ferrari’s future around this proven structure?

But in July last year the man dubbed ‘one of the boldest business leaders of his generation’ by Financial Times died unexpectedly. Camilleri was hurriedly appointed in his place, but he brought comparatively less contemporary F1 insight, having stood down from his Philip Morris chairman/CEO role, where Ferrari’s commercial partnership fell indirectly under his control, in 2013.

Right now, F1 is undergoing the most crucial phase of its pots-2020 ‘new era’ negotiations, with its technical/sporting, governance process and commercial agreements – and Ferrari’s controversial veto power – all under review. These issues Marchionne would have dispensed with before breakfast, yet Binotto is now charged with navigating the Prancing Stallion through some choppy waters in F1’s piranha tank.

This explains why Ferrari’s on-track performance has slipped. Binotto has been forced to take on two crucial – yet totally divergent – roles, having been tasked at extremely short notice to lead Ferrari on-track and into F1’s (as yet) undefined and complex future?

Arguably the same key performance areas not also apply to Toto Wolff, who is currently leading Mercedes to unprecedented levels of on-track success, while simultaneously playing a major role in defining F1’s future. But there is a crucial difference between the two: When Toto slid his feet under the silver desk in late 2013, F1’s 2013-2020 structures were in place, and he had gained an insight into the processes while a Williams shareholder from 2009.