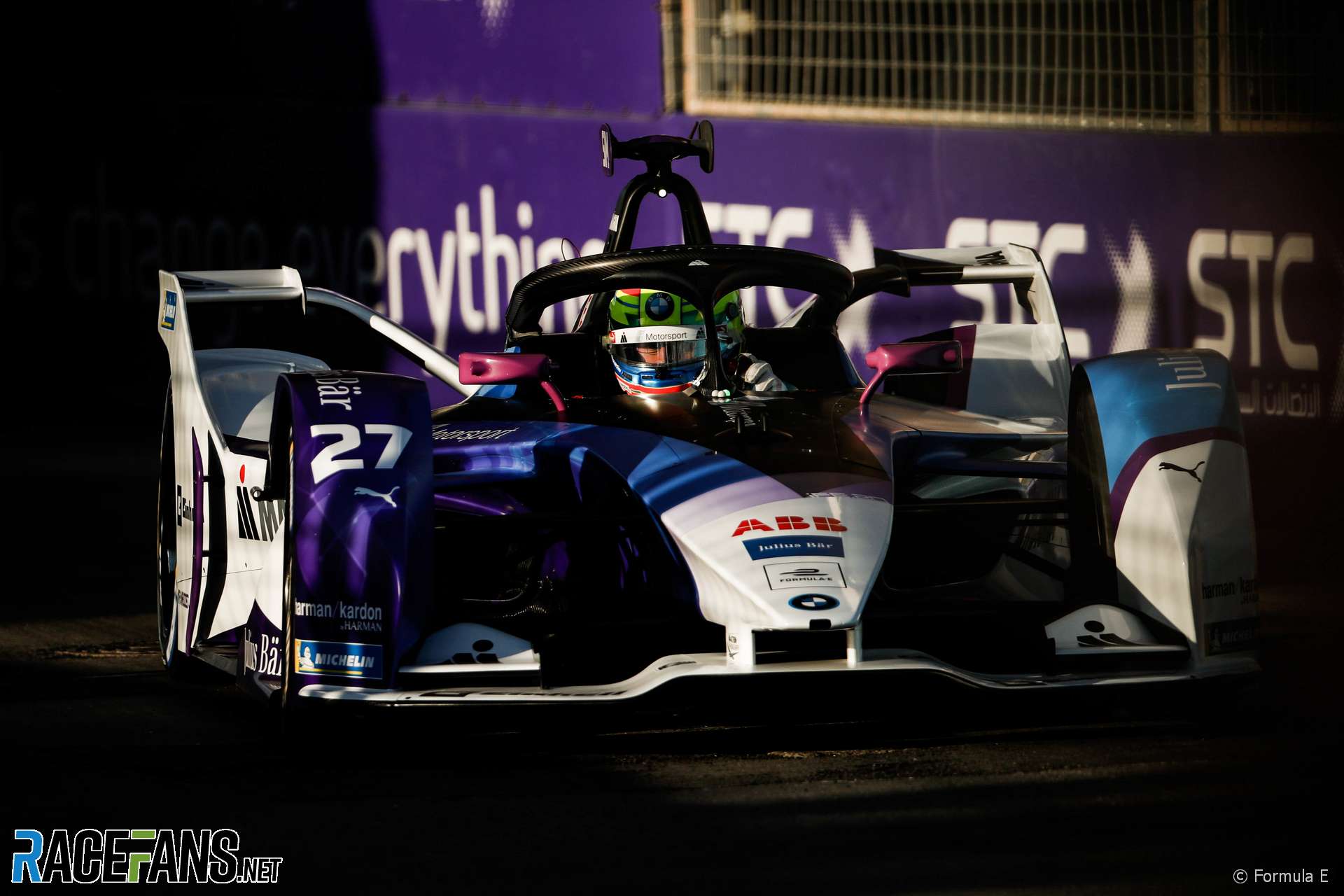 Alexander Sims will start the first race of Formula E’s 2019-20 season on pole position after seeing off a stern challenge from championship newcomers Mercedes.

The silver cars of Stoffel Vandoorne and Nyck de Vries took second and third on the grid for their first race in the championship.

Whereas last year heavy rain masked the Diriyah track’s dust problem, the extent of dirty track was obvious this year. The running order for the group qualifying format was decided by the finishing positions in the previous championship season. It was clear the track would likely develop to the advantage of later groups here – potentially offering opportunities to newcomers such as Mercedes and Porsche, each with one new driver to the championship in their squads.

The first group had the most severe case of ‘chequered-flag chicken’ affecting qualifying, with no car willing to be the first out. Antonio Felix da Costa suffered a brake failure in the garage just before the session but was sent out anyway, and told to go straight to a 250kW lap rather than risk an install.

His lap resulted in both an unimpressive time and a brush with the barriers while Mitch Evans led a train of the rest of the group across the line. Buemi, at the back of the order, looked at risk of not making the chequered flag for a hot lap and although Evans managed to slip back behind Di Grassi before going to 250kW, this bunched the cars rather than giving him any advantage and left them in a nose-to-tail squeeze.

Vergne topped the group but none of the times – four seconds slower than those set in practice – looked set to trouble the Super Pole.

With a slightly improved track, Sam Bird was able to put together a significantly better lap time than the group before. His 1:14.946 was more than three tenths clear of Jerome D’Ambrosio but both looked indicative of Super Pole standards.

Group three saw the strongest overall performances, with only a mistake by Felipe Massa and the NIO 333 car’s uncompetitive pace significantly marring times. Both Alexander Sims and Edoardo Mortara put together strong laps, separated by a thousandth but only to be beaten by a tenth by Stoffel Vandoorne, all three straight into Super Pole contention.

The fourth group, being largely populated by rookie or less experienced drivers, was always likely to be the most disrupted. Add in a dirty track that had seen even experienced drivers making errors, this became something of a group of attrition without necessarily showing true pace.

Nyck de Vries was sent out early, in what turned out to be a strategic stroke of luck for Mercedes. Despite the potential disadvantage in track development, it meant he could put together his lap cleanly while the other drivers were left tangled together. Somewhat literally, in the case of debutants Mueller and Calado, who both parked up at turn 17 during their hot laps, bringing out the yellow flags and preventing anyone else from improving.

Sam Bird had taken the fastest time of group qualifying – which now earns a single championship point – and following his strong times in free practice he looked a strong bet for pole. However Sims put together a charging lap, which coincided with an apparent reversal in the improvement of track conditions.

In the end, Sims’ time was unbeatable despite the Mercedes’ best efforts. An off-line error took Sam Bird out of contention during his hot lap. Mortara’s lap made three of the top four cars Mercedes-powered, in a very convincing debut showing on single lap pace.

10 comments on “Sims sees off Mercedes challenge for Diriyah pole”