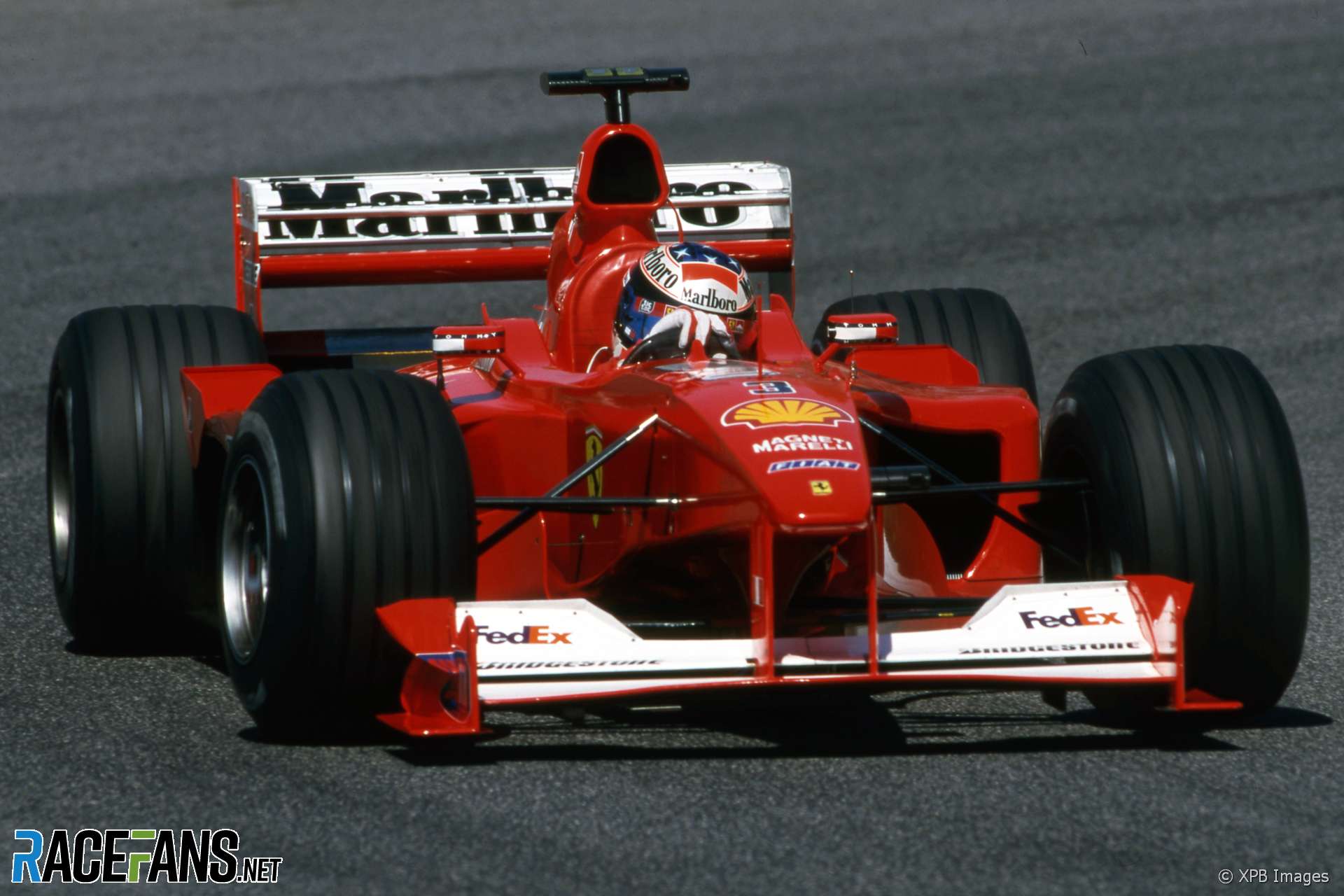 As Formula 1 began its first championship of the new millennium (or, to be pedantically correct, the last one of the previous millennium), most anticipated the season would see a continuation of the rivalry which had defined the last two years.

Mika Hakkinen had won the drivers’ championship at Michael Schumacher’s expense in the previous two seasons. But a mid-season crash at Silverstone had robbed Schumacher of the chance to push his rival to the final rounds.

With Schumacher back to full fitness for the new season, and Ferrari buoyed by their 1999 constructors’ championship triumph which delivered their first title for 16 years, Tifosi hopes were high the team would produce its first drivers’ title winner since Jody Scheckter in 1979.

For his fifth season in red, Schumacher was partnered for the first time by Rubens Barrichello. He slotted into the seat previously occupied by Eddie Irvine, and if Barrichello didn’t immediately see himself as Schumacher’s designated number two, the coming seasons would disabuse him of that notion.

At McLaren, Hakkinen was seeking a third successive title, after his injury-assisted triumph the year before. Alongside him David Coulthard who entered the season with renewed vigour and a commitment to better balance the racing and promotional demands of an F1 driver. Powered by the Mercedes engine and Ron Dennis’ trademark japery, McLaren were arguably still the team to beat.

Looking to bounce back from a disastrous 1999 season, Williams switched to BMW power, marking the German marque’s return to F1 after over a decade out of the sport. On the driver front, the ever-cheerful and obliging Ralf Schumacher was retained, partnered by F3 hot-shot Jenson Button who’d prevailed over Bruno Junqueira in a shoot-out for the seat.

Elsewhere on the grid, Benetton kept Alex Wurz and Giancarlo Fisichella, while Flavio Briatore returned to lead the team he’d taken to title success with Schumacher in the mid-nineties, in preparation for Renault’s full-time return to F1. Unnoticed by anyone except Jos Verstappen’s agent, Tora Takagi left F1, his seat at Arrows being filled by the father to then two-year-old Max. Pedro de la Rosa continued alongside him, and the team’s once empty sidepods were now occupied by a potentially lucrative sponsorship deal from Orange (that’s EE to anyone under 30 years old).

Ford’s purchase of the Stewart team, which had gone from total newcomers to race winners in just three years, was loudly trumpeted as they rebranded it Jaguar and lured Irvine from Ferrari to partner Johnny Herbert. Few imagined the team would not see real success until the global car manufacturing giant sold it to an energy drink brand five years later.

The retirement of 1996 champion Damon Hill had opened up a seat at Jordan for interviewer’s dream Jarno Trulli, with Heinz-Harald Frentzen hoping to build on his superb 1999 season that brought him two victories and third in the championship. The yellow cars retained Mugen-Honda power while 1999 newcomers BAR, despite a point-less debut, had attracted Honda power. The third champion in the field, 1997 title winner Jacques Villeneuve, remained alongside Ricardo Zonta.

[smr2020test]Albert Park held the season-opening Australian Grand Prix for the fifth time in 2020, the 5.3-kilometre parkland circuit coming into its own as the curtain raiser. Schumacher was the pace setter during Friday and Saturday practice, raising Ferrari’s expectations for qualifying.

With 60 minutes and 12 laps available to the drivers, for those at the front of the field qualifying would be all about timing track position for clear air and running down the clock for rivals. Those at the rear were more concerned with getting a time inside the 107% limit, though all managed this comfortably in Melbourne.

McLaren locked out the front row with Hakkinen emerging three-tenths quicker than Coulthard. It was arguably Coulthard who decided pole position, a late spin bringing out the red flag and ruining Schumacher’s final run, leaving him third.

At the opposite end of the grid was Button, who had a miserable first Saturday as an F1 driver, qualifying 21st after a sizeable free-practice shunt and engine niggles.

In 2019 only three drivers failed to take the chequered flag at the season-opening race in Melbourne. One of those had accident damage and another’s race was ruined by a pit stop error, leaving just one sidelined by technical failure

Cars were far less reliable 20 years ago. A string of drivers retired from the first race of 2000, leaving just 10 circulating at the flag, with points paid down to sixth place.

As the lights faded the field, except the pit lane-starting Prost of Alesi, charged to turn one, Hakkinen leading the way from Coulthard and Schumacher, the only change inside the top six came as Frentzen moved ahead of Barrichello.

In glorious sunshine, Herbert was the first to fall by the wayside, as parts of the Jaguar’s clutch made a premature bid for freedom. A bad day for the Jaguar team was compounded when Irvine spun to a halt avoiding the crashed Arrows of de la Rosa, which was pitched into the wall following suspension failure – the two stranded cars brought out the Safety Car.

Once racing resumed on lap 10, McLaren’s hopes of starting their season with a one-two were swiftly dashed. Pneumatic valve seal problems on their Mercedes engines put both out. Ron Dennis uncharacteristically responded to this double disaster by scowling.

McLaren’s maladies thus promoted Schumacher to the lead, building up an advantage over Heinz-Harald Frentzen ahead of his one and only refuelling pit stop on lap 29. Crucially Schumacher re-joined just ahead of Jarno Trulli. Barrichello was next to pit, switching to a two-stop strategy in an attempt to leapfrog Frentzen.

The pit stops briefly promoted Button from his lowly starting position to fourth. After his pit stop he was running in the final points place – sixth – when engine failure put him out.

Both Jordans were eliminated from proceedings with gearbox glitches. This helped Ralf Schumacher up into third position, behind Schumacher and Barrichello, who began their Ferrari partnership with a dream-one.

Just off the podium was Villeneuve in fourth – easily BAR’s best finish and first points score, ahead of Fisichella and Zonta. Salo originally took sixth on the road, only to lose out in the scrutineering bay due to a bodywork infringement. The only other finisher on the same lap was Wurz in the Benetton, the finishers rounded out by Gene and Heidfeld, one and two laps down respectively.

It may not have been a classic encounter, but for Schumacher and the Ferrari fans 2000 had begun in the best possible way. But McLaren clearly had a potent package, one which promised to keep the championship battle open over the remaining 16 races. The fight would continue two weeks later at Interlagos.

Did you attend this race? Did you watch it in 2000? Share your memories of this grand prix in the comments.