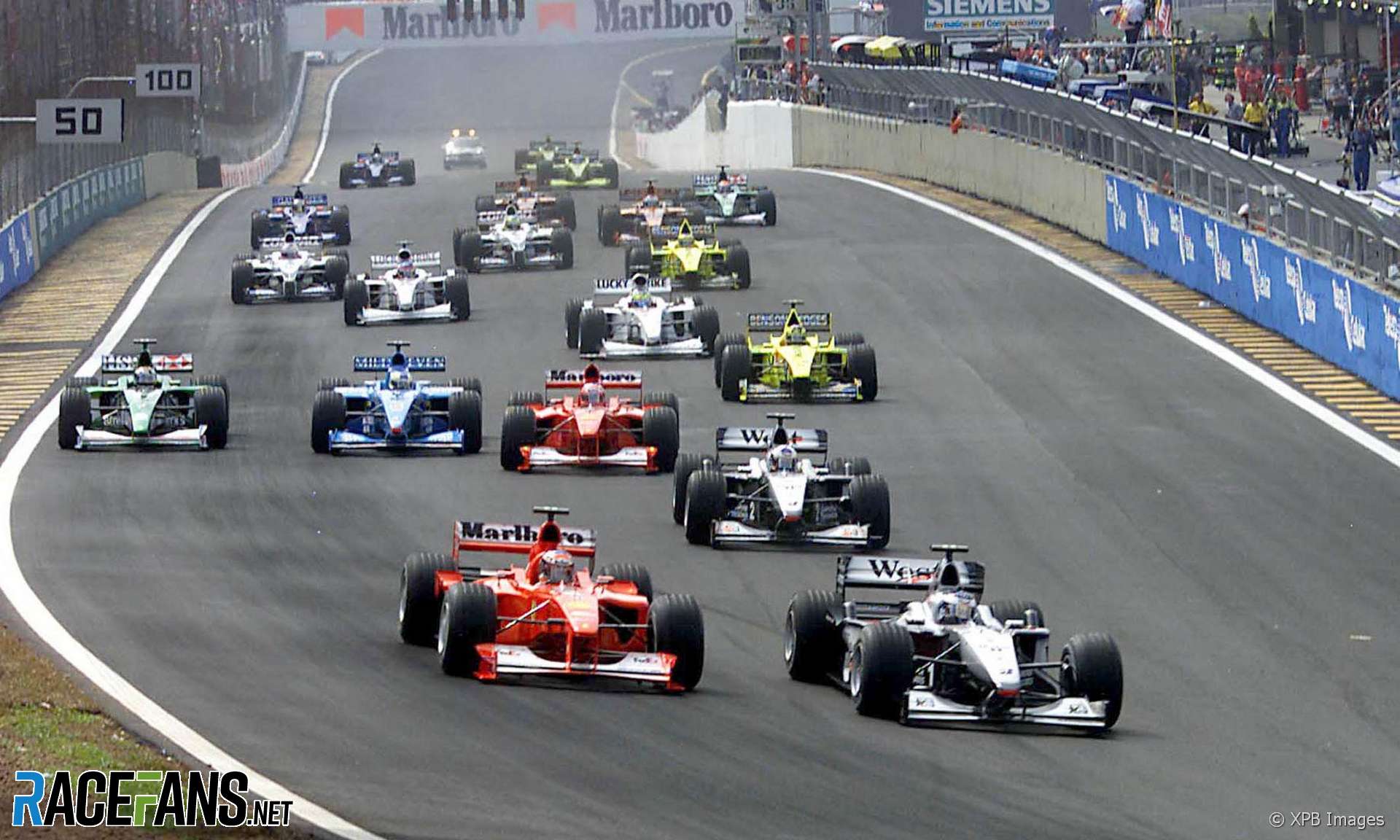 In the interval between that and the Brazilian Grand Prix, held 20 years ago today, McLaren’s perma-smiling team boss Ron Dennis reminded everyone that on pure pace Ferrari weren’t as competitive as his team. A fair if moot point, certainly for his disappointed reigning champion Mika Hakkinen, who might have pointed out that for the Finnish to finish first, the Finnish must first finish.

Then as now, Sao Paolo presented a severe driving challenge merely to reach the circuit, and wholly different one once drivers began tackling the Interlagos course. This was much the same today as it was 20 years ago, only quite a lot bumpier.

Once the cars got out on track, wings were the talking point, particularly breaking ones. Sauber withdrew from proceedings during qualifying: Mika Salo had a big off during free practice when his rear wing failed on the pit straight, then a similar fate befell team Pedro Diniz during qualifying. Diniz had experienced another such failure during pre-season testing at 290kph.

It wasn’t all plain sailing for the other teams as a badly disrupted qualifying session set the grid. Heavy winds dislodged part of the start gantry, causing three stoppages during the session. The FIA later fined the organisers $100,000.

It didn’t prevent another all-McLaren front row lock out – indeed, it may have aided it, as both Marlboro-sponsored Ferraris were forced to abort qualifying attempts due to falling boards advertising the same brand of cigarettes.

Schumacher therefore had to settle for third, but once more his ultimate qualifying pace was slightly disguised – this time by him being forced into the spare car after an ‘off’ in his second run. Alongside him was team-mate Barrichello.

Row three was covered by Benetton’s Giancarlo Fisichella and Eddie Irvine in the Jaguar. Of the rest it was Jean Alesi in 15th who had the most adventures, his Prost collecting part of a hoarding which came loose in the winds, and may not have disrupted his car’s doubtful aerodynamics too badly.

Warm weather greeted the 72,000 fans on race day, with those opposite the grid having an extra opportunity to examine Wurz’s Benetton after he stalled on the grid, relegating him to pit lane start.

At the start Hakkinen led away, while a slower starting Coulthard was jumped by Schumacher, who challenged the other McLaren unsuccessfully for the lead. Slotting into fourth was Barrichello from Irvine and Fisichella.

As lap two began Schumacher’s Ferrari found a way past Hakkinen into the Senna S while Barrichello made the same move on Coulthard, only to slither off and relinquish the place. Unfortunately for Coulthard his difficult start to the season continued as he lost the use of the lowest three gears, enabling Barrichello to move past and pull clear.

At the front of the field Schumacher pulled clear of Hakkinen at the rate of one second a lap, while behind them Wurz and the both Prost duo of Alesi and Nick Heidfeld retired with mechanical problems.

At the start of lap 15 it was Barrichello’s turn to pass Hakkinen as pit stop strategies began to unfold. Ferrari looked set to run a two-stop race, with just a single stop for the McLarens. Irvine recognising the entertainment limitations of refuelling strategies livened things up by crashing out on lap 21, although more meaningfully for the race Ferrari’s hopes of another one-two ended when hydraulic problems claimed Barrichello.

Hakkinen initially made good use of his one-stop approach, building up a 12 second lead over Schumacher, who had already pitted. Unfortunately for McLaren disaster struck again with an engine oil pressure problem stopping the McLaren – even prompting the ever-chipper Ron Dennis to look slightly downcast.

Hakkinen’s departure deprived the race of a fight at the front as by the time of his second stop Schumacher had a 48-second lead over Coulthard, allowing him to complete his pit stop and retain the lead. A late oil pressure for the Ferrari driver allowed Coulthard to close the gap, and he eventually took the flag just over four seconds adrift at the finish.

For the other four points-paying positions the one-stop strategy worked well. Fisichella came in third ahead of Frentzen, Trulli and the Williams pair of Schumacher (Ralf) and Button, who moved clear of Verstappen late on.

So, Schumacher took the flag from Coulthard and Fisichella, racking up his second victory of the season and developing a decent points advantage following Hakkinen’s double retirement. And that margin was soon to become even larger.

While the race lacked drama, post-race scrutineering was a different matter. First the planks (the wood under the car, not the drivers) for all the top six finishers except Fisichella were found to be excessively worn.

Needless to say everyone else appealed on the basis that the track surface was bumpier than most motocross courses. After three-and-a-half hours of deliberations they were reinstated – but that wasn’t the end of the acrimony.

The front wing end-plate on Coulthard’s McLaren was found to be too lower by seven millimetres. On this charge the stewards rejected McLaren’s defence that the infringement was caused by the bumps, and eight days after the race an FIA appeal court upheld their view.

Coulthard therefore lost second place to Fisichella, delivering a fine result for Benetton in their first race since Flavio Briatore returned to the helm of the team. The reinstatement of Briatore, who guided the team to their mid-nineties title successes, came as Renault made its second of three returns to the sport, this time as a full factory squad.

This meant Schumacher had a maximum points haul from the first two races with both McLaren drivers still on nul points. Heading to the first of Ferrari’s home races at Imola he held a 12-point lead over Fisichella’s Benetton, with Barrichello in third.

It also made for a peculiar coincidence. Exactly five years earlier Schumacher and Coulthard had placed first and second, driving for Benetton and Williams respectively. Both were initially disqualified for fuel irregularities, then reinstated.

Among the benefactors from Coulthard’s disqualification on this occasion was Button. On arriving at the airport after the race the rookie driver learned his late race pass on Verstappen had in fact bagged him sixth place and the final point – the first for the driver who would clinch the world championship at the track nine years later.