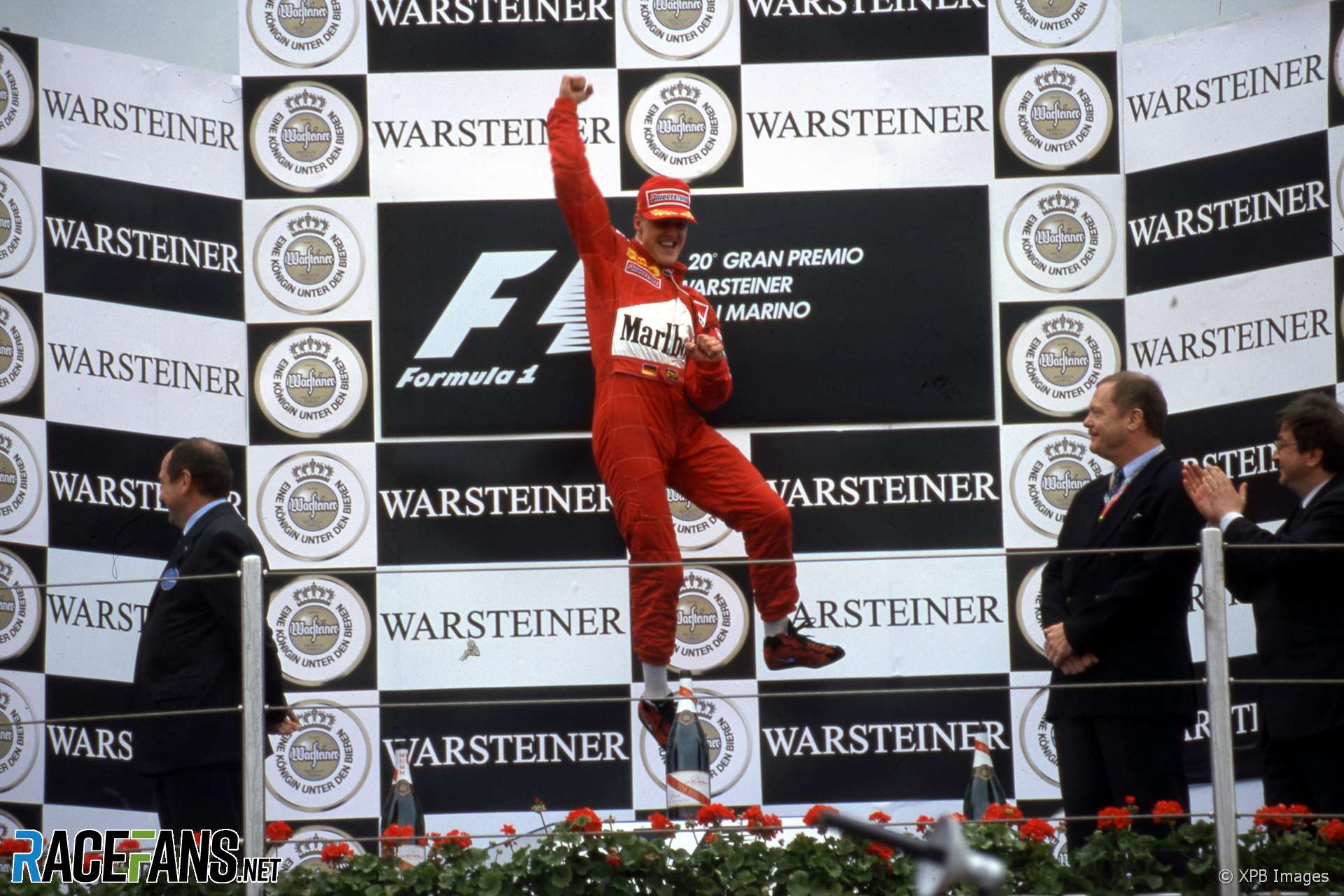 The scoreline after the first two races of 2000 read Schumacher 20, Hakkinen nil. The championship then returned to Europe for the meat of the season, with McLaren anxious to score their first point.

Of the upcoming 12 races, 11 would take place in continental Europe. At this point Azerbaijan wasn’t even in the Eurovision Song Contest.

The European tour traditionally started with the San Marino Grand Prix. This was held at Imola in Italy because San Marino is (a) tiny, and (b) bereft of international-standard racing circuits.

The popular Imola track was holding its fifth race since being substantially revised following the tragedies of 1994. By the standards of the time the circuit felt slightly neutered, though looking back on its 20 years later its high speeds and cramped confines contrast sharply with many current tracks.

McLaren’s failure to get on the score board over the first two races was even beginning to dent McLaren team principal Ron Dennis’s CBeebies-presenter levels of chirpiness. Notwithstanding mechanical woes, the McLaren still seemed to be the car to beat, particularly on single lap pace.

This was proved once again in qualifying where Hakkinen snatching pole position in superb fashion, despite a couple of small errors on his fastest lap. Michael Schumacher shared the front row, just 0.091s adrift.

Their team mates lined up next, David Coulthard a couple of tenths clear of Barrichello. Ralf Schumacher put his Williams fifth but rookie team mate Jenson Button struggled over Imola’s distinctive kerbs and was 18th.

Having resolved the wing failures which forced them to withdraw from Brazil, Sauber were in much better shape at Imola, and Pedro Diniz impressively qualified 10th. Benetton, however, were struggling. Giancarlo Fisichella, who arrived at his first of two home races second in the championship, was barely clear of the Minardis in 19th, eight places behind team mate Alexander Wurz.

Hakkinen got away cleanly from pole position but Schumacher bogged down with “massive wheelspin”. Anxious to keep Coulthard behind, the Ferrari driver carved up his rival, delaying the McLaren as they turned through Tamburello for the first time. That allowed Barrichello to pass the McLaren.

Behind them Jacques Villeneuve made a superb start, taking four cars off the line to slot in fifth ahead of Jarno Trulli’s Jordan.

The early shuffling allowed Hakkinen and Schumacher to get a jump on the field, and crucially for this first time this season the McLaren was set to go the distance. However, in this era of fuel strategies it wasn’t just on-track pace that would make the difference. The first phase of the race saw Hakkinen easing away from Schumacher, with Barrichello in third from Coulthard.

McLaren’s attempt to free Coulthard from behind Barrichello by pitting him early did not pay off – the Ferrari driver kept hold of third place. Meanwhile a longer pit stop for Schumacher allowed Hakkinen to build a lead of almost six seconds by the time the first round of stops had completed.

The McLaren continued to pull clear of the Ferrari, but an electronics glitch cost Hakkinen a couple of seconds. At roughly the same time Schumacher had a scare whilst trying to lap Diniz who tried a bit too hard to get out of the way.

The second round of pit stops that proved crucial. Despite Hakkinen at one point having an over five second lead over Schumacher, the McLaren’s mid-race stint was short, allowing the Ferrari an additional four laps at low fuel pace. This, plus slick work from the Ferrari mechanics, was enough for Schumacher to emerge in the lead for the final phase of the race. McLaren fared better with their second stop for Coulthard, which finally got him ahead of Barrichello.

In the closing stages Hakkinen was able to close up on Schumacher, but with it being a treasonable offence in Italy to pass a Ferrari for the lead of the race, he had to settle for second.

Behind the leading quarter the race was one of attrition. Frentzen fell by the wayside with Jordan’s increasingly familiar gearbox problems, and a loss of fuel pressure sidelined Ralf Schumacher’s Williams.

Eddie Irvine lost out on a points finish after accidentally engaging his speed limiter button. There was a great battle for the remaining points, Villenueve benefitting from his flying start to finish fifth despite a spirited effort from a charging Salo.

Both Prosts retired early on again: The team looked increasingly set to bank significant savings by booking Heidfeld and Alesi to mid-afternoon flights home for the remainder of the season. It didn’t get much better for the Benettons on race day with Wurz and Fisichella finishing ninth and 11th respectively.

As a result three races into the season Schumacher was still on a maximum haul of 30 points, whilst reigning champion Hakkinen had just six points for efforts, despite stellar qualifying pace.

However McLaren had finally proved they had reliability to go with their speed. Was a little more strategic sharpness all they needed to start winning? Dennis maintained the race hadn’t been lost in the pits, but on the track, when Hakkinen suffered his power loss, and a broken floor cost him more time.

At least the battle was now joined between the two drivers who were expected to fight for the title. But the championship was about to take an unexpected turn at Silverstone – in April. What could possibly go wrong?