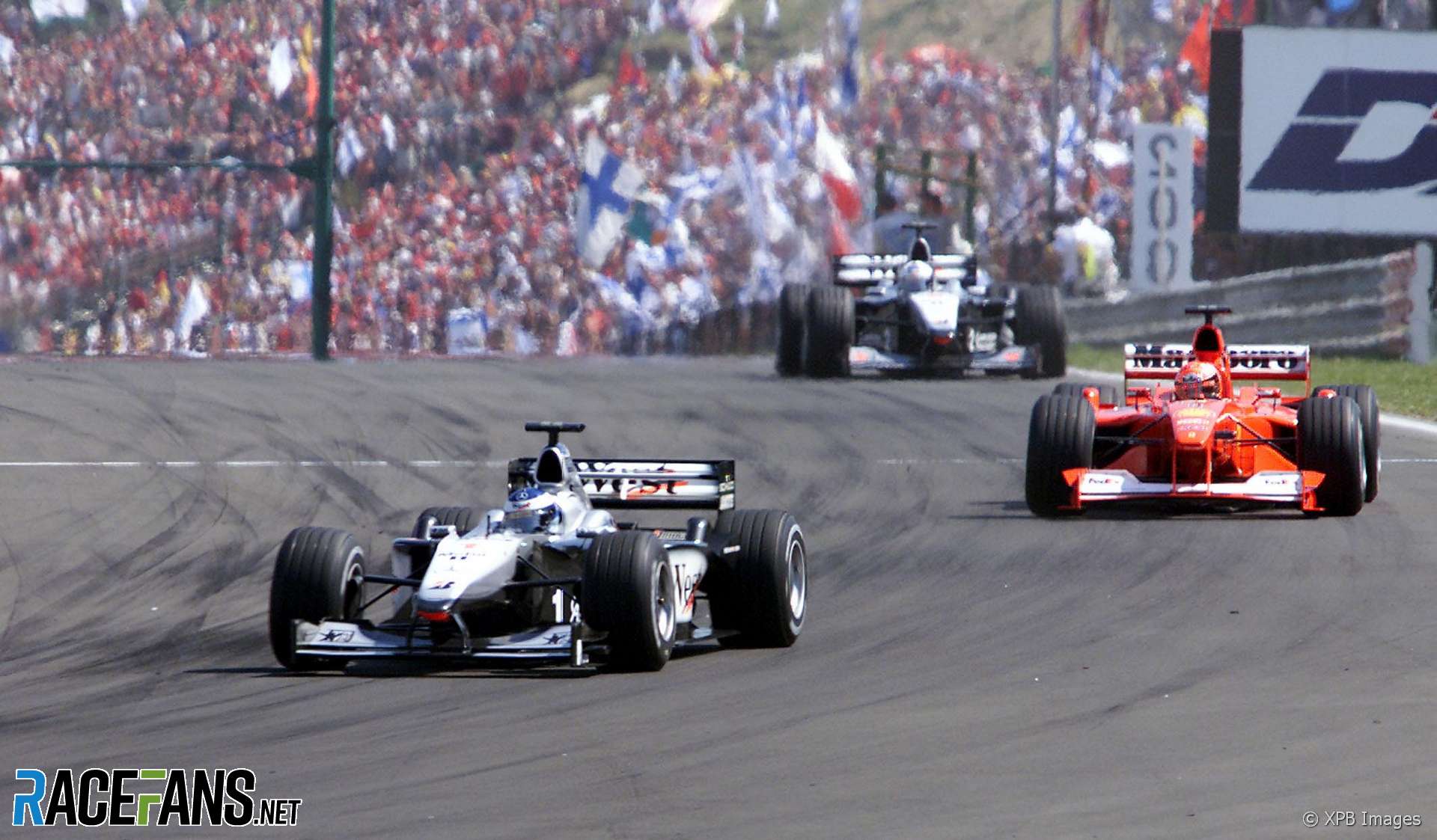 Following his mechanical failure in France and first lap retirements in both Austria and Germany, Michael Schumacher arrived at the Hungaroring desperately needing to finish ahead of Mika Hakkinen and David Coulthard’s McLarens to rebuild his championship lead.

The track just outside Budapest which first hosted the world championship in 1986, had played host to some memorable races and passing moves over the years. Which is to say, the high points were easy to recall among a slew of torpid Hungaroring races.

The 2000 version of the Hungaroring was tighter and twistier than today, lacking the elongated front straight which went some way towards making overtaking possible. Qualifying well, and dodging traffic, was therefore or paramount importance.

Several teams did pre-races testing at the similarly twisty Valencia circuit, where Alexander Wurz was the only casualty after he was struck by a wishbone in an accident, requiring hospital treatment. Jean Alesi’s participation was in doubt as he recovered from his heavy Hockenheim shunt two weeks earlier.

Out to prove a point, Schumacher was fastest overall in practice at a circuit which always seemed to extract the best from him. His Ferrari team mate Rubens Barrichello, fresh from his breakthrough victory in Germany, was also on the pace. The McLarens were up in contention as usual, Coulthard and Hakkinen vying to emerge as the top threat to Schumacher.

Qualifying was held in hot and dry conditions, and Schumacher continued his free practice form, taking the 28th pole position of his career.

The McLarens were next: Coulthard three tenths of a second off the Ferrari, Hakkinen third but pleased with his car’s balance having made a number of positive set-up changes following a frustrating two days of practice.

Beyond the top two teams the upper midfield remained competitive with Heinz-Harald Frentzen sixth for Jordan, clear of the Benetton of Giancarlo Fisichella, then Jenson Button in the second Williams.

Arrows had a poor session with Pedro de la Rosa and Jos Verstappen 15th and 20th respectively. The latter had only the Minardis behind him, having beaten Marc Gene by a slim four-hundredths of a second.

Changeable weather characterised much of the 2000 season, but the sun continued to blaze on race day. Once again the start brought a surprise, though it was quite different to that of the previous two rounds.

When the lights changed Hakkinen, from third on the grid, made a lightning start and shot past the stunned front row occupants into turn one, pursued by Schumacher and Coulthard.

Coulthard had to fend off Ralf Schumacher for third, which he did. Further back Jacques Villeneuve and de la Rosa collided, forcing the BAR pilot into the pits for a new nose.

In the early stages Hakkinen began to pull clear of Schumacher, setting a series of fastest laps. Fisichella spun away his chances, elevating Irvine to seventh. Also in trouble early on was Alesi who pitted, but rejoined, before eventually heading into the garage due to steering problems. Prost’s bad day was compounded when Nick Heidfeld stalled and couldn’t restart the car during his first scheduled pit stop, becoming the second retirement.

Attrition in the field served to (partially) distract from the procession at the front. Hakkinen continued to pull away from Schumacher with ease, whilst the Ferrari was able to open up a three second advantage from Coulthard.

Pit stops for fresh tyres and more fuel did nothing to jumble the order of the top three. But once back on track Hakkinen was flying once more, setting the fastest lap of the race on the 33rd tour, and establishing a 20-second lead over Schumacher by the second round of pit stops.

The Ferrari pilot was arguably more concerned by events behind him, as Coulthard took advantage of his fresh tyres to close the gap down once more. Aerodynamic turbulence, however, proved the usual impediment to progress at the Hungaroring.

Coulthard’s charge was slowed as he was held up by Gene which, under the somewhat binary penalty regime of the time, earned the Minardi driver the swingeing sanction of a stop-go time penalty.

The second round of pit stops once more proceeded without drama. The only change of position among the points-paying places in the entire race occured when Barrichello’s strategy got him ahead of Ralf Schumacher for fourth. They followed the podium trio home, with Frentzen taking the final point.

Other retirements came from Diniz and Mazzacane, both with engine failure (insert usual joke about the cars being surprisingly fast enough to exert that kind of strain on their machinery). Button, who’d started his final stint in seventh, faded and was passed by Trulli and Irvine.

A soporific race therefore produced a vital development in the championship. Hakkinen’s third victory of the season moved him ahead of Michael Schumacher at the top of the standings. At least the Ferrari driver could console himself with his first points score in four races.

With Coulthard a further four points behind Schumacher, and five races left including one new venue, the stage was set for a thrilling end to the season. The next stop a fortnight later would be Spa, always a highlight of the championship, which this time would produce one of the most thrilling races of the decade.