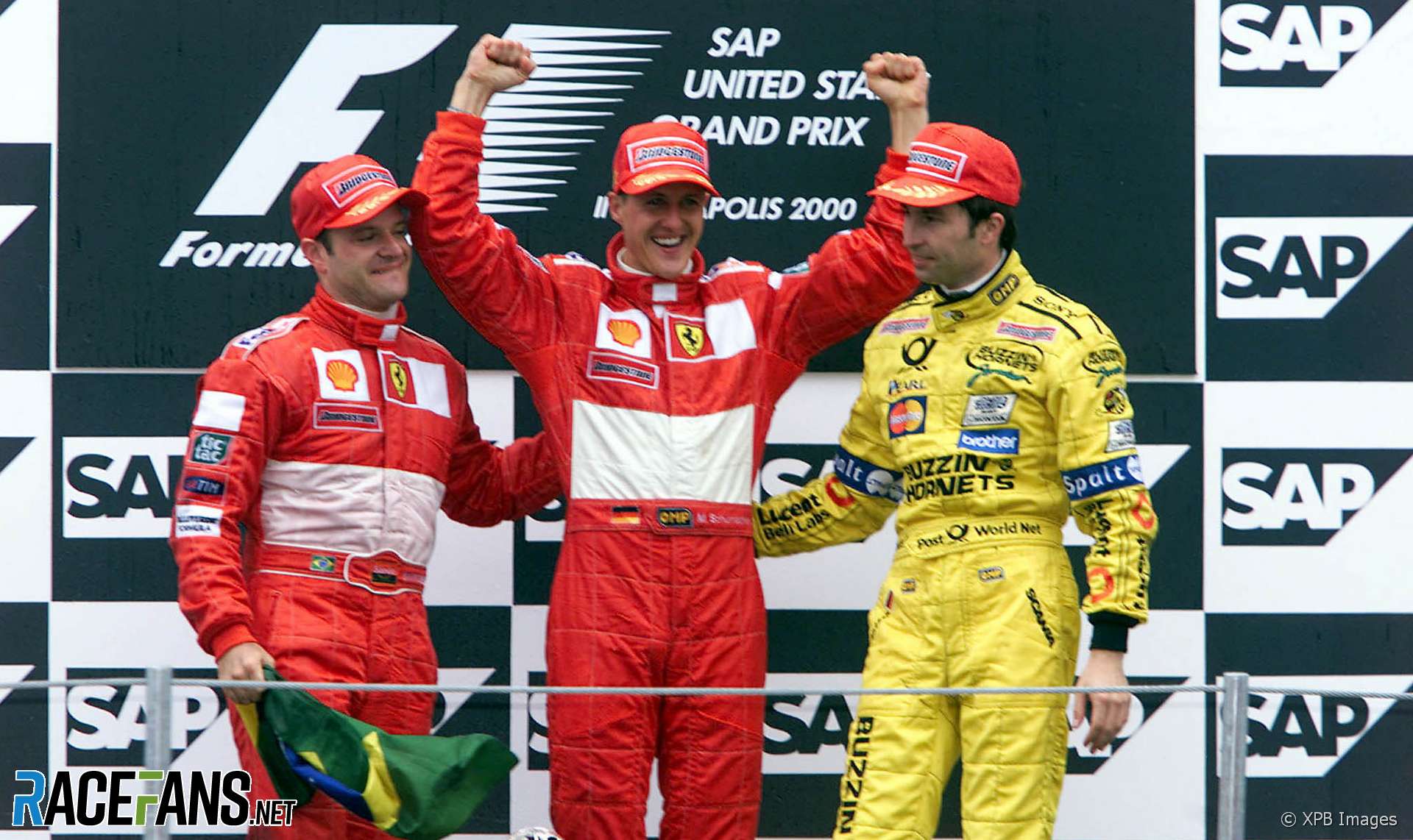 With three races of the season to run the 2000 F1 title fight looked certain to be settled at the final race.

McLaren’s Mika Hakkinen led Michael Schumacher by just two points, the Ferrari driver having hit back against the reigning champion with a vital win at Monza. Hakkinen’s team mate David Coulthard was mathematically in the mix, but 19 points adrift and badly in need of a big result.

Both Hakkinen and Schumacher had enjoyed dominant spells through the year but had also left a lot of points out on the table – Hakkinen through early season technical failures, Schumacher with back-to-back first-lap crashes in Austria and Germany.

For the antepenultimate round of the championship, Formula 1 was making its return to the United States. Following a nine-year absence, and with fading memories of little-loved venues such as the streets of Phoenix, the US grand prix returned to the schedule like a something from the flames (I forget the analogy).

F1 had certainly chosen well in terms of venue: the mighty Indianapolis Motor Speedway, home to IndyCar’s signature 500-mile race. But spurning the formidable speeds of the oval, F1 instead chose to race on a new, twisty and technical road course – ‘technical’ being, as ever, the favoured euphemism for ‘tediously slow’.

Running through the infield of the grown-up track, large enough contain a golf course within its perimeter, many observers asked not unreasonably whether a toddler with a crayon might have devised a better layout, particularly with respect to the track’s hideously slow pair of hairpins, the presence of which would have disgraced an indoor go-karting track.

At least F1 was back in the US, and by racing at Indianapolis there was surely nothing that could possibly go wrong now, or in the future, to negatively affect the sport’s reputation.

Although a new track, free practice went the way of the established ordered with McLaren setting the pace on Friday, and Ferrari taking over at the top of the times on Saturday. The second day of running was punctuated by changeable weather which seemed to suit the Ferrari’s better. Also showing brightly was Jenson Button in the Williams and Heinz-Harald Frentzen for Jordan.

Qualifying was held in cloudy conditions, with the odd shower threatening to disrupt proceedings and give the locals the unfamiliar sight of single-seaters tackling a wet track.

Schumacher prevailed, taking his seventh pole position of the season, seemingly still on a roll from Monza. A close session saw Coulthard qualifying second just over a tenth behind, and the second McLaren of Hakkinen a further 0.03s back. Rubens Barrichello put his Ferrari fourth ahead of Jarno Trulli and the ever-improving Jenson Button.

The starting grid was moved back eight metres to prevent the front row occupants suffering wheelspin as they crossed the famous yard of bricks. However pre-race rain meant all the drivers would have to contend with reduced grip levels: Everyone bar Johnny Herbert in his Jaguar took the start on intermediate tyres.

A throttle-happy Coulthard jumped the start, taking the lead but earning himself a 10-second stop-go penalty. Barrichello made a good start, pressuring Hakkinen, but the McLaren held on to third. Trulli and Button kept their places inside the points-scoring top six initially, but halfway around the second lap the pair collided, forcing a pit-stop apiece.

Jacques Villeneuve was thus elevated to fifth and shortly after Frentzen moved ahead of Ralf Schumacher to sixth. Verstappen was also on the move claiming a coupe of places as he climbed to tenth.

By this point the track was drying sufficiently to initiate a round of pit stops back to dry tyres. Everyone bar race leader Michael Schumacher, Frentzen, Diniz and Mazzacane had made the switch by lap nine. Post-pit stops there was frenetic action, including the peculiar sight of Mazzacane in his Minardi vigorously defending from Hakkinen, costing the McLaren driver time.

This proved important once Schumacher pitted from the lead on lap 16 and emerged with a 10 second lead over Hakkinen. But the McLaren driver immediately started to whittle down Schumacher’s advantage, taking six seconds out of his rival over the course of seven laps.

For a while a repeat of the thrilling Spa showdown between the pair seemed to be in the offing. Then came a pivotal moment in the championship fight: Hakkinen’s McLaren suffered a Mercedes engine failure, forcing him into retirement, and virtually guaranteeing Schumacher a healthy points lead at the end of the day.

Behind, having served his penalty, Coulthard was looking to make amends, steadily moving up through the field but facing a long afternoon if he wanted a points finish. For Ferrari the McLaren maladies was good news with Schumacher and Barrichello flying in formation at the front of the field.

The window for the round of scheduled stops was broadly between laps 40 and 50. By this point Salo, Verstappen, de la Rosa and Fisichella had all fallen by the wayside. The main drama of the pit stop cycle came when Mazzacane missed his box, colliding with an unfortunate Minardi mechanic.

The running order settled down from that point on, with Schumacher comfortably clear of Barrichello and Frentzen rounding out the podium places, with the remainder of the points being filled by Villeneuve, Coulthard and Diniz.

There was some late action as Villeneuve tried unsuccessfully to wrestle third from Frentzen. Schumacher, leading on his own with no pressure from behind, inexplicably spun, but rejoined without drama. Barrichello followed him home, with Frentzen, Villeneuve, Coulthard and Diniz taking the remaining points places.

Schumacher’s seventh win of the season put him back in the championship lead. With Hakkinen failing to score, and just two races remaining, he suddenly held the upper hand, and had the chance to clinch the championship at Suzuka.