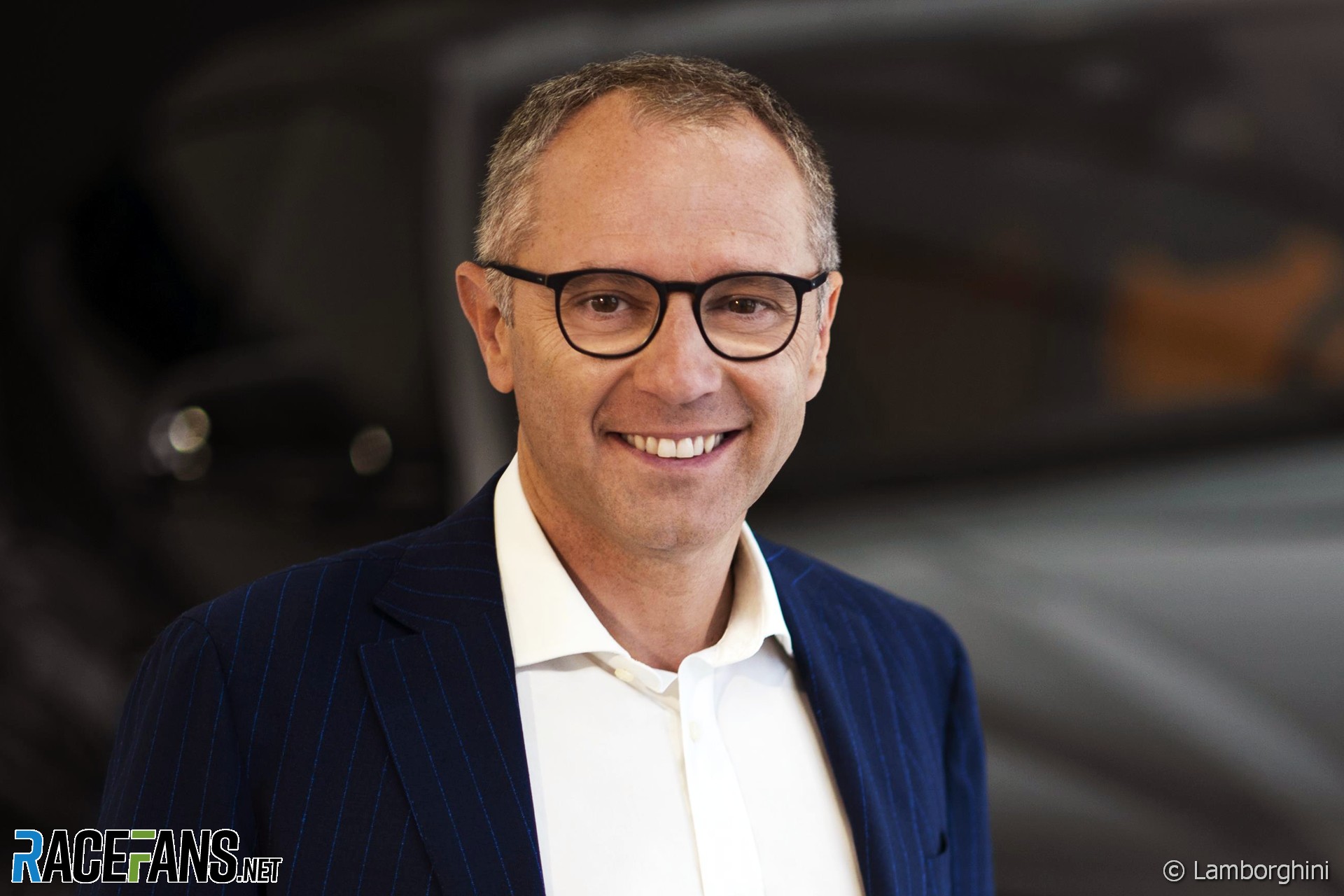 Yesterday the sport confirmed the change will take place in January next year. It’s a seismic development, but an analysis of the appointment shows it is an entirely logical move.

Carey will remain in F1 as non-executive chairman, but is expected to be based in New York, where his Wall Street experience will prove crucial. He will continue in an outward-facing role, with Domenicali leading the nuts and bolts aspects of the business, including the 2021-22 rules transition.

Born in Imola to a banking family, 55-year-old Domenicali is well-connected throughout F1. Wife Silvia, mother to their two children, is the daughter of Italy’s foremost F1 photographer Ercole Colombo. Domenicali worked his way up to his present role as Lamborghini CEO from hobby work at his local track, into circuit management at Mugello and executive positions within Ferrari, which he helmed during the Scuderia’s most recent title success in 2008.

Along the way Domenicali graduated in business science, amassed experience in administration, finance and human resources; oversaw Ferrari’s sponsorship portfolios; held responsibility for Maranello’s sporting and logistics departments during an era when testing was free and major teams moved with up to 300 heads; then led Ferrari as team principal for six years until April 2014.

He then left the team over a matter of principle. The circumstances of Domenicali’s exit speak volumes about his character. Instructed by Ferrari president Luca di Montezemolo to fire key engine department personnel after the team’s disappointing start to the V6 hybrid turbo era, Domenicali refused point blank, sacrificing his own career. He’d been there before and carried out the order – against his long-standing mate, technical director Aldo Costa, in 2011 – and sworn “never again”.

Audi soon came knocking, appointing Domenicali as vice president for new business projects – a euphemism for feasibility studies into an F1 entry. The project came agonisingly close to fruition. Sources are adamant Audi was within a week of committing to an F1 engine operation and acquiring Red Bull Racing – with the drinks company continuing as title sponsor – before the Dieselgate scandal engulfed the entire Volkswagen Group.

With the F1 project scrapped, VW boss Ferdinand Pïech could have cut Domenicali loose, yet chose to shift Lamborghini CEO Stephan Winkelmann to Bugatti and install the Italian in Sant’Agata Bolognese. During his five-year tenure there Domenicali not only doubled unit sales and introduced the successful Urus SUV range, but found time to head up the FIA single seater commission, charged with (successfully) streamlining the route to F1.

In short, in his thus-far 30-year career Domenicali has done it all with distinction, achieved in his hallmark quiet but steely style, yet remained a totally grounded individual in the process. In my over 20 years in the viper pit called the F1 paddock I’ve not heard a bad word said about Stefano Domenicali, not least by his direct competitors. Comments from team bosses during the Sochi Friday press conference were all positive.

The word in Maranello is that Ferrari recently attempted to lure him back, this time as replacement for CEO Louis C Camilleri, reporting directly to chairman John Elkann. Domenicali gave the offer short shrift – if they didn’t value him last time, why would they genuinely do so again in times of crisis? This should silence those who falsely (and unfairly) jumped to the conclusion he remains a Tifoso to the core.

Indeed, his appointment was brokered not by Ferrari as variously mooted, but by ex-Audi colleague Luca de Meo, now in charge at Renault. The fellow Italians grew close during spells at Fiat/Ferrari and Audi – de Meo was CEO of Seat and thus sat at board tables with Domenicali – and when the former switched to Renault in July amongst his first sporting tasks was renaming the team “Alpine” and committing it to the 2021-25 Concorde Agreement.

De Meo grew twitchy about the lack of clear succession planning under Liberty. Simultaneously Domenicali heard rumours that Lamborghini and Bugatti were to be offloaded as part of VW’s electrification drive, and did not hear the coherent denials he sought from management. De Meo therefore proposed Domenicali to F1’s board.

Domenicali now faces the biggest challenge of his professional life: Leading the pinnacle of motorsport into a new era on behalf of a NASDAQ-listed company whose primary metric is share price. Of course, fans are valued – as customers; of course, teams are necessary – as suppliers; of course, circuits and broadcasters are valued – as shop windows. Crucially, though, Domenicali has been a member of all three groups at some stage.

He joins F1 at a time when it is largely a case of ‘mission accomplished’ for Carey: All 10 teams have signed up to the 2021-25 Concorde Agreement, the $145 million budget cap is not only in place but reduced from its original $175m level, revised sporting and technical regulations are inked, and amid the Covid-19 crisis F1 has salvaged 17 races from 22 – considerably more than Carey’s critics expected in May.

However, the finances of both Liberty and the teams desperately need stabilising. The imperative will be to extend (or replace) circuit and TV contracts at optimum levels all while growing live and lounge audiences and calmly keeping investors sweet, in tandem with Carey.

F1’s over-the-top streaming service remains a work-in-progress, and Domenicali faces some hard decisions in this regard. According to insiders, he insisted on total executive freedom and authority in the role, with get-out clauses should that not eventuate. Imagine the havoc an unexpected departure would wreak on share prices, so there are no doubts he received such assurances.

Expect changes once his feet are comfortably under the table, and not only with regard to OTT, but across the company. Massive investments have been made by Liberty in all areas, and Domenicali will surely examine these critically through experienced eyes, then move to make rapid and effective changes where necessary. His record at Lamborghini suggests he is not someone to insist on change for change’s sake.

All this begs the questions: Where to for Ross Brawn, and why did his once junior Ferrari colleague get the nod over him? Effectively the same ‘mission accomplished’ accolade applies to Brawn, who guided the US executives through rocky waters after Liberty acquired the rights, and put in place many changes that are slated for 2022. A lot of his plans did not come to pass, and possibly he lifted his foot off the gas recently.

That said, he is 66 next month, wealthy beyond his wildest dreams after selling his eponymous team, has grandchildren and achieved far more in his career than he would have thought possible when starting out as an apprentice instrument technician in 1971. Smart money says he will hand over, then step back in a transitional consulting role. After almost 50 years in the business he deserves to return to his hobby, fishing.

Brawn’s departure is likely to trigger a wholesale shift of F1’s technical department – effectively a consultancy to the FIA, which accepts or rejects recommendations – to the FIA. Once again, it’s a matter of task completed, for the 2022 regulations are in place, so retaining the department in London makes little economic sense. Current specialists are likely to be seconded to Paris on a consultancy basis.

Dealing with the other F1 CEO hopefuls Toto Wolff and Christian Horner will require all Domenicali’s diplomatic skills, for both are likely to be bitterly disappointed that he, not they, got the sport’s top job. The latter had worked with Domenicali for many years both at Red Bull and during the team purchase studies; whereas Wolff and Mercedes are crucial but largely unknown quantities to him.

Equally, Domenicali needs to maintain solid relations with the current FIA leadership – presided over by his former Ferrari mentor, Jean Todt – while preparing for a regime change at the end of 2021. A number of names are in the frame for the role as FIA president. Needless to say, a constructive relationship between governing body and commercial rights holder is absolutely crucial to the long-term health of F1.

In that longer term, F1 faces existential challenges driven by both environmental and sustainability issues, just as does the supercar business Domenicali is leaving. Last year he launched the Sián, Lamborghini’s first hybrid, and one of his overriding objectives will surely be to ensure F1 has a sustainable future in the face of mass electrification. That is likely to pose his biggest long-term challenge.

Another challenge will be to maintain the current constellation of teams and engine suppliers – or, ideally, increase their number – for the sport requires a healthy roster of competitors. While checks and balances are in place for the immediate future, the current engine regulations expire in 2025, and a power unit formula which caters for greener fuels and lower emissions will be crucial to F1’s future. Those five years will be gone in a flash.

A long and complex to-do list awaits Stefano Domenicali, then. But he is equipped and suited to the role of F1 president and CEO like few others.

CVs list only accomplishments and tend to gloss over intangibles. Yet these are probably the biggest assets Domenicali brings to F1: unbridled passion for the sport, combined with a clear, calm business head and genuine humility. There is, frankly, no one better equipped to lead F1 into its next 70 years.