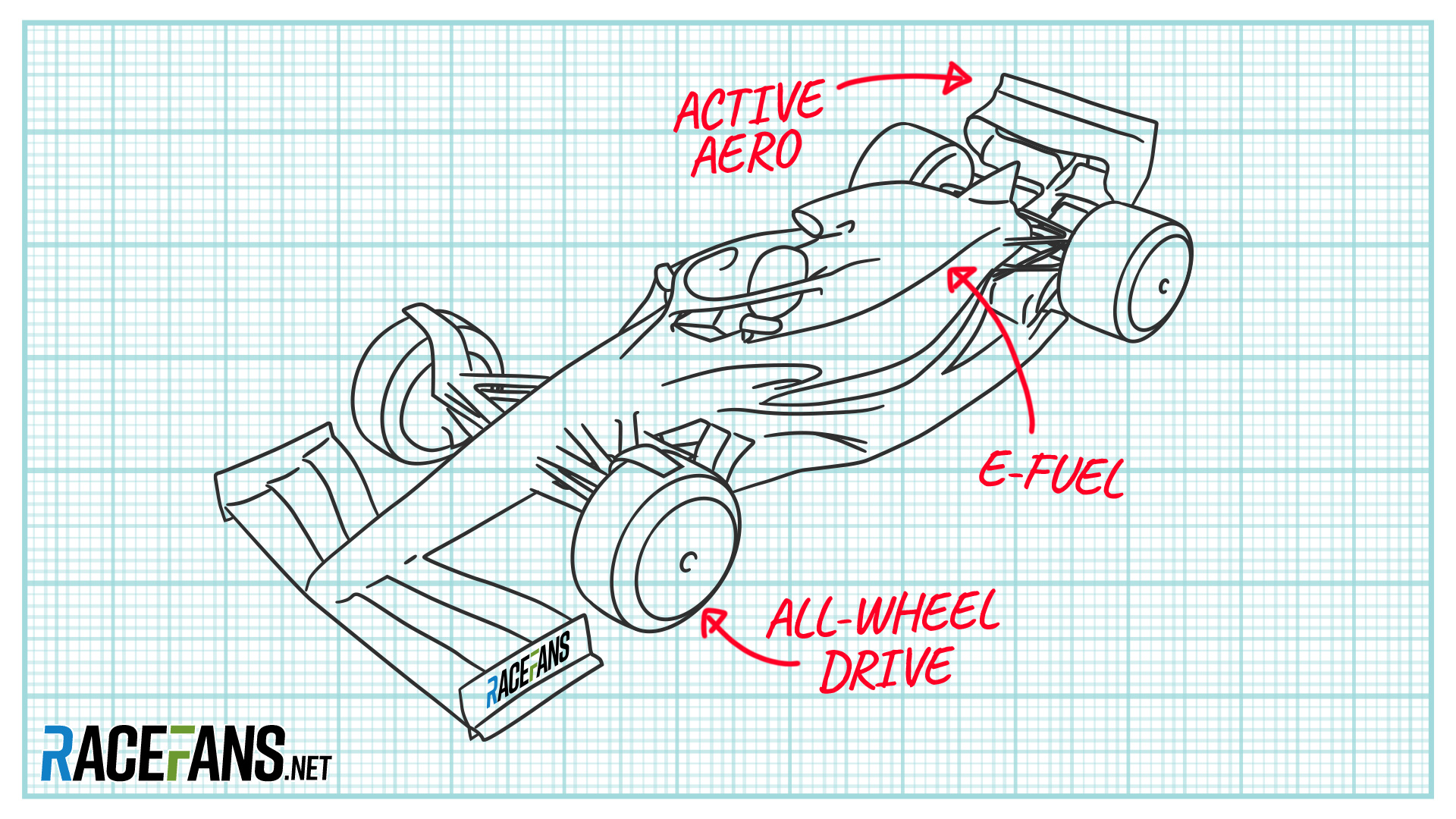 In July last year, as Formula 1 started its postponed 2021 season, we suggested the sport could prove to be the internal combustion engine’s saviour by mandating synthetic and/or biofuels. These could in turn be ‘dropped’ into the billions of such engines currently in use worldwide – on the road, in the air, on water or industrially – thereby prolonging their working lives without adding significantly (if at all) to global CO2 levels.

“On that basis F1 does not need a new engine formula in 2025,” we concluded, “it simply needs a new fuel formula.”

F1’s ‘new era’ regulations – which made provisions for increasing levels of non-fossil fuels – were originally intended to span the five years from 2021-25. These specify a 5.75% biofuel component, with a 10% ethanol element prevailing from 2022.

Then came Covid, which in turn delayed much of what was planned by a year to 2022 on cost and uncertainty grounds. Meanwhile the world increasingly embraced electrification, which shone uncomfortable spotlights on IC engines.

“By developing sustainable fuels made from biowaste that can power Formula 1, we are taking a new step forward,” said FIA president Jean Todt at the time. “With the support of the world’s leading energy companies, we can combine the best technological and environmental performance.”

His comments were echoed by F1 managing director Ross Brawn. “Formula 1 has long served as platform for introducing next generation advancements in the automotive world,” he said. “Our top sustainability priority now is building a roadmap for hybrid engines that reduce emissions and offer real-world benefits in road cars.”

However Pat Symonds, F1’s chief technical officer and thus the man charged by Liberty with ensuring it has the right technologies to deliver a sustainable, world-class spectacle, says the early concoction did not tick all the boxes.

“That fuel didn’t perform as well as we might have hoped,” he told RaceFans. “When I say that, we weren’t expecting the same performance from it because the Formula 1 fuels we have at the moment have been tailored for energy density. So I think there’s still some work to do.

“We initially set ourselves an objective to try and get sustainable fuels by 2023,” he adds, “but the problem of the moment is a supply problem, not just a technical problem. As we couldn’t put sustainable fuel into 2023’s regulations, we said ‘Let’s move the whole project forward to 2025’.”

Thus, in February the F1 Commission meeting voted unanimously to expedite the introduction of a revised engine formula by a year. Five goals were set for these next-generation power units: incorporate relevant and sustainable technologies; be attractive to motor manufacturers; be compatible with sustainable fuels; be “powerful and emotive” albeit at lower costs to attract incoming suppliers; and be carbon neutral.

Crucially, this revised date provides a sufficiently long runway for newcomers while offering exiting suppliers a four-year window to defray costs, with savings accruing through development ‘freezes’ on current units. This window also provides two years to frame the regulations and sufficient cushion to comply with the FIA’s statutory two-year notice for changes which influence the balance of performance between automobiles.

“From the technology side we face a lot of challenges because we need to ensure better efficiency and reduce pollutants,” said Gilles Simon, the FIA’s technical director responsible for engines, in an exclusive interview. “So, we need to evolve.

“We need to switch to sustainable fuels and promote new technologies, but we also have to consider costs. This is an important factor because we want to attract new manufacturers, and to do that we need to keep investment within reasonable limits.”

The internal timeline is for the first power unit concepts to be presented to suppliers by June, with the following six months devoted to evaluation and refining the various proposals ahead of drafting the regulations during 2022, ready for FIA ratification possibly as early as July next year. Thus, suppliers would have over two years to develop their engines, resolve issues and clarify grey areas before introduction in 2025.

Crucially, pulling the regulation changes forward by a year means the changes fall under the current 2021-2025 Concorde Agreement. This means the FIA and F1 combined hold a total of 20 (of 30) votes, provided decisions are taken ahead of that two-year window.

“What we have given ourselves as a target is to have a good idea of the power unit specification by this summer, and a reasonably full definition of the rest of the car during 2022,” Nikolas Tombazis, the FIA’s single-seater technical director, told RaceFans.

“It is our belief that fuel is going to remain at the core of mobility for the foreseeable future and, of course, in its fully sustainable form. The world is going to a more hybrid situation and that should be reflected in Formula 1, which will continue to lead the way in this technology, and we plan to make a big step forward with the next generation power unit.

“Our main objectives for the next generation of Formula 1 cars are to ensure the racing stays exciting whilst making a great step forward in sustainability. We want to go fully carbon neutral, and as a result of that we want to move to fully sustainable fuel.”

Simon projects hybridised units based on architectures largely similar to the current turbocharged 1.6-litre V6 engines, also fitted with heat recovery units. These would be capable of producing around 800kw, derived roughly 50-50 between the internal combustion engine and electrical power, so roughly 400kW per power source. Saudi’s Aramco oil company, which became a major sponsor of the world championship last year, has made its considerable resources available to F1 for sustainable fuels research.

“We could probably maintain similar [15,000] rpm as we have today, so probably noise levels would be similar, or slightly better,” Tombazis believes. This would satisfy the ‘emotive’ requirement – current power units produce 550kw via the ICE, with 120kw provided by hybrid energy stores, so 670kw total.

Already these fuels have a catchy name, ‘e-fuel’, on account being both arguably cleaner overall than battery power, if the pollution created in the production of cells is factored into the equation, and due to the renewable electrical energy, mainly solar, used in the conversion of biomass and synthetics to combustible fuel.

Members of the Formula 1 Fuel Advisory Panel – comprising all major oil companies, not only existing team partners – are eagerly formulating brews that can be ‘dropped into’ existing engines with little or no modification. Such fuels are, of course, in the best interests of oil companies given the number of fossil-fuelled cars currently roaming the planet, which cannot be scrapped overnight.

“We will take advantage of the fact that we’re blending some pretty pure chemicals together. ‘Drop-in’ fuel will be a nice clean fuel,” explains Symonds. “The idea of these synthetic fuels is that they will be low CO2 [or even] CO2 neutral.

“But we also want to tackle the emissions problem. What we’re looking at for 2025 is to bring in for the first time some emission regulations into Formula 1, and we’ll be looking at particulates; particularly the oxides in nitrogen.”

Will that entail completely new chassis designs to complement the super-frugal powertrains and increased hybrid energy density? Indeed, does this not point to all-wheel kinetic energy recovery to double harvesting, in turn opening the door to a form of all-wheel-drive?

“Obviously, a four-wheel drive car is very efficient in terms of recovery, in terms of performance, in terms of cornering. But it’s an added complexity,” says Simon, adding that all options are on the table before stressing that no final decisions have yet been taken. “It is still early in the programme, and we are looking far and wide. Together [with F1 and power unit suppliers] we will define the direction.”

Symonds is of a similar opinion: “If you have energy recovery on the front wheels it makes sense to drive [them]. But we have to remember we’re a sport, and I don’t want cornering on absolute rails. At the beginning of the project our simulations started with front drive, but only using it when lateral acceleration drops to certain levels.” He draws parallels with the WEC, which allows all-wheel-drive only above certain speeds.

All-wheel-drive and recovery chimes with F1’s plans to move away from carbon brakes to carbon ceramic brakes to reduce carbon brake particulates. These would be unlikely to cope with projected rear-wheel energy recovery duty cycles, thus making all-wheel-drive systems inevitable. A spokesperson for Brembo, F1’s primary brake system supplier, confirmed that they are aiming to phase out carbon friction materials.

“Based on Brembo’s strategy and new vision, we are already working on new materials and evolutionary processes in terms of consumption and emissions,” he said. “This is our philosophy, not only because Formula 1 is asking all suppliers to adapt to this new sustainable approach, but because our corporate strategy is to produce materials that are sustainable for the environment. In F1 this process has started.”

According to Symonds active aerodynamics, too, on the table: “You don’t have to be an engineer to realise that one of the reasons we use quite a lot of fuel on these cars is because they’re high drag. So, the first thing you’ve got to do, apart from the fact that you’re moving into much more hybridisation, is get some drag out of it. That leads you to active aerodynamics on the car.”

Whatever direction is finally agreed upon there are no doubts that the world is increasingly embracing electrification, yet battery power is not suitable for all applications. Developing countries require transportation yet seldom have the infrastructure required by electric cars.

“We want to make the cars more efficient in every way, meaning we must keep the costs down at the same time, making it sustainable financially in terms of business models for the teams, whilst at all times keeping racing exciting, and maintaining the passion in the sport,” stresses Tombazis.

“When you lay out all of these objectives there’s no golden ticket solution to satisfy them all easily, so what we are discussing now is where the best compromise is – we’re not excluding any technologies, and equally we have not settled on the specific direction we will go towards.

“We feel now is the right time to be having these constructive discussions between the FIA, F1, the teams, power unit manufacturers and fuel suppliers. By having these discussions now, we’ll be in a much stronger, [more] cohesive position when these regulations are firmed up and the power units and cars begin to be developed for 2025,” concludes Tombazis.

All this points to a seismic shift from the ‘new-era’ planned for 2022-24, which in turn marks a sea-change away from F1’s current formula. Nothing is currently off the table, with a raft of technical innovations under consideration: drop-in e-fuels, all-wheel-drive, active aerodynamics, carbon ceramic brakes and a 50/50 ICE/hybrid split – all aimed at making F1 sustainable and relevant in the face of a rapidly changing world.

63 comments on “Revealed: Radical changes on the drawing board for F1’s next rules revolution in 2025”