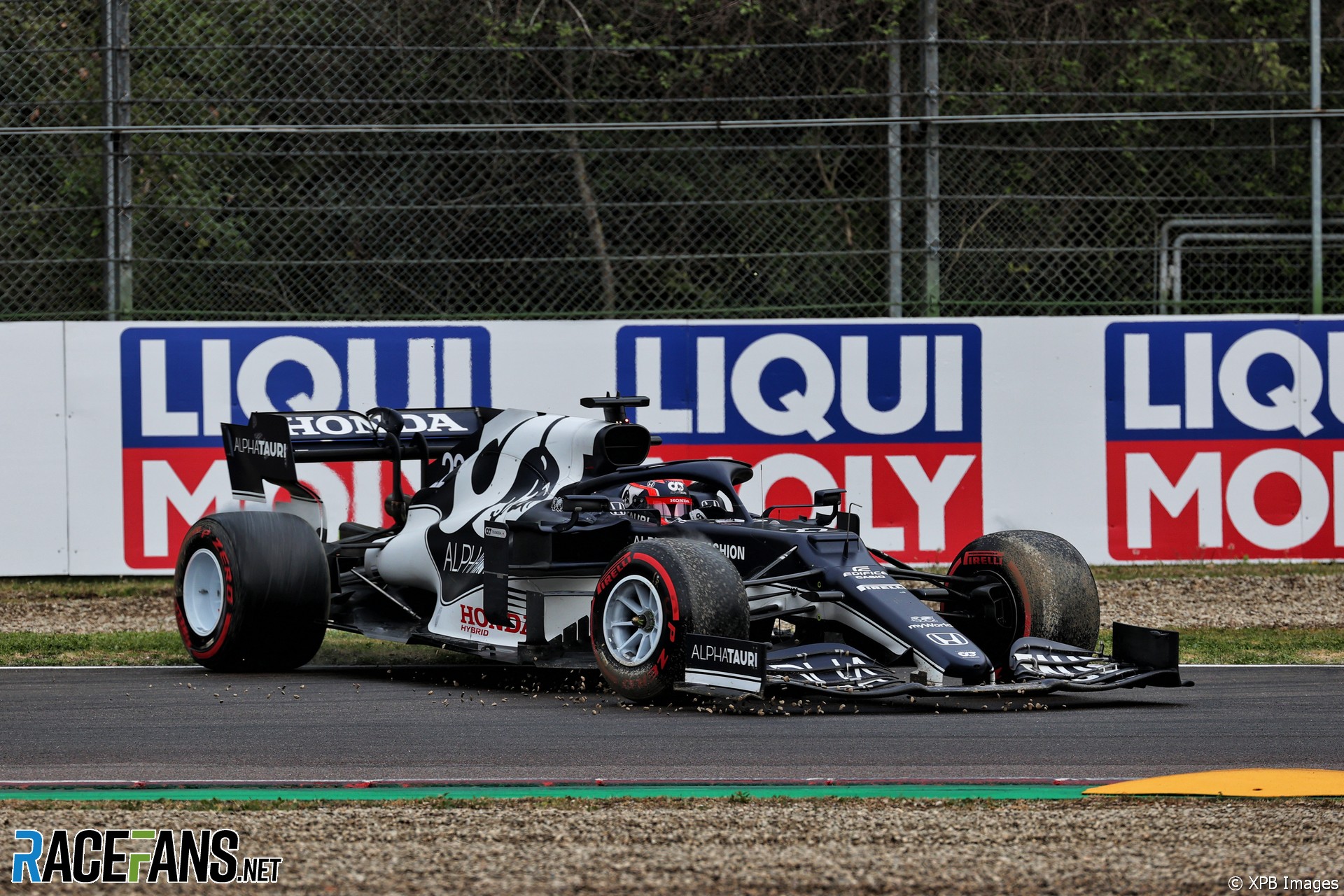 AlphaTauri had the pace in the dry to get a strong result at Imola, and in the wet the team also looked competitive on the intermediate tyre. But their driver Yuki Tsunoda qualified last and finished a distant 12th, outside of the points and with a five-second penalty too for track limits violations.

Tsunoda ripped the rear of his car in Q1 before he had set a recorded lap time, then on a wet track in the grand prix he made strong progress early on to climb from 20th to 13th place but then went off track a few times, often not enough to seriously slow him down and as a result draw the attention of the stewards.

“Doing mistakes two days in a row. For me? Not acceptable. Really not acceptable,” said Tsunoda. “I just learn from it this time, but just improve next time.”

His team mate Pierre Gasly qualified fifth and finished seventh despite starting the race on the wrong tyre compound and plummeting down the order during his first stint, and both his and Tsunoda’s pace made the latter’s mistakes even more frustrating.

“For me, Q1, completely my mistakes,” Tsunoda said. “Even in Q1, like when I see car performance overall this week, I don’t have to push like that much. I don’t know why, I just pushed too much even though I don’t have to.”

The configuration of the Monaco and Valencia Ricardo Tormo circuits that will be used for Formula E’s next three rounds have been revealed by the championship, with the full-length version of Monaco being used for the first time.

Valencia will be the second permanent racing venue to feature in an FE calendar after Mexico City, and the Spanish circuit will use a 3.37 kilometre layout that after the turn eight left-hander (where Attack Mode will be located) cuts right rather than follow the circuit’s grand prix loop. That detour joins into the long continuous radius turn 13 left-hander that goes to the final corner named after the late Adrian Campos. The main straight is then interrupted by a chicane that incorporates the pit lane entry. It’s a different layout to the one used for pre-season testing, and will be raced on for the first time this Saturday.

Monaco has held an EPrix three times before on a shortened track that at Sainte Devote turns sharply right downhill to the Nouvelle chicane, which as a hairpin for FE led back onto the usual circuit. Now it gets to incorporate famous corners such as Mirabeau and the Grand Hotel hairpin as well as of course the tunnel into its races. To avoid comparisons with F1’s lap times at the circuit it will run with small changes though, such as a faster version of Sainte Devote, similar to the corner’s original incarnation. FE visits the city on May 8th, two weeks before F1’s race.

Considering this was me in Lap 1, I wouldn’t have thought I’d end up 6th. Thanks @ecrindy for the great car, she feels good… @IndyCar pic.twitter.com/3udRcocJ8M

THERE HE IS @AlexPalou!!!! Your winner of the @Honda Indy Grand Prix of Alabama presented by @AmFirstFCU #HIGPA | @IndyCar pic.twitter.com/b4lq0bn19u

F1 calendar 2021: How realistic are the Nurburgring rumors? (F1-Insider - German)

Background of the speculation: The travel department of F1 has apparently asked about hotels at the Nurburgring. But, as F1-Insider.com found out from F1 circles: A return to the traditional German track a week after the 24-hour race there in June is not planned. Instead, switching to the Istanbul route is the more likely option.

It had been planned that the series would begin in 2019, but a delay in delivery of parts meant rounds were cancelled, and then a recession meant a 2020 start date was chosen instead. The Covid-19 pandemic then put to its 2020 plans, and it announced it would go racing in 2021 in Brazil and then Uruguay. That was another failed plan, so the series struck a deal to support national touring car series Turismo Pista to finally get action underway.

David Malukas bounced back from a disappointing start to his season yesterday by claiming a dominant victory in the second leg of the Indy Lights Grand Prix of Alabama. Malukas led from flag to flag to complete a perfect weekend for HMD Motorsports, with the opening race winner and Global Racing Group with HMD Motorsports stablemate Linus Lundqvist, from Sweden, chasing him home in second place.

Once more at Imola the first three drivers crossing the finish line are of three different teams. The Swiss Gregoire Saucy, starting from pole position thanks to the great lap time of Q1 yesterday, obtains a fantastic win leading for the entire race. Behind him, Paul Aron, taking advantage of a terrible start by second on the grid Hadrien David, as did Zane Maloney in third.

The crash between Valtteri Bottas and George Russell was one of the big talking points of the Emilia-Romagna Grand Prix, and it only escalated as a point of discussion once the two drivers were grilled by the media on their respective interpretations of the incident that put both out of the race. It got a lot of RaceFans members talking, and ppzzus thought the crash dinted Russell’s growing status in F1.

I feel like Russell hurt his reputation a bit today. He went for it and it didn’t work out but keeps blaming others for his mistake.
Ppzzus