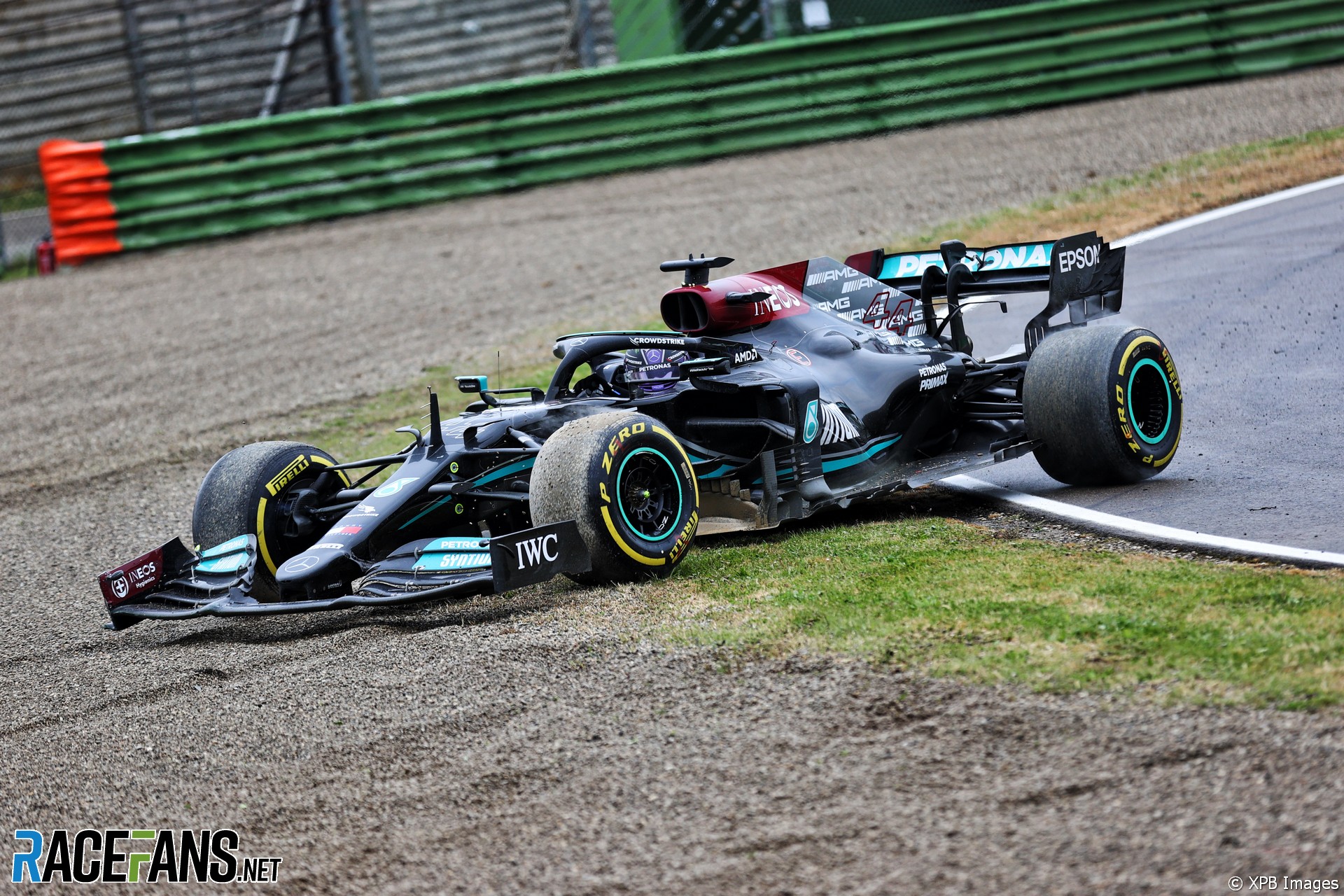 Lewis Hamilton’s misjudgement at Tosa during last weekend’s Emilia Romagna Grand Prix, which left his Mercedes briefly stranded in a gravel trap, looked like being a decisive moment in the race.

Remarkably, he got away with it, and he didn’t even need an enterprising Nurburgring marshal turning up with a crane. But, just as on that famous occasion in 2007, a few people took it badly.

As the W12 slithered to the edge of the trap, its wheels locked, Hamilton made a final, desperate attempt to retrieve the situation with minimal time loss. He cranked the wheel to the left, released the brake and stabbed the throttle. Perhaps the Mercedes would flick left onto the paved access road and he could escape quickly?

He couldn’t. The W12 merely jerked forwards into the barrier, breaking its front wing. A final insult.

The only way out of this situation was now to engage reverse gear. Formula 1 cars are required by the rules to be fitted with one, precisely in order to aid their recovery in this kind of situation.

Drivers rarely have cause to use reverse, however, and the world champion took 11 seconds to engage it. (That’s still better the Jimmie Johnson managed in yesterday’s IndyCar race.)

As Hamilton crawled backwards out of the gravel trap, his race engineer Pete Bonnington kept him updated on the radio about which drivers were approaching the scene, to help him rejoin the track safely:

From going off the track to rejoining it – backwards – took Hamilton nearly a minute. His race was surely ruined. Yet is wasn’t: By sheer luck, a crash on the following lap caused a red flag, which meant he got his lost lap back.

Predictably enough for any drama involving Hamilton, a hue and cry went up on some corners of social media that he must have broken the rules somehow. The possibility that reversing back onto the track might be illegal was seized on by a few.

FIA race director Michael Masi has had to explain some questionable calls in recent races. The decision not to investigate Hamilton for engaging reverse gear was not one of them.

“Reversing out of the gravel trap to the edge of the circuit, listening to Lewis’s radio between he and his team, they were absolutely advising him all the way through where [he] was, so in that particular circumstance I wouldn’t consider reporting that to the stewards,” he explained.

My first reaction to the social media uproar over Hamilton reversing onto the track was an eye-roll. His success has bred a lot of resentment, and no doubt some were disappointed to see him rebound from a near-terminal error to bag second place and keep the lead of the championship.

Sadly, there exists a wearisome few whose pathological hatred of Hamilton makes every lap he goes unpunished for some imagined grievance a travesty.

But perhaps that alone doesn’t explain why so many people were of the mistaken belief he’d transgressed.

The Formula 1 rule book is a dense piece of work. The sporting regulations alone – never mind the technical rules, the new-for-2021 financial rules and the over-arching International Sporting Code – run to over 42,000 words. Over the course of Hamilton’s 15 seasons in the sport they have more than doubled in length.

Even this is apparently not enough. The recent rows over track limits have revolved around the supplementary rules guidance issued by the race director at the start of every race weekend.

A sport as complicated as Formula 1, in which competitors build unique racing machines and unleash them on a different circuit every race weekend, is never going to be as simple to regulate as, for example, football. Nonetheless, the density of the regulations makes some aspects of the competition hard to follow.

In qualifying, Lando Norris lost a potential third on the grid because he strayed beyond the white line at one corner. That evening, I lost count of the different screengrabs I saw fans discussing on social media showing other drivers crossing the lines at other corners, without having their lap times deleted.

Those drivers went unpunished because different track limits were in force at those corners. But while the most dedicated fans will understand these quirks of the rules, they are hardly intuitive.

So on reflection I can understand how a casual fan might wonder whether Hamilton had broken some obscure rule without necessarily having it in for him. After all, five years ago he was reprimanded for allowing his car to roll backwards in the pits, where using reverse gear is illegal.

When F1 requires cars to have a reverse gear, it should be obvious that a driver isn’t automatically breaking the rules by using it. This isn’t just a case of fans’ biases towards a certain driver or educating them about the rules, it’s also a matter of how complicated the regulations have become.

Formula 1’s rules will never be simple, but they could certainly be simpler. Or at least have their most flagrant contradictions rectified.

Instead, the sport intends to ratchet up the complexity yet further, by introducing new race formats for different weekends.