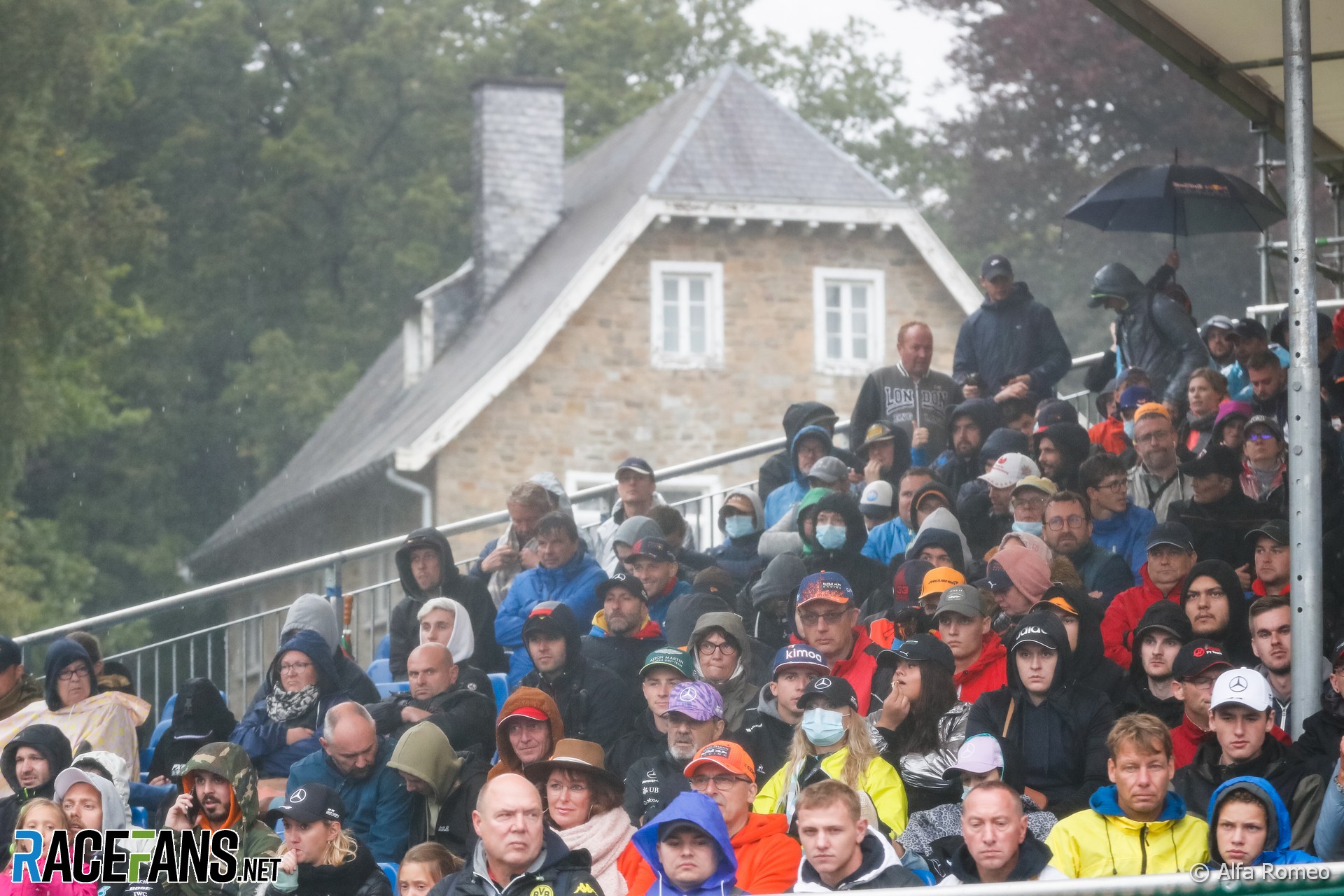 Last weekend tens of thousands of disappointed and soaked Formula 1 fans left Spa-Francorchamps without having seen a single racing lap in the Belgian Grand Prix.

Efforts to stage the race were abandoned due to the pouring rain. Fans at the track waited hours in dreadful conditions to see a short parade behind the Safety Car followed by a podium ceremony.

RaceFans spoke to two spectators who were in the crowd last weekend. While neither took issue with the decision not to start the race on safety grounds, both were unimpressed with how Formula 1 and the organisers handled the debacle.

Isabelle Rémond-Tiedrez and her partner travelled from Luxembourg to Spa. The family shelled out over €1,500 between them on a post-pandemic birthday trip with their British-based son.

“It was supposed to be an unforgettable and great day for our youngest kid as a gift for his 20th birthday to come at Christmas,” she told RaceFans. “As he goes back soon to UK for his studies, the timing was perfect.

“We paid €500 each to watch the GP “farce”, as Lewis Hamilton said. We fully agree that the safety of the drivers is key, but the organisation did on purpose to make us wait three hours and those two laps.

“As a result our son Gabriel was so disappointed and we seem to have failed to make him happy. Of course it will be an unforgettable day for him but not for the good reasons.”

János Henkelmann drove around 70 kilometres from Stolberg in Germany to attend last weekend’s race with his nephews, aged 10 and 13.

“As all the drivers pointed out, the conditions were lousy throughout the afternoon and I don’t think the race would have been longer than a few laps had it eventually been started,” he told RaceFans. “I guess it’s just not in a racing driver’s DNA to go slowly, even in the pouring rain, and at some point there would have been a big shunt, surely. Safety is obviously paramount and as a fan I’m in no position to expect the drivers to risk their lives.

“[FIA Medical Car driver] Alan van der Merwe was the real hero on Sunday as he gave it full beans on the straight every time he went out to see if the conditions had improved.”

He believes FIA Formula 1 race director Michael Masi did see a genuine opportunity to restart the race when the conditions improved slightly later in the afternoon.

“The rain had indeed eased a little bit for about 10 minutes when they tried to finally start the race at about six o’clock. It was the first time since the early afternoon that you could see the forest on the opposite side of the track behind Blanchimont and not just clouds and mist.

“I genuinely believe that Masi wanted the cars to race and that he saw a legitimate chance of finally getting the grand prix under way. At that point that was the maximum he could do.”

The second and final attempt to start the race was swiftly abandoned, however. As no racing had taken place, Henkelmann found it strange to see Formula 1 carry out its usual podium ceremony.

“We left the track after the race had finally been suspended for good and as we walked past Eau Rouge, the iconic overture from Carmen was playing over the public address system. It felt like pure mockery that they even bothered to stage a podium ceremony.

“When we came home I visited the promoter’s website to see if there was any news or communication on the situation from their side and I was stunned to see that they had already put their terms and conditions on their start page, as if they subtly wanted to tell everyone: ‘Fuck you! We had a race and you’re not getting a penny back.'”

“While freezing in the rain next to the Kemmel straight and seeing the cheering crowds in the grandstand at the start/finish line I realised that while F1 is and always will be the sport I love the most, it’s also a sport for the elites, i.e. for people who are able to pay over €500 for a ticket and have a dry seat,” he added. “I’m too young to tell if that has always been the case but it certainly shouldn’t be now and even less so in the future.”

“In my opinion, F1 cannot continue to thrive if it doesn’t take care of the ‘normal fan’,” said Henkelmann. “What if – instead of repeatedly saying how sorry everyone was for the fans – they had send out the cars to do some demonstration laps after suspending the race? My nephews were so excited when they finally saw the cars, albeit only for a couple of laps behind the safety car. It would have made their day (and helped them forget about waiting three hours in the rain) to see some more track action at least.

“So, as a result of what we saw – or rather didn’t see – on Sunday, I hope the most prominent voices in F1 (drivers, team bosses, commentators) make their voices heard on behalf of the fans and somehow convince the promoter or the management or both to refund us or to give us free tickets for next year. Because after all, we paid to see a race and there was none.”