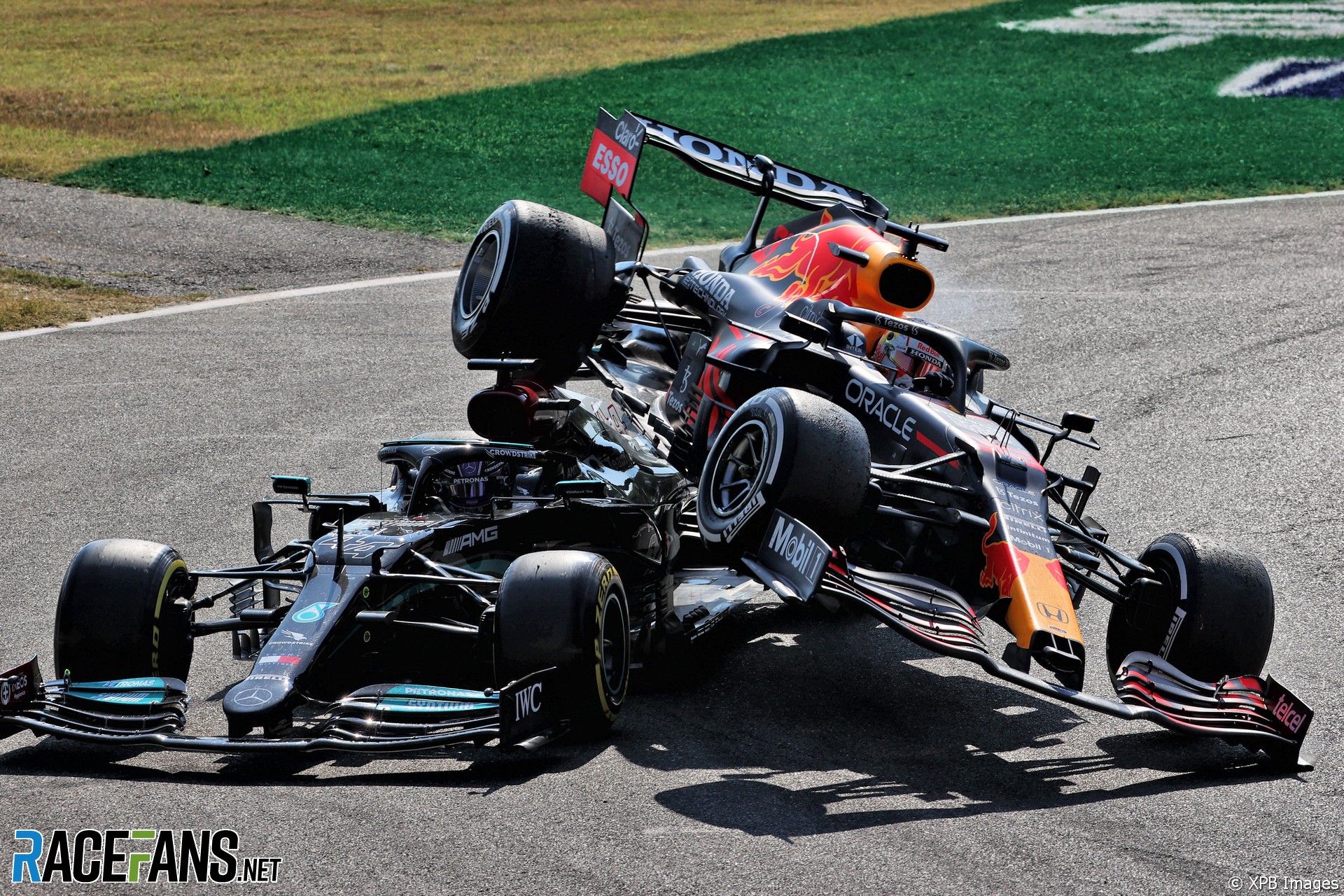 Who was to blame in the race-ending clash between Lewis Hamilton and Max Verstappen in the Italian Grand Prix?

Verstappen and Hamilton tangled on lap 26 of the 2021 Italian Grand Prix at turn two in the Rettifilo chicane.

Prior to the collision Hamilton, who had run behind Verstappen for the opening part of the race, emerged from the pits ahead of the Red Bull driver. The pair went into turn one with Hamilton ahead and Verstappen on his outside.

After rounding turn one, Verstappen attempted to pass Hamilton on the inside of turn two where the pair made contact. Their wheels touched and Verstappen’s car was thrown into the air, landing on top of the Mercedes, putting both out.

Following the collision Verstappen said on his radio: “That’s what you get for not leaving space.” Hamilton’s camera was damaged in the collision and no reaction was broadcast.

Hamilton said he was aware of Verstappen’s position as they followed Daniel Ricciardo into the corner.

“I came out, I saw Daniel came past, Max was coming, I made sure I left a car’s width on the outside for him,” said Hamilton. “I went into turn one and I was ahead, I was ahead going into turn two and then all of a sudden he was on top of me.”

Verstappen accused his rival of failing to leave him space. “He just kept on pushing me wider and wider,” said the Red Bull driver. “At one point there was no way to go, he just pushed me onto the sausage kerb and that’s why, at the end of the day, we touched because of the rear tyre bumped up to his tyre.”

The incident in pictures

Both drivers were investigated over the collision. Verstappen was found to be “predominantly to blame for the incident”. The following regulation was cited as the reason for his penalty:

Causing a collision, repetition of serious mistakes or the appearance of a lack of control over the car (such as leaving the track) will be reported to the stewards and may entail the imposition of penalties up to and including the disqualification of any driver concerned.
International Sporting Code appendix L, chapter four, article 2(d)

The stewards explained why Verstappen was considered to have broken the rule:

The driver of car 44 [Hamilton] was driving an avoiding line, although his position caused car 33 [Verstappen] to go onto the kerb. But further, the stewards observed that car 33 was not at all alongside car 44 until significantly into the entry into turn one. In the opinion of the stewards, this manoeuvre was attempted too late for the driver of car 33 to have “the right to racing room”. While car 44 could have steered further from the kerb to avoid the incident, the stewards determined that his position was reasonable and therefore find that the driver of car 33 was predominantly to blame for the incident.
2021 Italian Grand Prix stewards document 64

Who do you think was responsible for the collision? Were the stewards correct to issue a penalty? Cast your vote below and have your say in the comments.

Who was to blame for Hamilton and Verstappen's collision at Monza?

80 comments on “Who was to blame for Hamilton and Verstappen’s collision at Monza?”