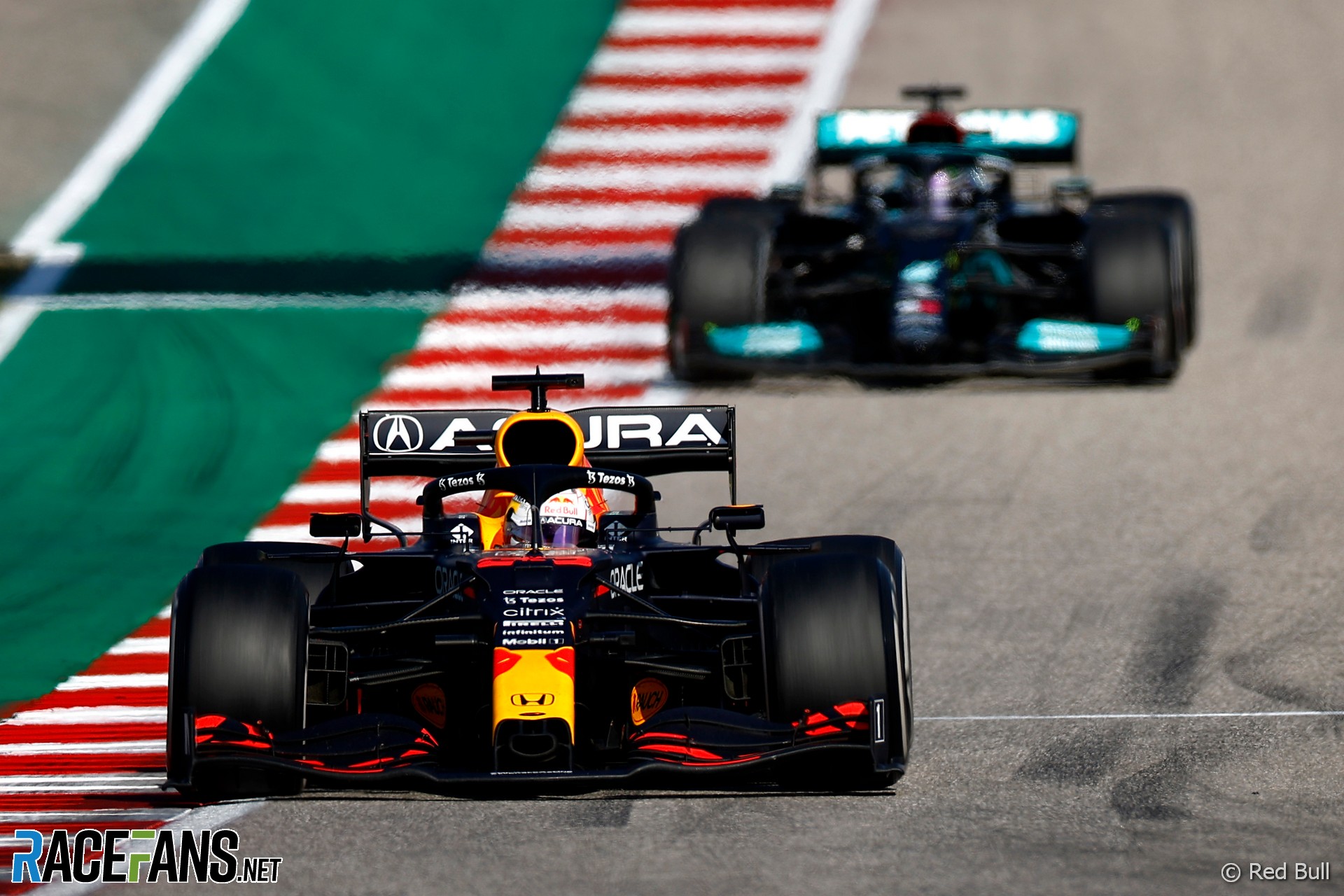 Max Verstappen and Lewis Hamilton gave the very best of themselves in a tense and absorbing United States Grand Prix, played out before a rammed audience at the Circuit of the Americas.

The Red Bull driver prevailed, but only narrowly, Hamilton chasing him home, poised to strike throughout the final laps had Verstappen made the slightest error.

None came, and the world championship leader increased his points lead by executing his team’s bold strategic choice to perfection.

In three of the previous five races at the Austin circuit, the driver who lined up second had taken the lead. The wide, inviting, tight first corner means whoever starts second only needs to make a slightly better start than the pole-winner to have a decent shot at passing.

Hamilton did exactly that. Verstappen moved to cover him off, but wisely elected not to force the issue. The pair have clashed twice already this year, and nearly did again in Friday practice, but this time they avoided each other.

Hamilton eased Verstappen wide onto the run-off, just as he had done six years earlier to his then-team mate Nico Rosberg. Verstappen had cause to thank the FIA’s pre-race decision to remove the sausage kerbs from the exit of the corner, which would have cost him more time and potentially vital places. Behind him Sergio Perez, playing a perfect rear-gunner role, backed out of passing his championship-contending team mate.

Mercedes expected they wouldn’t be competitive on the medium compound rubber at the start of the race, and so it proved. Hamilton seldom drew more than a second clear of Verstappen. Perez drifted slowly out of contact, while the gap to the midfield opened up more rapidly.

However Mercedes were wary of pitting early, dropping into traffic, and having to run long stints later in the race. Red Bull pounced, bringing Verstappen in on lap 10.

In the eyes of Mercedes team principal Toto Wolff, this was a “courageous move, because it was very early.” It meant bringing him out behind Daniel Ricciardo, but he caught his former team mate on the back straight and lost little time. Mercedes immediately saw that bringing Hamilton in would doom him to falling behind Verstappen, and so decided to press on.

After three more laps, Hamilton came in. By this stage he was losing two seconds per lap to Verstappen, plus Perez had pitted as well, and Mercedes could not afford to risk another place. After a swift stop Hamilton was back on his way with a set of hard tyres.

The Mercedes has usually been happier on harder rubber, and so it proved. With slightly fresher tyres, Hamilton began to take half a second per lap, and more, out of Verstappen. By lap 26 he’d cut Verstappen’s lead from 6.7 seconds to less than three.

Perez was by not out of the picture. He came into the race with one fewer set of hard tyres and therefore had to run his middle stint on mediums. That plus the growing burden of racing a physically punishing track on a warm day with a broken drinks system meant his lap times were creeping up.

Red Bull therefore had to bring Verstappen in pre-emptively to avoid Mercedes returning the favour from the first round of stops and getting Hamilton ahead by pitting him first. He was in for fresh rubber again on lap 30.

Hamilton stayed out until the 38th tour, and by the time he’d pitted and resumed in second, the pair were separated by 8.8 seconds. But Hamilton’s tyres were eight laps newer, and after gently coaxing them up to speed, he let rip with the fastest lap of the race so far, and took 3.3 seconds out of Verstappen in two laps.

Verstappen responded by increasing his own pace, but still Hamilton continued to draw in. With half-a-dozen laps to go there was just one-and-a-half seconds between them. Now Hamilton encountered the familiar buffer of turbulence and his lap times briefly rose. Verstappen enjoyed brief respite, for two laps, until his tyres began to show signs of fading.

Hamilton was growing larger in his mirrors yet falling tantalising short of the Red Bull driver’s DRS zone. Traffic complicated Verstappen’s life further. Yuki Tsunoda seemed unco-operative for a driver who two weeks ago said he wanted Verstappen the win the title, but Mick Schumacher proved a greater obstacle. Verstappen unhelpfully caught the Haas in the sweeping turns 16, 17 and 18, losing three-tenths of a second.

But that also meant Verstappen passed through the DRS detection point approaching turn 19 within a second of the Haas. That allowed him to use DRS, while the chasing Hamilton wasn’t close enough to gain the benefit. Verstappen eked out his lead by half a second on the final lap, and took the flag just 1.3 seconds ahead of his rival.

The wheel-to-wheel fight between the title contenders which over 140,000 Americans turned up to see never materialised. But it was a showcase of driving excellence by the pair of them, either of which could have won. The ailing Perez arrived home over 40 seconds after his team mate.

The second Red Bull came in just 10 seconds ahead of the first of the Ferraris. Ominously for McLaren and their hopes of holding on to third in the constructors’ championship, Charles Leclerc was 24 seconds ahead of Daniel Ricciardo in the first of the McLarens. The other Ferrari of Carlos Sainz Jnr would surely have been higher up had he not started the race on the unfancied soft rubber and lost time in his second pit stop.

Sainz therefore came in behind Valtteri Bottas, who struggled to make progress from ninth on the grid in his Mercedes. He lost a place to Tsunoda at the start and was ruled to have illegally gained a place from Pierre Gasly, who he was advised to let by. Bottas ran a longer first stint than his team mate but a shorter middle stint, and was able to pass Sainz for sixth.

An unhappy Norris was the last driver on the lead lap in eighth place. He seemed hard done by on the first lap, where he went down the inside of Sainz at turn 12 with Ricciardo on the outside of the pair of them. While the two McLaren drivers kept within the track boundaries, Sainz ran off and rejoined in front of both.

Nonetheless the stewards were then content for him to let just one, Ricciardo, past, and a later instruction to allow Norris by as well was not heeded. It was one of many doubtful calls relating to track limits which occured during the afternoon.

Tsunoda scored his first points since the Hungarian Grand Prix in ninth after a solid afternoon’s work. He infuriated his team mate early in the race by holding him up while his soft tyres faded, though Pierre Gasly’s race came to an end soon afterwards anyway with suspension failure.

Sebastian Vettel claimed the final point having started 18th due to a power unit change penalty. He was 15th by the end of lap one, and went against the grain by selecting mediums tyres for his first two stints, before passing both Alfa Romeos in his final stint on mediums. The last of those, Kimi Raikkonen, allowed Vettel by when he spun off.

Fernando Alonso, who started one race behind Vettel having also changed power units, gave his team some pre-race encouragement on the radio in what was proving a difficult weekend for Alpine: “Not a good weekend so far but let’s do a perfect race, see what result we can get.”

But there was less motivation and more indignation on Alonso radio once the race began and he became involved in a series of contentious disputes with the Alfa Romeo drivers. Having seen Raikkonen pass him after going off at turn one, a fuming Alonso used the run-off at turn 12 to pass Raikkonen’s team mate and was later told to relinquish the position. He eventually did, then the process was reversed when Alonso passed Giovinazzi again and the Alfa Romeo driver went off to stay ahead. He, too, was told to give up the place.

In many respects the Circuit of the Americas is an ideal example of what a modern permanent racing circuit should look like. Probably the only way it could be improved is if some of the generous asphalt run-offs which regularly cause track limits disputes were replaced with grass or gravel.

Two weeks ago in Turkey, Verstappen re-took the championship lead but also recorded his third consecutive win-less finish, the first time that had happened all year. Mercedes had won back-to-back races, lending weight to the sense the championship fight was trending in their direction.

In Austin, Verstappen demonstrated they are very much in the title fight. Their performance advantage was fractional, and Hamilton’s slightly better start forced them to take a risk on strategy which paid off.

It was a race either driver could have won, and it was Verstappen who won it. The United States Grand Prix therefore looked like a significant moment in the championship fight. But with just 12 points between them and five races still to run, it’s not going to be over soon.