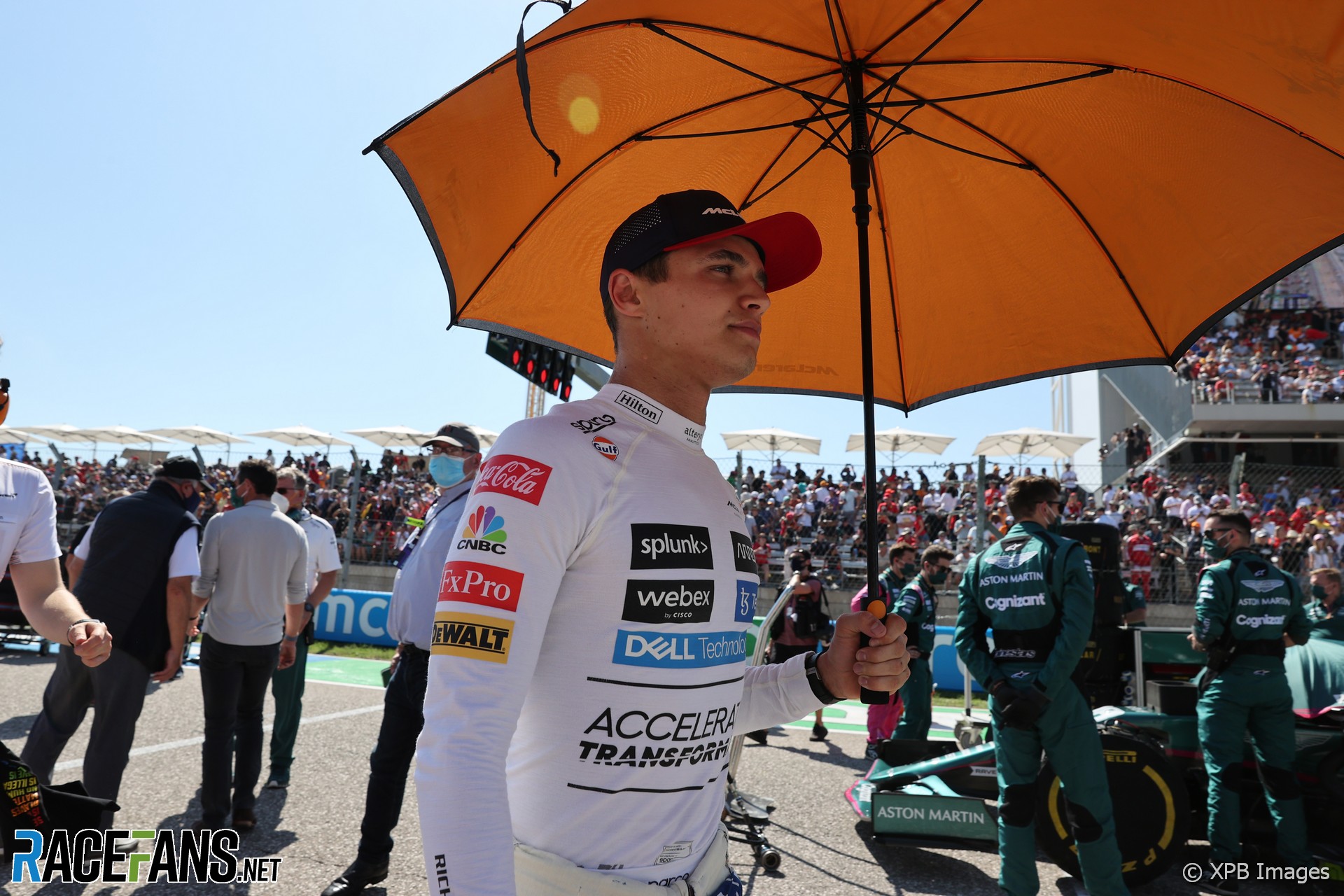 In the round-up: Lando Norris says it feels like Formula 1 is getting back to normal after the pandemic.

F1 felt like it got back to normal at the United States Grand Prix in Austin, says Lando Norris, as a packed crowd watched the race and more people were allowed into the paddock.

“It was epic,” said the McLaren driver. “It’s difficult when you’re racing and focussing so much but the in-lap and also the parade lap we did earlier today, it’s pretty awesome to see how many people there were.

“Similar vibes to Silverstone with how many people there were in the grandstands along the banks and stuff. And very enthusiastic as well the fans here.

“It’s lovely to have them back and also for them to come onto the track and stuff at the end, things feel like a lot more back to normal and how Formula 1 should be now with more guests and media and VIPs back in the paddock. It feels more like Formula 1.”

Former Williams designer Antonia Terzi has died, the team has confirmed. The 50-year-old was involved in a car accident in the UK earlier this week.

Terzi rose to the position of chief aerodynamicist at the team between 2003 and 2004 and contributed to their race-winning BMW-powered cars raced by Juan Pablo Montoya and Ralf Schumacher. They included the eye-catching, ‘walrus-nosed’ FW26, which had scored the team’s most recent victory until Pastor Maldonado’s shock win in the 2012 Spanish Grand Prix.

“We are deeply saddened to learn of the passing of our former colleague and chief aerodynamicist, Antonia Terzi,” said the team. “Our thoughts go out to Antonia’s friends and family at this difficult time.”

What a day driving at @IMS in an @IndyCar w/ @FollowAndretti (can’t believe I can truthfully say that) #allandretti pic.twitter.com/LeoGvrLFG5

The next two races on the #F1 calendar have new names: It's the Mexico City Grand Prix this weekend followed by the Sao Paulo Grand Prix.

From earlier this year, here's why more races are swapping country names for cities or regions:https://t.co/tKph9O13UA#F1

"What happened in Monza? Verstappen took Lewis out because he was about to overtake and he was quicker. And that is totally understandable. If you are racing for the championship and you see it fading away because the other guy is overtaking you, what tool have you got other than the one that makes sure he can't overtake? We've seen it with Schumacher and Villeneuve, we saw it with Senna and Prost twice."

F1 is considering not broadcasting the first pre-season test session next year.

"Three races is very tough on everybody but it’s part of it now. If the demand is there, as we saw in Austin, we need to fulfil this demand and try to provide the show for the fans. If they want it, we need to be there when they want it. It’s tough but it’s also a period of time you get used to in some ways, and I think we’ll go into that at one stage and it will be normal."

"As we approach the final races of the season, we need to maintain our focus and get the very best out of the FW43B at each of the remaining events, but we must not lose sight of the fact that this is a very demanding time of the year for the travelling team, many of whom won’t see home or their families for several weeks."

Does F1’s choice of location in Miami mean its race is doomed to underwhelm?

Yes it is close to a city and that stadium looks cool. But didn’t F1 tried that once before?

I want this Miami race to work but I feel like this idea was too easy. Yes there are all those FIA Grade One rules but a car park… really?
@Qeki