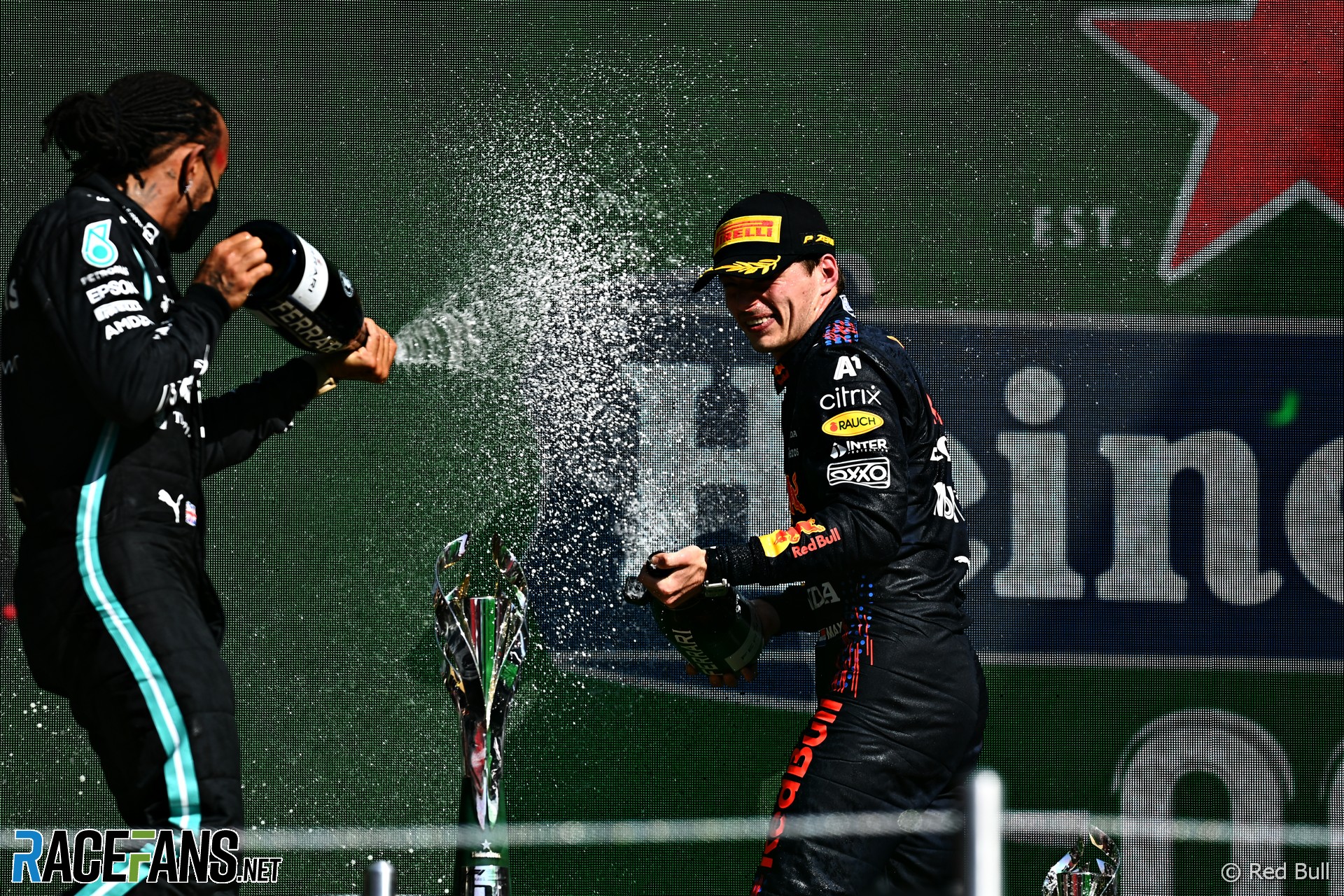 [raceweekendpromotion]Another win for Max Verstappen this weekend could seriously damage Lewis Hamilton’s title hopes, and the sprint format offers a potentially bigger pay-out to whoever is on top in Brazil.

Here are the talking points for the Sao Paulo Grand Prix.

Can Hamilton turn his title slump around?

It’s a lazy journalistic trope to describe any of many upcoming races as a ‘must-win’ for a driver or ‘pivotal’ to the championship contest. But for the first time all year one of the title contenders is in a position where they could make themselves the clear favourite to clinch the crown.

Verstappen holds a 19-point lead as the teams head to Interlagos. If he leaves with a 24-point advantage, he will be able to win the title without beating his rival in any of the remaining three races.

The title contenders’ past form in Brazil gives Verstappen cause for confidence. He saw off Hamilton to win the last race at this track in 2019 (the pandemic prevented a return last year). Verstappen should have won in 2018 as well, but tangled with the lapped Esteban Ocon, letting Hamilton through.

That was only Hamilton’s second win at this track, however. The venue has never been among his strongest. He’s lost points to Verstappen in six of the last seven rounds, and if he can’t reverse that trend here, his title hopes will look increasingly forlorn.

Ahead of the third and final sprint qualifying event of the season Formula 1 has accepted the format needs significant change before it returns for an expanded run of six events next year.

The perpetually over-egged claims of its popularity fail to obscure the fact that, although increasing the number of competitive sessions across a weekend has increased viewership, the Saturday race itself has added little. Except for messing up the pole position statistics, which the series has vowed to fix for the 2022 F1 season.

Will a sprint qualifying race at Interlagos prove more successful than the events at Silverstone and Monza? The low tyre degradation at Monza seemed to be a limiting factor in the quality of the action. Interlagos tends to produce livelier races, so there’s some cause for optimism.

Coincidentally, the two title contenders have collided in each of the grands prix which were preceded by sprint qualifying races this year. What chance a hat-trick?

The constructors’ fight closes up

The fight for the constructors’ title has come alive in the past two races, as Red Bull have slashed what was a 36 point lead for Mercedes. The two teams are now separated by a single point.

This has come about largely thanks to Sergio Perez hitting his stride and boosting Red Bull’s hauls. Having only reached the podium twice in the first 15 races, he’s now on a run of three in a row.

It’s even closer in the contest for fifth place, where AlphaTauri are now tied with Alpine, largely thanks to the efforts of Pierre Gasly. However Yuki Tsunoda has raised his game in recent races as well, even if he had little to show for it in Mexico due to a power unit change penalty and a first-lap retirement.

Meanwhile the lead has changed hands in the contest for third place. Ferrari have held the upper hand in their fight with McLaren since introducing an upgrade to their power unit, and finally made that tell in their points tally after Mexico. McLaren badly need to get back on terms with them this weekend.

This was a pivotal race for Gasly two years ago, as he scored the first podium finish of his career a little over two months after being dropped by Red Bull, and in the wake of the death of his friend Anthoine Hubert.

Since then Gasly has made a persuasive case for his promotion back to a top team, winning at Monza last year and almost single-handedly advanced AlphaTauri’s cause in the teams’ title fight. Last time out he saw off both Ferraris for a superb fourth place. Will he lead the midfield home again?

Can Giovinazzi finally grab a point?

On Sunday Antonio Giovinazzi took the chequered flag in 11th place – first of the non-points-scorers – for the third race in a row. It was an especially bitter result as he’d got his Alfa Romeo up to sixth place in the aftermath of the first-lap drama. The team later admitted it had misjudged his strategy.

His hopes of retaining his drive for next year seem increasingly forlorn. While his qualifying pace has looked good compared to team mate Kimi Raikkonen, he hasn’t had the race results to show for it, and he admitted as much ahead of last weekend’s race. He may not have many more chances left to grab a result which may boost his morale, if not save his seat.

Are you going to the Sao Paulo Grand Prix?

If you’re heading to Brazil for this weekend’s race, we want to hear from you:

Who do you think will be the team to beat in the Sao Paulo Grand Prix? Have your say below.