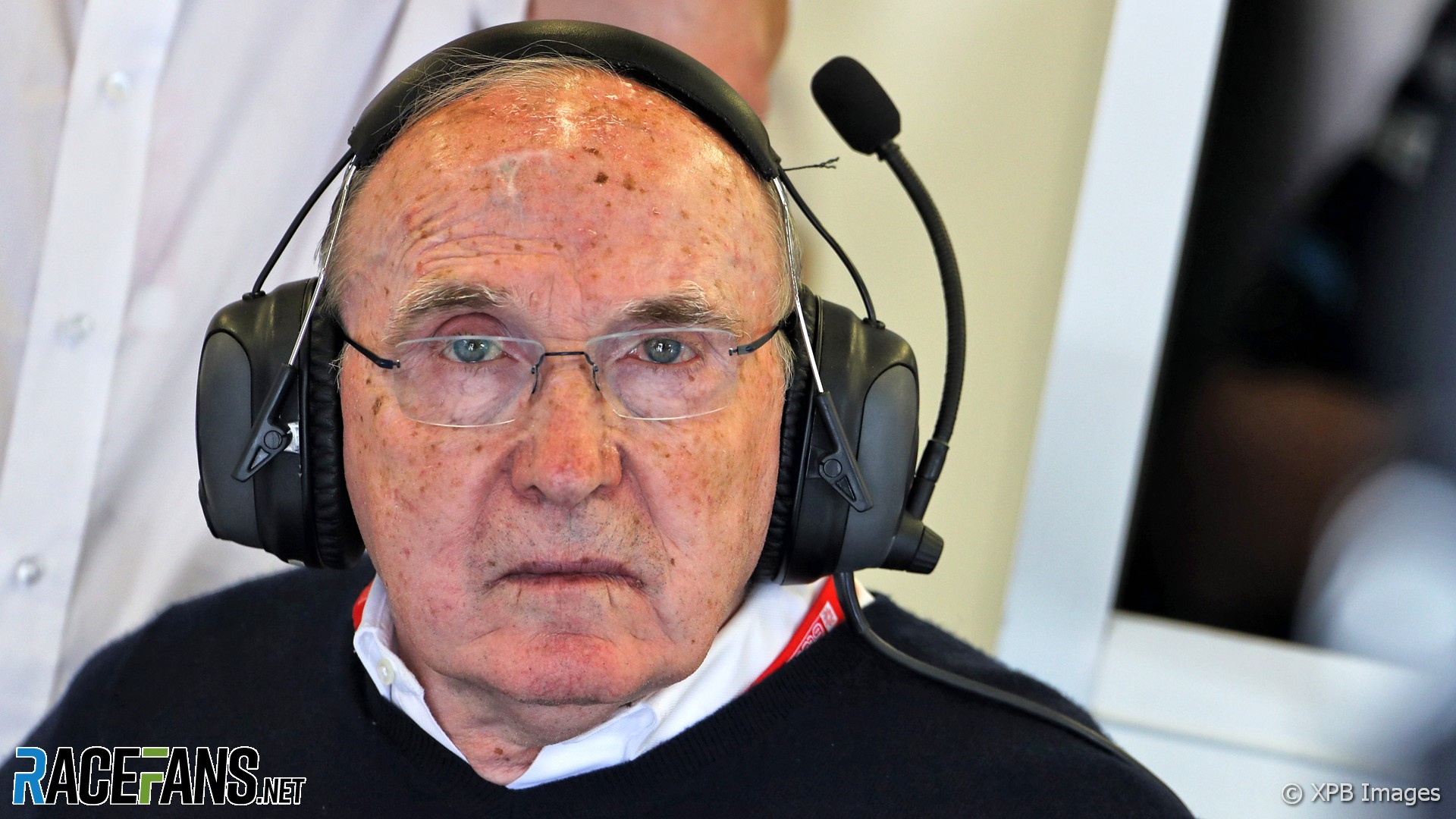 Williams team founder Sir Frank Williams has died at the age of 79, his family have confirmed via the team’s owners.

“It is with great sadness that on behalf of the Williams family, the team can confirm the death of Sir Frank Williams CBE, founder and former team principal of Williams Racing, at the age of 79,” they said in a statement.

“After being admitted into hospital on Friday, Sir Frank passed away peacefully this morning surrounded by his family.

“Today we pay tribute to our much loved and inspirational figurehead. Frank will be sorely missed. We request that all friends and colleagues respect the Williams family’s wishes for privacy at this time.

“For those wishing to pay tribute, we ask that donations are made in place of gifts to the Spinal Injuries Association, alternatively we would welcome flowers to be placed at the entrance of the team’s headquarters in Grove, Oxfordshire. Details of the memorial service will follow in due course.”

Having run customer Formula 1 cars and briefly formed an alliance with Walter Wolf before the pair split, Williams’ independent team scored its first victory in Formula 1 on home ground at Silverstone in 1979. That breakthrough victory by Clay Regazzoni signalled the beginning of the team’s golden years, which spanned more than a decade.

During that time Williams racked up over a hundred race wins and more constructors’ championships than any of its rivals bar Ferrari. Alan Jones, Keke Rosberg, Nelson Piquet, Nigel Mansell, Damon Hill and Jacques Villeneuve won titles with the team.

Following its breakthrough successes in the early eighties, Williams’ new partnership with engine manufacturer Honda was beginning to bear fruit when the team’s founder suffered a life-changing car accident at the beginning of 1986. He sustained serious injuries to his spine which left him without the use of his arms and legs for the rest of his life.

Despite this, Williams soon returned to the helm of his team and remained there for decades accompanying them around the world and overseeing their later dominance of the sport from his wheelchair.

By the 2010s, with the team’s performance in decline and Williams’ advancing age taking a toll on his ability to travel to races, he stepped aside and promoted daughter Claire Williams in his place. The team’s most recent success came courtesy of Pastor Maldonado’s shock victory in the 2012 Spanish Grand Prix at the Circuit de Catalunya.

By 2020 Williams had fallen to the back of the grid and following the financial impact of the Covid-19 pandemic it was sold to current owner Dorilton. The owners chose to preserve its identity, which for many years had been associated with dominance of the sport.

“The Williams Racing team is truly saddened by the passing of our founder Sir Frank Williams,” said CEO and team principal Jost Capito. “Sir Frank was a legend and icon of our sport.

“His passing marks the end of an era for our team and for the sport of Formula 1. He was one of a kind and a true pioneer. Despite considerable adversity in his life, he led our team to 16 world championships making us one of the most successful teams in the history of the sport.

“His values including integrity, teamwork and a fierce independence and determination, remain the core ethos of our team and are his legacy, as is the Williams family name under which we proudly race. Our thoughts are with the Williams family at this difficult time.”