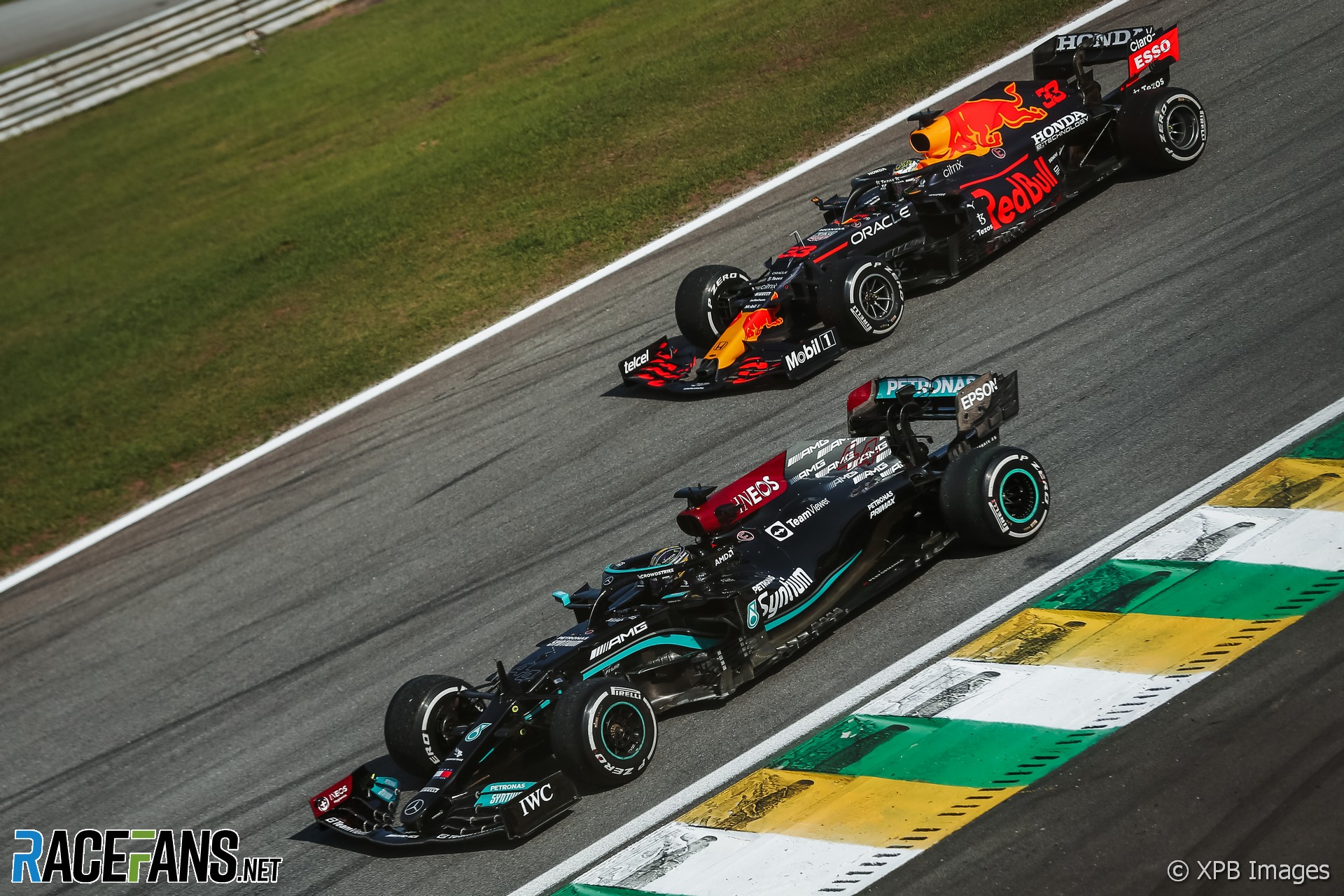 After one of their most dominant seasons in 2020, in which they delivered another pair of titles, Mercedes’ domination of the V6 hybrid turbo era faced its greatest challenge yet in the shape of Red Bull last year.

Not only did Red Bull catch them, but other teams from the chasing pack occasionally took the fight to them in qualifying, notably Ferrari and McLaren.

Normally that would have been surprising, given how much of the 2021 cars were simply adapted versions of their predecessors to suit the transitional nature of the new regulations before a major shift to the radical new aero package for 2022. However, the few technical rules that did change for 2021 around the rear of the car had a striking impact on those teams that ran with a low rake aero philosophy – Mercedes and Aston Martin.

That effect was clear from the very first race. Red Bull beat Mercedes to pole position, but Lewis Hamilton won the season-opener thanks to clever strategy by his team and Max Verstappen failing to make a late passing attempt stick when he ran off-track.

But within a few races Red Bull clearly had the fastest car on the grid for the first time since the adoption of the V6 turbos back in 2014. Mercedes unable to match the ultimate pace of the Red Bull in the hands of Verstappen from the Monaco Grand Prix of round five through to the Austrian Grand Prix.

This stretch saw Red Bull take five consecutive victories and, with it, inflict Mercedes’ longest win-less streak since 2013. Two surprise poles for Ferrari and Charles Leclerc – benefiting in no small part from red flag interventions – arguably were the only thing that prevented Verstappen from a six-race pole streak, meaning he had to settle for four on the bounce instead. A clear demonstration of the potency of the Verstappen, Red Bull and Honda package over a single lap.

This wasn’t the first time during the hybrid era that Mercedes were challenged by a rival. But the combined gains made by Red Bull and Honda presented a more serious threat than ever before, and Mercedes had to react.

They responded with their final major upgrade package of the season at the British Grand Prix just before the summer break. The impact was clear with Hamilton taking the win at Silverstone, albeit after clashing with Verstappen. But then a series of highly eventful races with unconventional outcomes obscured the true potential of both cars at the front of the field.

Rain in Hungary, Russia, Turkey and a complete wash-out in Belgium saw the focus fall on the midfield. And it was a truly tumultuous year for performance among the pack.

Ferrari appeared to have bounced back from their woeful 2020 season with some solid, consistent points throughout the early phase of the year. Then, in France, their inability to get their tyres working around the Paul Ricard circuit left Ferrari falling down the order, swallowed up by the field as they dropped out of the points.

This one poor race allowed McLaren to gain significant ground in the constructors’ championship and jump up to third place. But they were not the only midfield team to enjoy success around the summer break.

The mid part of the season saw a convergence of a group of teams, with McLaren, Ferrari, AlphaTauri – predominately through the efforts of Pierre Gasly – and even Alpine and Aston Martin seeing their relative pace fluctuating on an almost race-to-race basis. While McLaren were undoubtedly assisted in Monza by Verstappen’s slow pit stop and the eventual collision between the two title rivals that saw both retire, Daniel Ricciardo’s Italian Grand Prix race pace was genuinely strong enough to give him a realistic chance at victory even if Verstappen and Hamilton had not collided.

By the end of the year, the trio of Ferrari, McLaren and AlphaTauri – aided by improved results from Yuki Tsunoda – established themselves as the clear ‘B-tier’ of the grid. Ferrari, now consistently quicker than McLaren once more, gradually overtook their long-time rivals in the standings and pulled away, taking a comfortable third place by season’s end.

Needless to say, the one team that the most consistent performance throughout the season was Haas – only because of how much slower they were than the rest of their rivals.

By the end of the season, Mercedes appeared to have fully transformed their deficit to Red Bull into an advantage at most venues, with some exceptions. Aided by the extra grunt offered by a fresh power unit, the way Hamilton scythed through the field in Brazil both on Saturday and then Sunday was a visceral demonstration of how strong Mercedes now were. Despite this, Verstappen was still able to beat Hamilton to the victory in the United States and Mexico, which proved to be the final time that Red Bull held the upper hand on race pace over the end of the season.

Hamilton followed up his heroics in Brazil with a controlling victory in Qatar and won in Saudi Arabia to make it three in a row, after a messy race-long battle with Verstappen. Heading into the final race of the season and championship deciding round in Abu Dhabi, Verstappen’s pole position only meant that he spent the first hundred metres or so of the race ahead of Hamilton and could not get close enough beyond an aggressive lunge on the opening lap to reclaim the championship-clinching position from his rival.

That is, until the final lap, and the moment which decided the destiny of the title.

Based on these figures, the overall conclusion is that Mercedes were a minuscule 0.058% quicker than Red Bull on average over the course of the season. Over a typical 90-second lap, that’s an advantage of just five-hundredths of a second.

By the standards of past seasons that’s tremendously close. Arguably, it was even closer than that raw figure indicates.

For example, the figures don’t always adequately reflect how competitive Red Bull were in qualifying. In Portugal Verstappen lost his fastest time in Q3 due to exceeding track limits – a lap that would have seen him on pole. Verstappen was furious in Monaco when Charles Leclerc’s crash secured the Ferrari driver pole when he was halfway around his fastest lap of the weekend. Then there was Mexico City, where both Red Bull drivers were compromised in Q3 when seemingly quicker than Mercedes. And in Saudi Arabia, what could have been Verstappen’s most impressive lap of the season ended in the wall on the 24th and last turn.

Adjusting for these by reinstating Verstappen’s lost lap in Portugal and putting Red Bull on a par with Mercedes in Mexico (though they were probably faster) would leave Mercedes faster by just 0.017% on average – or just 0.015s over a 90 second lap. It is important to note, however, that the two tracks we omitted due to weather conditions – Spa and Russia – were venues which likely played to Mercedes strengths.

Mercedes’ overall advantage did enable them to secure their eighth consecutive constructors’ championship, but it was with their slimmest performance advantage of any season since their dominance began in 2014. Crucially, it was one which often brought the title contenders within the margin of error of each other, meaning there were days when whichever of them did the better job won the race.

The impact of the 2021 regulations on Mercedes and Aston Martin can be seen in how the only teams who lost relative performance compared to last season – other than Haas – were the two chassis adapted from a low rake aerodynamic concept.

During a typical off-season, this data would typically provide some insight into what we may expect to see from teams in the upcoming season. That is not the case heading into 2022, however.

The magnitude of the comprehensive changes to bodywork aerodynamics and weight along with the scaled restrictions on aero testing depending on championship position would be enough on their own. But add to them the fact that many teams abandoned development on their 2021 cars far earlier than in a typical season and we are left with a complex cocktail of circumstances that makes speculating over who will arrive in Bahrain as the benchmark team a guessing game.

But after years of convergence in car performance between the ten teams resulting in one of the most competitive and enthralling seasons for many years, whether 2022 will prove just as close is unknown.

113 comments on “Analysis: Did Hamilton or Verstappen have the quickest car for their title fight?”