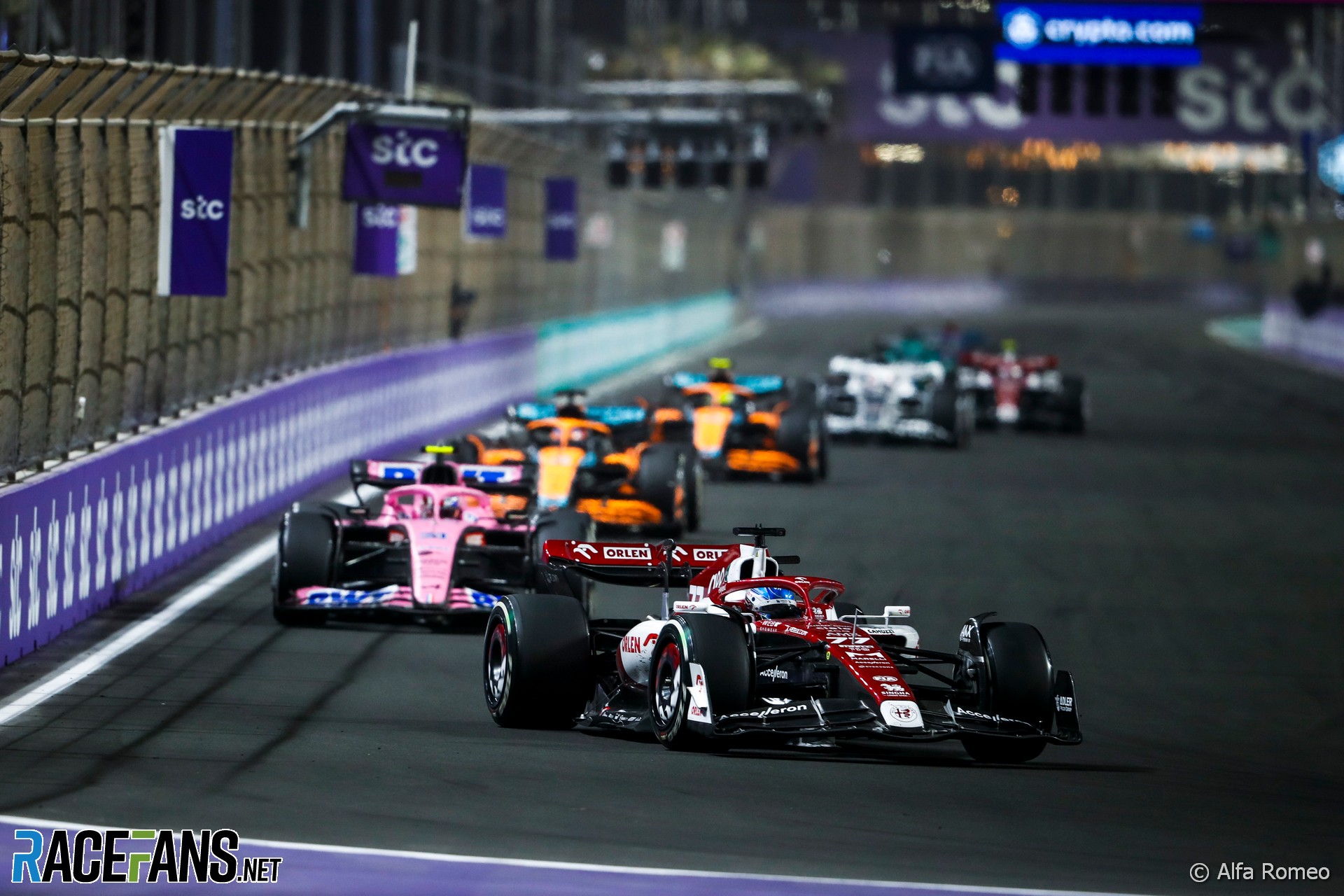 In the round-up: Alfa Romeo driver Valtteri Bottas says his team should target being “best-of-the-rest” behind Ferrari and Red Bull.

Alfa Romeo ‘should aim to be best-of-the-rest’ – Bottas

Alfa Romeo driver Valtteri Bottas says that his team should target being “best-of-the-rest” behind Ferrari and Red Bull.

Bottas sits ninth in the championship after a sixth place finish in Bahrain and a retirement in Saudi Arabia. After qualifying sixth and eighth over the first two race weekends, Bottas says that being consistently at the front of the midfield is what Alfa Romeo should be aiming for over the rest of the season.

“I think that needs to be the target now,” Bottas said. “We seem to be more or less in the same place than in Bahrain, even though I thought [Saudi Arabia] could be maybe more difficult.

“I think aiming to be the best-of-the-rest is good motivation and a good target. So hopefully eventually we can fight for fifth position in the race – that would be a good step for us.”

Esteban Ocon said fighting his world championship-winning team mate Fernando Alonso is a “privilege” following their spirited duel in the last round.

Ocon and Alonso fought hard over the early phase of the Saudi Arabian Grand Prix, with Alonso eventually passing his Alpine team mate. Ocon believes it is a good sign that he and his team mate are able to race each other hard.

Australia a “special race” for Norris

Lando Norris says that he is looking forward to racing at Albert Park for the first time since making his grand prix debut in 2019.

The Australian Grand Prix has not been held since the 2019 event due to the impact of the Covid pandemic. Norris is excited to race at Albert Park again.

“I’m looking forward to getting out on track in the new car in Melbourne, especially with the changes they’ve made since we last raced there three years ago,” Norris said.

“I’m excited to see what progress we can make. It’s a special race for me, as I made my debut there in 2019 and with the pandemic, we haven’t raced there since, so I’ve been working hard in the sim to get back up to speed with the track, especially with the new changes.

Ride onboard with us for a lap around Albert Park! 🤩

The combination of different nationalities means we can work together and find solutions to problems in a more unified way 🙌#essereFerrari 🔴 pic.twitter.com/eZnry6XwY3

Introducing @ZakOSullivan to the Williams Racing esports lounge ahead of his first upcoming #esports event with the Williams Esports team. We look forward to seeing him in our virtual world of #motorsport. pic.twitter.com/RmAZ1Ylj97

Have missed being back home in Thailand, can’t wait to show you all what went on! 😆👌 Recharged and ready for Australia 🔋🦘 pic.twitter.com/2TVrxAFfhO

"Audi has raised its offer to gain a foothold in British supercar maker McLaren to 650 million euros ($718 million) from 450 million euros, according to Automotive News Europe's sister publication Automobilwoche. Audi wants to first take a stake in McLaren’s Formula One unit before possibly investing in the brand as a second step."

"A person in his position not having enough support and then too much interference. Like, that I didn’t like. Watching Saudi, the race before that, all this arguing during a race. It also doesn’t look professional. It all got a little bit messy."

Heikki Kovalainen: "Since (Alonso’s) championship years with Renault he’s always made the wrong move and just sometimes I wonder if the trigger was the surprise of Hamilton’s speed."

"The three-star accreditation recognises that McLaren Racing is operating at the highest level of the framework, demonstrating best practice and a commitment to seek continual improvement through the implementation of an environmental management system."

"Yes, of course, if there is a good opportunity, definitely I'm up for it (a full-time return to F1). Now having been away and having done Bahrain, the rush of qualifying, the excitement of the race, the battling on Lap 1, there is a lot of great things that happen in Formula 1, and it's a lot of fun."

"World Touring Melbourne – part-owned by Hollywood actor Will Smith – is alleging the cancellation was a breach of the Australian Grand Prix Corporation’s obligations. The touring agency is seeking $7.594 million for costs it incurred, another $1.128 million in lost profits, and interest."

"This is what’s been in the works these past 362 days, 4 hours and 6 minutes. My new wine drop, the DR3 II and Ricciardo Decanter."

The announcement of a fourth DRS zone at Albert Park this weekend has received a cynical response from many, but @kaiie thinks it could make for an eventful grand prix…

Trying to be positive here: correct me if I’m wrong, but Albert Park has been notoriously bad for overtaking. Passing here requires something special. Especially the run into turn one is too short (both the straight and the braking phase), and with the previous cars it required nailing the first chicane to have any chance of overtaking into turn three (and usually something else, like massive tyre difference). And the back section of the track: no overtaking.

With the addition of the fourth zone, I’d expect these cars to be able to pass both into turn three and into turn 13. And if the first two races of the season set the scene, we might see some passing and repassing this weekend: someone passes you into turn three? No worries, you can follow through the next few corners, get DRS, gain some slipstream, manage to stay close through the fast chicane, and repass them into turn 13. Rinse and repeat. Artificial? Maybe. Fun? Sure.
@kaiie