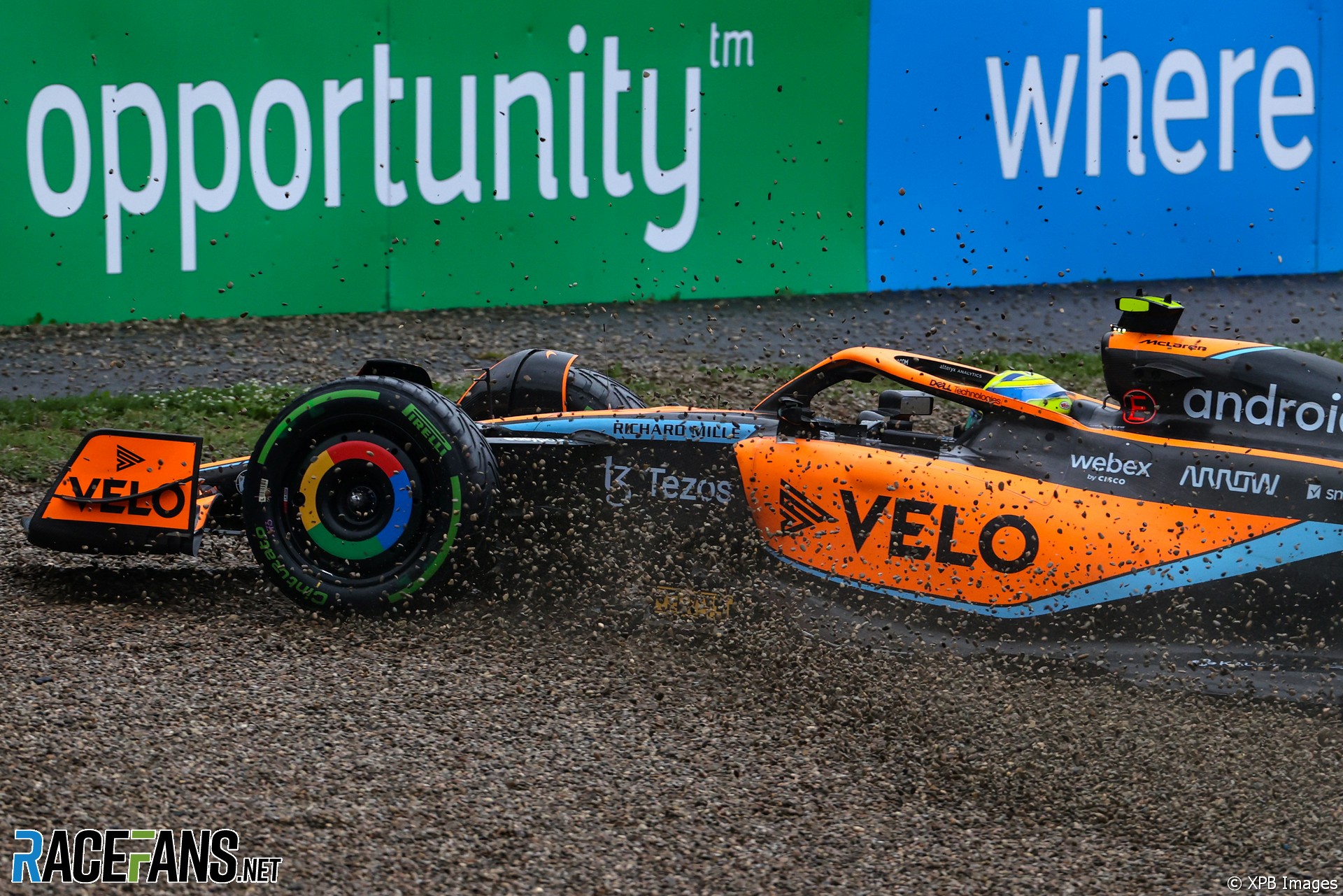 Last weekend’s Emilia-Romagna Grand Prix was the first sprint weekend of the 2022 Formula 1 season, seeing qualifying take place on Friday evening rather than the traditional Saturday.

However, rather than those responsible for triggering the red flag stoppages having their qualifying ruined by being the cause of a red flag, multiple drivers appeared to benefit from halting the session due to their own mistakes.

Carlos Sainz Jnr’s crash at the second Rivazza in Q2 may have put a stop to his qualifying, but it also effectively ended the entire second segment of the session as the rain began to fall during the subsequent red flag period that followed. With Sainz sitting second in the times when he spun, he effectively guaranteed his progression into Q3 and a starting position for the sprint race of at least tenth, while dooming those outside the top ten at the time to be eliminated.

In Q3, Sergio Perez and Charles Leclerc were in the middle of what should have been their first timed laps of the final session when Kevin Magnussen slid off the track at Acque Minerali, causing the session to be stopped. However, Magnussen managed to avoid being beached in the gravel and pulled his car onto an access road at the end of the gravel trap, turning his car around before returning safely to the pits under the red flag. He would eventually rejoin the session and qualify fourth.

In the closing minutes of Q3 after another red flag for Valtteri Bottas stopping on circuit with an exhaust problem, Lando Norris spun on his out lap at the same part of Acque Minerali that Magnussen had spun earlier, prompting the fifth and final red flag that effectively ended qualifying. But with Norris in a provisional third place before the session had been restarted, his error meant he had effectively secured himself third on the grid for the sprint race.

The results of the heavily disrupted session led to heavy discussion among fans on social media, with many arguing that there should be penalties to prevent drivers from causing red flags in qualifying without any disadvantage, when the laps of all other drivers on the circuit are affected by them.

The example of Charles Leclerc taking pole position for his home grand prix in Monaco in 2021 after crashing at the exit of the Swimming Pool also stands out as a case of a driver’s mistake actually benefiting them by denying their rivals a chance to beat their previous times.

In IndyCar, however, a very different approach is taken to red flags that occur during qualifying compared to that used in Formula 1.

In the 2022 IndyCar Series rulebook, rule 8.3.4 states that “if a car causes a Red Condition [red flag] in any segment, the car’s best two timed laps of the segment shall be disallowed.” The rule also states that a driver who causes a red flag in a qualifying session cannot continue in the session and also may not be allowed to advance to the next stage of qualifying should their times be fast enough after their best two times are deleted.

So should Formula 1 consider emulating IndyCar in its approach to red flags in qualifying by deleting the two best lap times of drivers responsible for sessions being suspended?

The Norris incident at the end of Q3 in Imola is possibly the greatest example that could be used to argue for the introduction. By bringing out a red flag by spinning on his out lap, Norris prevented any of his rivals from being able to improve their times at the end of Q3 – not only denying Charles Leclerc an opportunity to challenge for pole position, but preventing anyone from taking his third position away.

Drivers in Formula 1 should not be rewarded for mistakes – especially not during the ultimate test of speed that is qualifying. By deleting the two best lap times for any driver deemed responsible for causing a red flag in a qualifying session, F1 would help to ensure that there are no ways to benefit from making a major mistake, or, even worse, exploiting the rules by deliberately trying to create a stoppage.

The most important thing about red flags in any session is safety. A red flag should be called to ensure that any hazard on the race track can be dealt with promptly and safely without asking marshals to go out onto a live race track during the point where drivers will be at their fastest all weekend. If a driver is able to get going again after a spin or crash and rejoin a session, they should not be prevented from doing so as that in itself is an achievement.

There’s also the fact that in qualifying, drivers get 18, 15 and then 12 minutes in which to secure their place in the next session and their grid position. If a driver causes a red flag in the final moments of a session and prevents rivals from beating them, they likely had plenty of time prior to the stoppage to have set the quickest lap time they could instead of at the very end of a session.

What seems to be a very easy and simple solution to a problem perhaps needs a bit more thought before it’s applied to Formula 1.

While cancelling lap times of drivers who cause red flags with ensure no one who crashes in qualifying will benefit from it, it also does not provide drivers who have had to abandon laps due to red flags with their laps back or with the session time lost as a result.

There’s also the question of whether the risk of losing two best lap times in a session will be too much of a deterrent in qualifying – especially with all the barrier-lined street circuits on the current calendar. Will drivers truly give 100% in those last-gasp Q3 laps in places like Monaco or Baku, where just a slight misjudgement can see them into the barriers and losing not just a chance at pole position, but their two best times too?

There’s certainly an argument to make that by taking away drivers’ best laps when they cause red flags, any risk of drivers trying to manipulate results in their favour by causing any deliberate hazards on the track.

Finally, there’s also the possibility that a driver will lose a well-earned position in qualifying due to a mechanical problem with their car causing a red flag through not fault of the driver – such as Alex Albon’s exploding brakes in Imola.

There is definitely a discussion to be had about preventing drivers from crashing their way to success in qualifying, but maybe a compromise solution would be better than adopting the current IndyCar rule like-for-like.