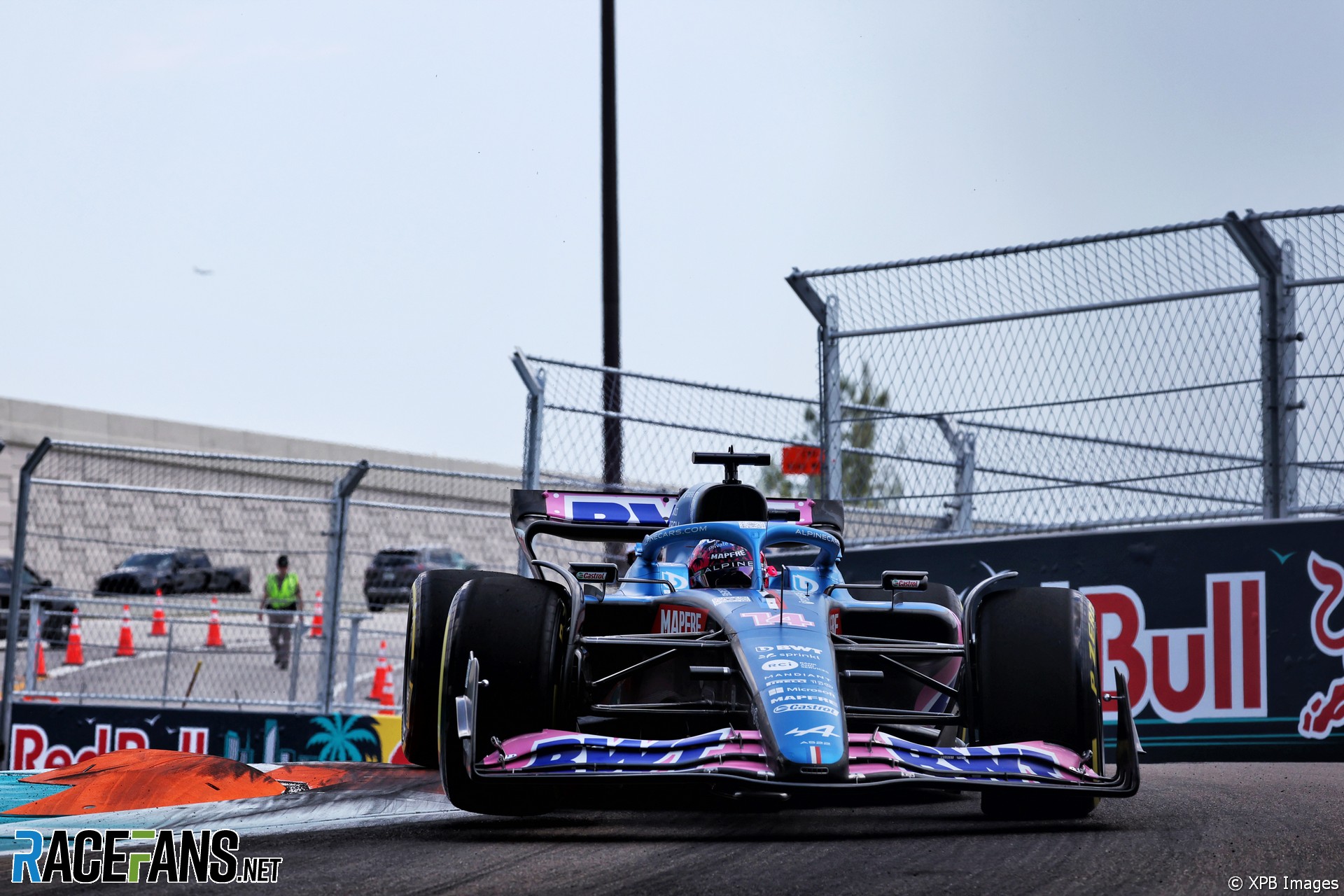 Fernando Alonso was hit with a pair of five-second time penalties in the Miami Grand Prix. One was for a collision with Pierre Gasly but the other, gaining an advantage by cutting the turn 15 chicane, left his team particularly aggrieved.

The Alpine driver was investigated twice for missing the turn 14 and 15 chicane in the middle sector on laps 53 and lap 56. Alonso was found guilty of infringing the rules on the first occasion but not the second.

Having already lost one place due to his sanction for the Gasly incident, the further penalty dropped Alonso out of the points completely, leaving him 11th in the final classification, a tenth of a second behind Lance Stroll.

Alpine were especially unhappy about Alonso’s second penalty. Were the stewards right to give it? Or should he have been penalised again for his later corner cut?

On lap 53 after the Safety Car restart, Alonso was in eighth position, two seconds behind Valtteri Bottas and less than a second ahead of Mick Schumacher. The Haas driver had been within DRS range of Alonso’s Alpine over the previous nine consecutive DRS zones the pair had driven through, but Schumacher had been unable to attempt a pass in that time.

Entering the tight middle sector, Alonso was 2.8 seconds adrift of Bottas ahead and his advantage over Schumacher was just under half a second (0.476s). Alonso missed the entry to the chicane and took to the inside run off, cutting turn 15 entirely.

Alonso rejoined the circuit and as he entered the long back straight, he held his hand out of the cockpit in a gesture of acknowledgement that he had left the track. He also audibly lifted off the throttle twice along the straight in an attempt to give up time gained by missing the chicane, but only did so after crossing the second DRS detection line. Despite backing off, he had gained 1.4 seconds on Bottas ahead, while Schumacher was now out of DRS range and over 1.2 seconds behind. Alonso’s lap time of a 1’33.331 for lap 53 would prove his personal best from the race.

Without DRS from Alonso ahead, Schumacher became vulnerable to Alonso’s team mate Esteban Ocon behind. Ocon attacked Schumacher at the turn 17 hairpin at the end of the straight, leading to a chain of events that resulted in the collision between Schumacher and Sebastian Vettel.

When Alonso turned in for the chicane, his left-front wheel appeared to lock, with smoke visibly rising from his tyre. Despite keeping the wheel turned towards the apex, Alonso’s car understeered and he took to the escape road again, raising his hand in acknowledgement once again.

By the end of the back straight, Alonso’s gap to Bottas was back to 1.6s, while his advantage over Ocon sat at 2.3 seconds. Alonso’s lap time of a 1’33.344 was a tenth faster than his previous two laps.

Alonso completed the final lap of the race and finished ahead of Alpine team mate Ocon in eighth at the chequered flag. However, a five second time penalty he had received for colliding with Pierre Gasly before the Safety Car meant he dropped down to ninth in the provisional classification.

After cutting the chicane for the first time on lap 53, Alonso claimed over team radio that he had surrendered any advantage he had gained missing turn 15 by backing off. “I missed turn 14 but I lifted off next straight,” Alonso said.

Following his second trip across the escape road on lap 56, Alonso reported to be struggling with his brakes. “Yeah, the brakes are locking,” he reported.

Having received his second penalty after speaking with the media following the race, Alonso has not commented publicly on the incidents.

After investigation Alonso’s first incident on lap 53, the race stewards determined that Alonso had breached the regulations by gaining a lasting advantage from leaving the track.

“The stewards reviewed the video evidence and determined that car 14 [Alonso] left the track at turn 14 and gained a lasting advantage,” the stewards said in their decision. There was no clarification for what rationale had been used to determine how Alonso had gained a “lasting advantage”.

The stewards handed Alonso a five second time penalty and one penalty point on his superlicence for the incident. The penalty dropped Alonso out of the points in the final classification, promoting Alex Albon to ninth and Lance Stroll to the final points position in tenth.

On Wednesday after the race, Alpine released a statement from CEO Laurent Rossi, expressing the team’s view that the penalty was unjustified.

“This one is certainly difficult to accept since Fernando handed back the time during the lap and we were not able to present the evidence to clarify the particular situation before the penalty was issued,” Rossi’s statement read.

“With the opportunity to explain, we’re very confident Fernando would have kept his ninth place.”

Following an investigation into the second instance of Alonso cutting the chicane on the penultimate lap, the stewards decided no further action was necessary.

In their decision, the stewards explained that they had “reviewed the video and GPS data evidence and determined that although the driver of car 14 [Alonso] left the track and rejoined, the time difference to the two following cars [Ocon and Albon] remained unchanged, thus the Stewards concluded that no lasting advantage was gained.

Was Alonso’s penalty justified? Should he have been penalised for both incidents, or neither? Cast your vote below and have your say in the comments.

Do you agree that the stewards handled Alonso's chicane incidents correctly?

21 comments on “Did the stewards handle Alonso’s chicane cutting incidents in Miami correctly?”