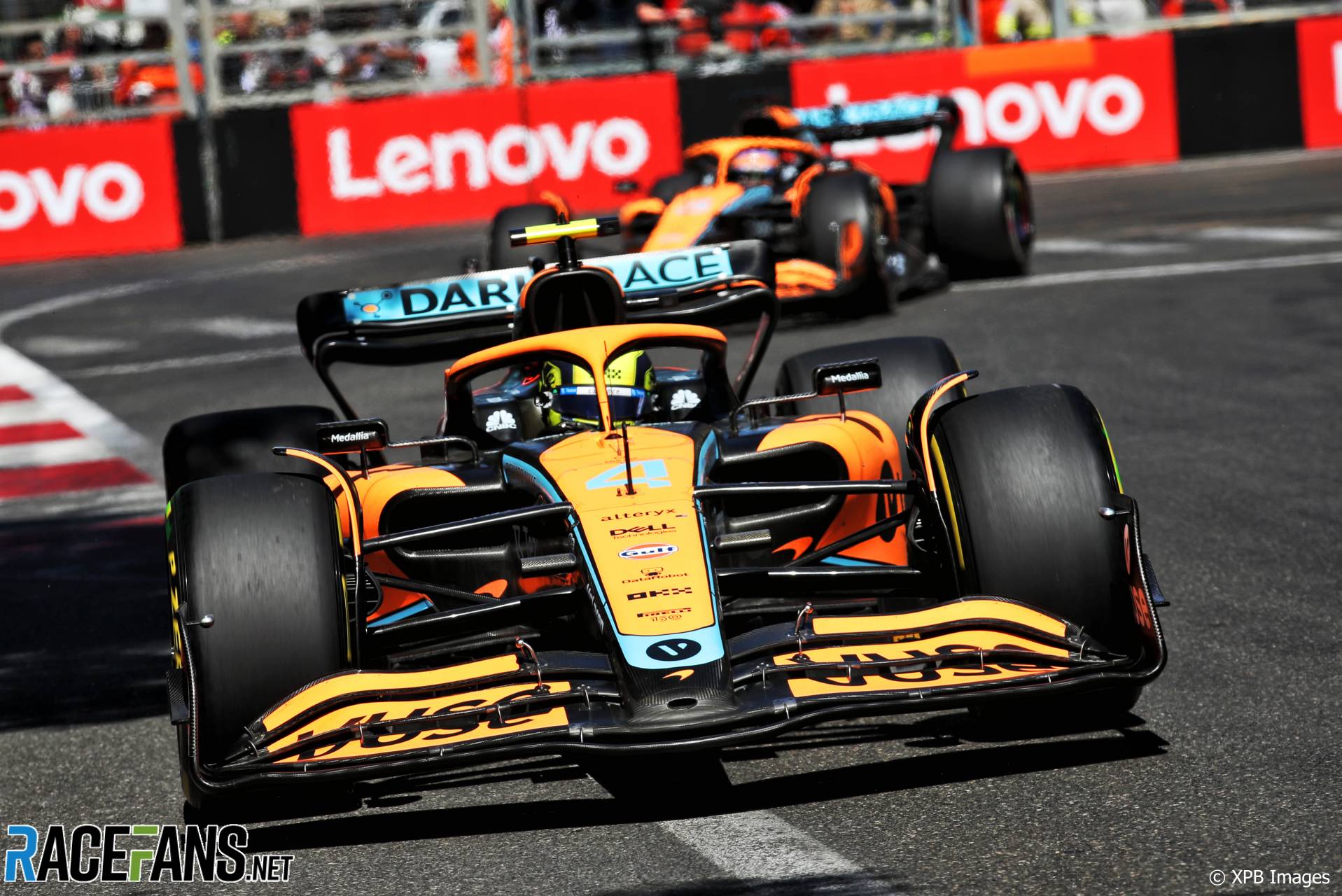 Drivers are seldom satisfied at being told to stay behind their team mates, particularly in the final laps of a race when there are points on the line.

That was the case when Lando Norris to ordered to hold position by McLaren with three laps to go on Sunday.

When it was pointed out to him that his team mate Daniel Ricciardo had done the same for him earlier in the race, Norris objected. “But that was for the strategy,” he said. “This is for the finishing position.”

Nonetheless, despite showing his team mate the nose of his car going into turn one, Norris complied. But speaking to media after the race it was clear Norris was disappointed he’d been told to follow Ricciardo home, partly because his team mate had benefited from the timing of a Virtual Safety Car period later in the race.

However it was also clear, as is often the case in these situations, that Norris didn’t have the full picture about exactly how the team had made its decision, after Ricciardo followed him for much of the first stint while the pair pursued Fernando Alonso.

Norris stressed he was happy to follow the team’s instructions, but felt he should have had the opportunity to race his team mate.

“I think just racing for a normal position at the end, he wasn’t there or behind me or whatever in a different position because of what we did earlier in the race. We thought that would help me it, but it didn’t. Therefore, at the end of the race, there was nothing to gain or lose between us.

“It was just, it’s a race. It’s nothing I’m complaining of or I’m angry about it. I wanted to overtake and I wanted to race and that’s what I said on the radio. But I listen to what the teams says.”

Here’s everything the team said to both its drivers during the race:

The McLaren drivers occupied the sixth row of the grid, Norris on medium tyres ahead of Ricciardo on hards. The pair kept their positions at the start, Norris unable to pass Alonso due to the Alpine’s strong traction out of the slow speed corners and speed on the straights due to its lower wing level.

Norris wasn’t able to get within DRS range of Alonso, and Ricciardo found good initial pace on his harder rubber, so he was immediately on his team mate’s tail. McLaren therefore told Ricciardo as early as lap four not to try to pass the team’s other car. Norris was also told the same.

The pair were told to extend their advantage over Ocon. The Alpine driver was dropping back from Ricciardo, who pointed out to McLaren he was capable of lapping more quickly:

The team could have brought Norris in for an attacking one-stop strategy, switching to hard tyres as Charles Leclerc did. But a message from Norris’s race engineer Will Joseph indicates why they ruled that out:

Following the VSC period Norris edged further away from Ricciardo, who was being given feedback on how to improve his driving style:

McLaren told Norris they were considering pitting him to attack Alonso, whose lap times were dropping. However Alpine brought Alonso in on lap 18 and the opportunity for McLaren to ‘undercut’ him was gone:

McLaren didn’t keep Norris out much longer. He came in two laps after Alonso but fell six seconds behind the Alpine.

Meanwhile Ricciardo had closed right up to his tyre-troubled team mate again. He told McLaren he was capable of going quicker and was concerned about being passed by Gasly:

Gasly immediately slipped by Ricciardo and drew away from him. Hamilton also caught and passed the McLaren:

Having come out of the pits on fresh tyres, Norris picked off Alexander Albon, Lance Stroll and Valtteri Bottas in quick succession. Soon he was close enough to Ricciardo that his team mate would fall behind him when he pitted, unless a VSC or Safety Car period occured:

On lap 33 Ricciardo got the break he needed. Kevin Magnussen’s Haas rolled to a stop, a VSC period was triggered, and he switched to medium tyres while staying in front of Norris:

Now Ricciardo was chasing Alonso, with Norris five-and-a-half seconds behind once the race resumed.

Although Ricciardo was on new tyres he dropped back from Alonso at first. After lap 40 he began to close in but Norris was getting closer behind. The McLaren pit wall discussed what to do.

At first McLaren decided to give Ricciardo a crack at Alonso, then let Norris have a go, and be prepared to reinstate the previous positions. This was explained to Norris, who was asked if he was happy with the decision, while Ricciardo was encourages to attack the Alpine:

While Ricciardo continued to apply pressure to Alonso, McLaren evidently decided the cause was lost, and elected not to swap their drivers after all:

Norris was therefore told to hold back:

Over the final laps Norris was all over Ricciardo, who had dropped out of DRS range of Alonso. The two McLarens crossed the line separated by just three-tenths of a second, Ricciardo ahead:

Both drivers were thanked for playing the team game on the victory lap:

Norris’s comments afterwards showed he had not been aware (or had forgotten) that Ricciardo had been told to stay behind him over a period of laps at the start.

“There was one lap, just before I boxed, that Daniel could have overtaken me and didn’t,” he said. “I think he was told just to defend to Gasly pretty much until I boxed.

“But I boxed the next lap, so there was one lap he stayed behind me and I guess the return favour for him just not overtaking me was for me not to overtake him.”

However, as the radio messages showed, Ricciardo was also told more than once at the beginning of the first stint to stay behind his team mate.

McLaren’s strategy did not work out well for Norris. An earlier first pit stop could have got him ahead of Alonso, and missing the opportunity to pit under the first VSC played into Ricciardo’s hands during the later period.

It was clear Norris was the quicker of the two, as his pursuit of Ricciardo over the final laps showed. “I could have [passed him], I was alongside into turn one and it was a tough decision whether to really choose or not. But I went with what we decided as a team and I stuck with that.

“So it’s tough, he just had the luck of the VSC pit stop and he came out on the medium at the end. I just would have thought he had a bit more pace and could attack Fernando much better. But my pace on the hard was quite a bit stronger.

“So I could have done but as a team I think we just did a good job today. We did what we wanted, which was to finish in the points.”

McLaren have used similar orders in the past, notably last year when Ricciardo was told to let Norris by at Imola. These situations are always likely to leave one driver frustrated, though McLaren communicated the situation clearly to both of them.

How accurately that comes across in the next series of Drive to Survive is another matter.