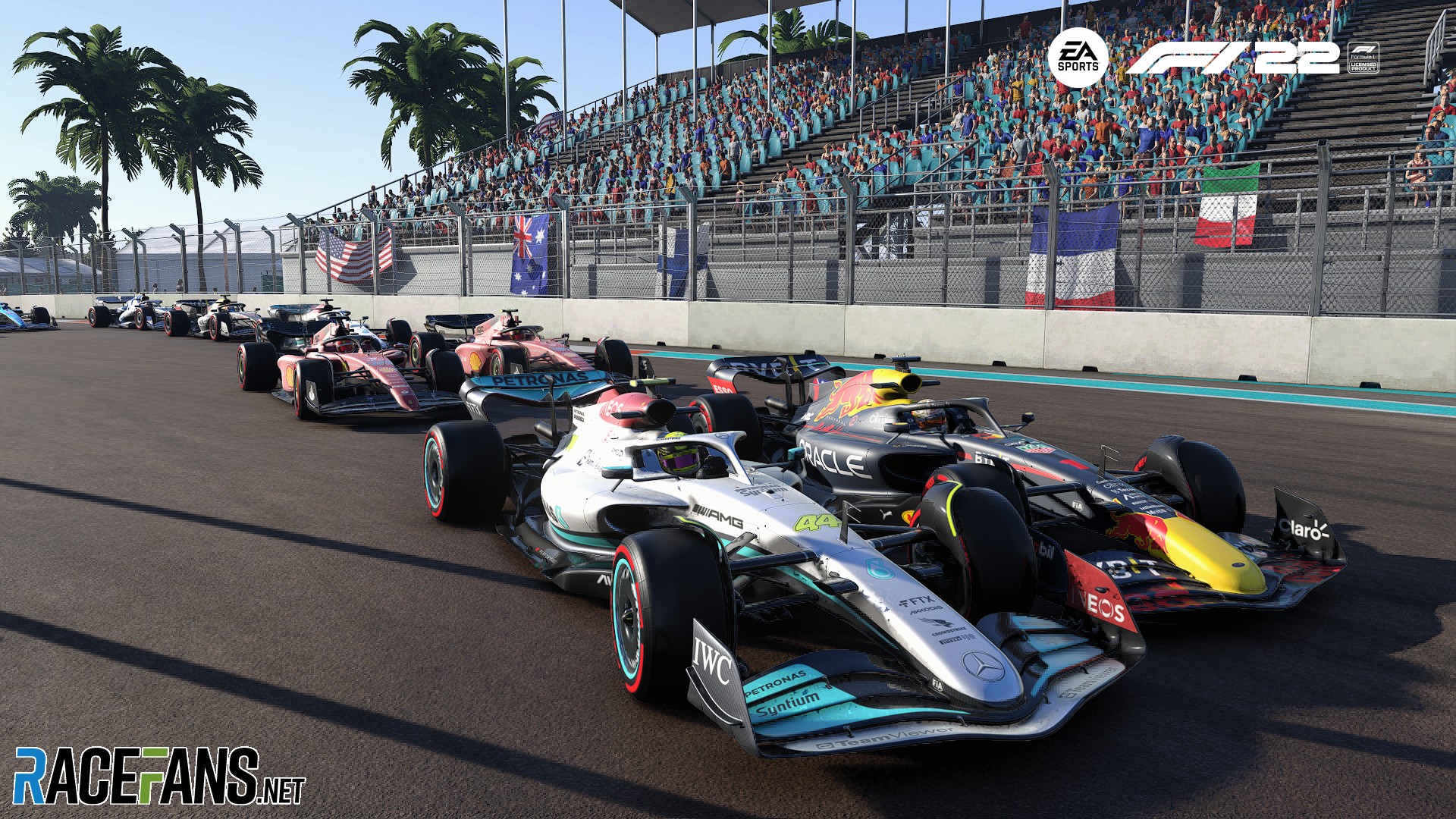 The 2022 season has marked a bold new era for Formula 1, with overhauled regulations aiming to revolutionise racing and make the sport more exciting than ever before.

RaceFans readers will not need reminding of how the new technical rules for 2022 have transformed Formula 1 cars for this year, with their ground effect downforce-generating floors and sleeker, sculpted bodies designed to allow cars to run more closely than before.

So with EA Sports promising that players can ‘enter the new era’ with Codemasters’ latest officially licensed game – F1 22 – has the virtual world of Formula 1 received as much of a shake-up as real life this season?

Firing up the game for the first time and taking one of the 10 all-new cars to the track for the first time, it’s clear to see that, yes, the new 2022-spec F1 machine really do feel different compared to their predecessors.

When it comes to physics and handling, you’ll notice the heavier weight of the 2022 cars immediately – especially if you’re a veteran player of the series. More mass means more momentum. You feel how the car’s mass makes it want to continue on its trajectory into and out of corners, requiring a more deliberate approach rather than just being able to throw the car wildly about.

The stiffer suspension settings mean handling feels more precise and responsive in a lot of ways – especially at turn-in – which could be a blessing or a curse depending on your driving style. You have to take care over kerbs due to how low you’re running to the ground as it’s a lot easier to bottom out and dragged along off track as a result.

That’s not to say that experienced players will have a hard time adjusting to the new handling model – you’ll get to grips with it soon enough. But you also cannot just expect to apply your same approaches to corners in F1 22 as you did in F1 2021 – especially on the throttle on corner exit, as it’s now easier to break traction and skid off under power.

Car set-ups have also been expanded slightly with the new cars. Now, rather than having front and rear wing angles limited to only ten increments within a pre-set for each track, players are now able to set downforce levels across the full 50-point range, allowing you to run Monza-level wing settings in Barcelona, should you want to.

As we’ve only been able to review the game on PlayStation so far, we can’t assess one of the most exciting new additions to the game – virtual reality. Anyone who has been lucky enough to experience a racing game in VR knows just how transformative an experience it can be, adding a whole level of immersion to driving that racing ‘flat’ can never hope to emulate. For this year, PC VR players can play every driving mode in the game in VR. With PS VR2 on the horizon, hopefully that will not just be luxury only PC players will get to enjoy in years to come.

Aside from VR functionality, the biggest new feature for this year is ‘F1 Life’, which supposedly offers players the chance to live out their F1 driver fantasies with a customisable hub where they can show off their trophies and deck out their driver avatars in designer clothing and accessories.

If ‘F1 Life’ sounds like a superficial addition to the game designed as much as an excuse to sell more PitCoins then, sadly, that’s exactly how it feels. It’s all so easily ignorable. After deciding how to decorate the various rooms of your driver’s apartment, you will only see them if you go out of your way to look for them. There are hundreds of shirts and trousers and trainers you can spend your PitCoins on, but then your avatar will only ever be sitting around in them, making you question why you ever worried about how you wanted them to look in the first place.

You can’t walk around the hub in game or do any kind of interaction with anything – it’s purely window dressing. Even if you’re a true streetwear enthusiast or a particularly big fan of the Anti Social Social Club, it’s still hard to see many reasons to want to spend real world money on virtual currency just to dress up what will remain effectively a static model.

The only thing of real substance to come out of F1 Life are the supercars – real world models of Ferraris, Mercedes, Aston Martins and McLarens that you can unlock and drive. From the Ferrari Roma to the McLaren Artura and the Mercedes AMG GT R Pro, you can drive a total of eight supercars – and the two official Safety Cars if you buy the Champions Edition – around all of the circuits available in the game on Time Trial mode. As you progress through the game, you earn tokens which you can spend to unlock any one of the available cars of your choice.

You can take part in a variety of sub-games with the supercars, including checkpoint challenges, duels against AI opponents, and drift contests. The supercars handle as forgivingly as you would expect – this is not Assetto Corsa. It’s certainly novel and a quite literal change of pace from the Formula 1 cars, but much like last year’s Braking Point story mode, it’s hard to see many players engaging with the supercars side of F1 22 beyond dabbling with it beyond their first week with the game.

Thankfully, F1 Life is not the only thing that’s different about this year’s entry to the franchise. Presentation has received a great deal of attention, with a range of new animations and cutscenes to refresh many of the same old pre- and post-race sequences that players have seen for years. New ‘broadcast’ settings for formation laps, pit stops and Safety Car periods allow players to sit back and enjoy those periods play out through AI controlled TV style sequences, rather than doing it themselves.

Commentary comes from David Croft as ever, but players of the English-language game now have an alternative in the shape of Channel 4’s Alex Jacques to commentate over the F1 action as well as the 2021 Formula 2 championship in game. Anthony Davidson continues to provide analytical input at the end of races and it’s also good to hear Sky F1 reporter Natalie Pinkham step into the role occasionally, adding some much-needed female representation to the game.

Former McLaren mechanic and television presenter Marc Priestley has been brought in to replace ‘Jeff’ as the player’s race engineer over team radio. While Priestley has certainly provided a genuine effort in taking over the role, the way he has been implemented feels a little underwhelming. Not only does Priestley repeat verbatim many of the exact same lines that Jeff had spoken to players for years, his inflection and tone of voice means he sounds very much like someone reading lines off a script. It’s more a criticism of voice direction than of the performer himself, but one which stands out now we’ve heard how race engineer audio is rendered in the upcoming F1 Manager 22.

The major single-player career modes of MyTeam and driver career are still here and function still almost identically to F1 2021 and F1 2020 before them. MyTeam does have the welcome option of allowing you to choose from three levels of entry for your team, meaning you can either start off as a backmarker with very limited money and resources, join as a midfield team scoring points from the beginning or even hop straight into contention for race wins from your debut race. Other than slightly expanded department dilemmas, everything else with MyTeam and career will feel very familiar to the last two games.

On-track, a few small details are intended to add more immersion to the racing. Players can now drive themselves freely to their grid slot at the end of the formation lap rather than the AI taking over prior to the pit lane entrance. And, while there’s still no full control over cars in the pit lane itself, players do now have to manually time their turn into their pit box, and mis-timed turnings can result in slower stops.

After years of complaints about inconsistencies in the AI’s performance between circuits and players struggling to find the right balance for them in single player mode, the announcement of a new ‘adaptive AI’ system was one of the more interesting aspects of the new title. Disappointingly, adaptive AI does not actually allow you a way to tailor your single-player experience to suit your skills. Instead, it’s limited to the ‘casual’ game mode designed for new, inexperienced or younger players.

On one hand, implementing adaptive AI as an accessibility aid is something to be applauded. Not only will the game change AI level between races to try and keep players in the thick of the action as they get more comfortable, but there is also a setting that amounts to a ‘rubberbanding’ option where the AI will actively slow down and wait for the player to catch up after a spin or an off. However, it also means it will be completely irrelevant for the vast majority of players who will race in standard or expert modes and will have to continue having to manually fiddle with their AI levels to try and find the perfect sweet spot for them at each circuit.

When it comes to graphics, audio, AI and general overall impact of F1 22, it’s difficult to try and find things to say that haven’t already been said about the game’s predecessors before it, given how fundamentally similar this new title is. New audio mixing options are certainly welcome and the AI does seem to be more prone to making mistakes if a player can put them under sustained pressure, but anyone who has already put hundreds of hours into F1 2021 and F1 2020 will see F1 22 as something that quickly feels very similar to those games after the novelty of the new cutscenes and handling have worn off.

Thankfully there’s more than enough fun to be had from racing that makes F1 22 just as rewarding to play and enjoy as the series always has been – and even more so in VR. The new Miami International Autodrome track is present and correct, and the updates to Melbourne, Yas and others are there too. But anyone who was hoping that the revolution of rules for 2022 might lead to a revolutionary new entry into the F1 game will likely be left disappointed.

For the last two years, there’s always been a sense that the next F1 game could be the major step forward that long-time fans have been eagerly hoping for, but even as the second release into the current generation of consoles, that leap forward hasn’t quite come yet. Maybe if industry rumours of a new game engine for 2023 prove correct, the future of the F1 game franchise might become a lot more exciting.