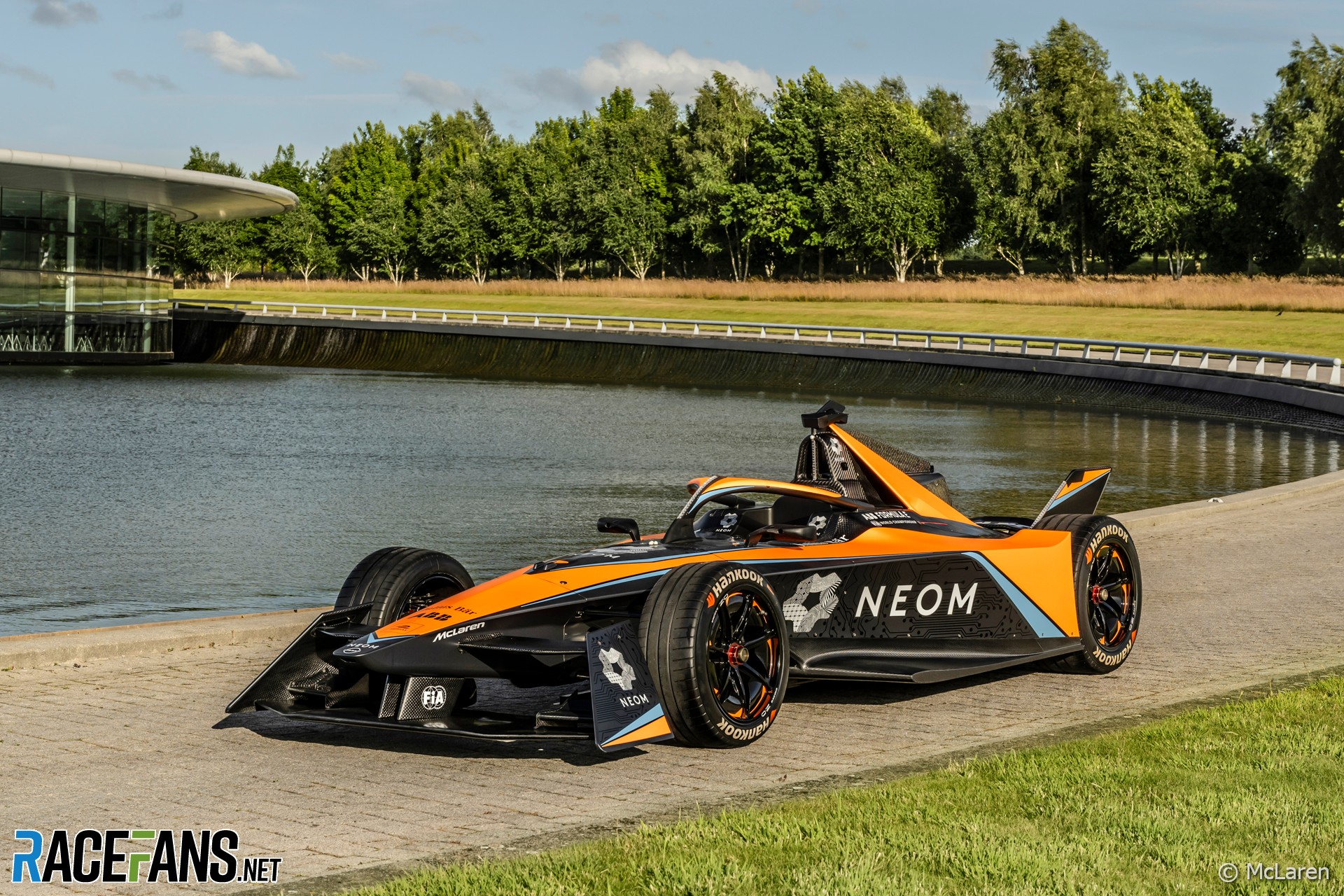 McLaren is taking over Mercedes’ factory Formula E team, along with all its staff, and expects it to stay at the top.

Mercedes announced its planned departure from Formula E after just two seasons in the category, despite its rapid success. It won the teams’ title in its second year (the first time Formula E awarded a ‘world’ championship) while the Silver Arrows’ Nyck de Vries won the drivers’ trophy. It’s in the thick of the fight again this season, De Vries and team mate Stoffel Vandoorne having already taken wins.

The team originally entered the 2018-19 championship as HWA (Mercedes’ customer DTM team). Now, Mercedes have chosen to leave Formula E, rather than commit to the Gen3 era, details of which were still largely unconfirmed at the time.

Nonetheless it was keen to find a buyer for the team. One soon materialised in the shape of McLaren, which signed a deal to take it over shortly before this year’s Berlin Eprix.

Speaking at the launch of McLaren Racing’s new EV racing edition, including Formula E and Extreme E teams, CEO Zak Brown explained to media including RaceFans how the takeover will work, and why they won’t immediately relocate the team to the McLaren Technology Centre, home to its F1 team.

“We’re going to pick up literally the Mercedes Formula E team, move it to a new location but in the same general vicinity,” he said. “So in the short-term, they’re not going to move to the MTC. That’s to give good integration to the existing team and not pick them up, move them all.”

“All EV racing will be led by Ian James, so Extreme E will then roll into what is now McLaren EV racing, he’ll be the [managing director] of that. So it will be the existing Extreme E team, existing Formula E team with Ian’s leadership across both.”

Entering Formula E as a new team can be extremely challenging. Ownership transitions like this, such as when Audi took over (their customer DTM team) ABT’s entry in 2017, can set things off-course in the delicate and very operationally-dependent ecosystem of FE.

However, Brown said he expected the team – having been taken wholesale from as it was as Mercedes – to be able to be competitive from the off. “From an on-track point of view I see no reason why the Formula E team can’t compete for the championship in year one.

“While we as McLaren are new to it, Ian and the entire team are not, so our expectations are to be able to compete for the championship.”

McLaren showed off its Gen3 chassis at the event. “Obviously there’s a new generation of cars,so everyone’s going to have a bit of a reset,” Brown acknowledged. “But I don’t see any reason why our team won’t have all the resources it needs to compete for a championship.”

FE’s new generation of cars will have a significantly increased power output, up to 350kW from a rear motor-generator unit and come with enormous energy recovery capacity, with a combined 600kW potential from the front and rear axle motors.

Brown said the progress in the series’ technology is part of what made it attractive to enter now. “I think it’s definitely entering a new era. It’s great to see the technology continue to develop.

“These cars are going to be substantially faster than the previous. I think we all remember when it got started you had to change cars, I think that the stigma of battery technology going back 10 years was range anxiety. And when Formula E came on board, to have to change cars not recharge or refuel, I think showed where battery technology was then. Then you got rid of the second car, now you’re going to a lot more power output.

“I was at Goodwood, I would suggest you have a look at the car that broke the record, if anyone thought you couldn’t get batteries to go fast… You should see this thing, it was pretty out of control,” he continued, referring to the McMurtry Spéirling battery-electric single seater, which uses a fan to create immense downforce.

“I think battery technology, just like our mobile phones, will continue to evolve, range will get longer, power will be greater, cooling will get better. And I think Formula E is the motorsport platform that’s going to develop that that battery technology and it is doing so as we speak.”

As the team that McLaren is buying is already in place, it’s not a way to repurpose existing staff for the F1 budget cap, as some other teams have done by branching out into additional series.

However Brown believes there is some potential for knowledge transfer between the operations in terms of “people training, ways of working, operational expertise where there are similarities in technology development.”

“But it’s totally different racing,” he acknowledged. “This is a race car that we buy and a spec series, our power unit provider is Nissan. Whereas in Formula 1 we’re building the cars bespoke, totally different technology.

“So it’s more operational knowhow than it is similarities in technology development because of the restrictions that we have in Formula E.”

With both De Vries and Vandoorne moving on, the team is yet to confirm the identity of their replacements. However it has four IndyCar racers signed for next season and only three cars to put them in, so a return to Formula E for three-times winner Felix Rosenqvist seems to be on the cards.

McLaren’s new team will remain branded as Mercedes at this weekend’s double-header in New York and until the chequered flag falls on the Seoul Eprix on August 14th. Meanwhile, Nissan is beginning private powertrain testing with the Gen3 chassis.

Manufacturers can choose to share their pre-season private testing days with their customer teams. If McLaren don’t do that, their new Formula E outfit will hit the track for the first time at Valencia pre-season testing this October.