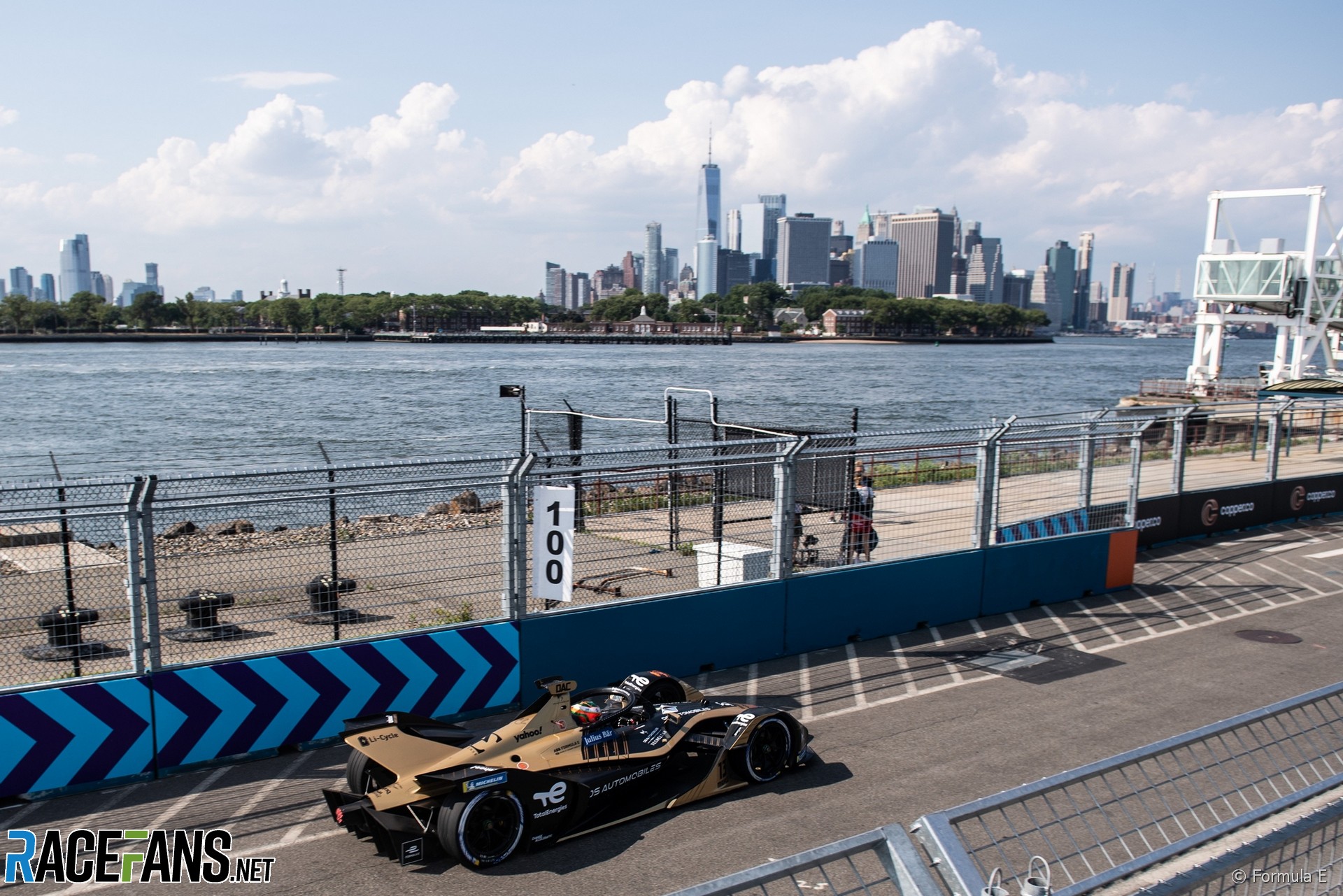 Da Costa secured his first win of the season by holding off Stoffel Vandoorne for the majority of the race, with Mitch Evans overtaking Alexander Sims in the closing laps to take the final podium position.

Saturday’s race winner Nick Cassidy had made it a clean sweep of pole positions in qualifying earlier in the day, however he was dropped to the back of the grid after he was hit with a 30-place grid penalty for using his fifth battery of the season – one more than the four permitted by the regulations.

That left Antonio Felix da Costa on pole with Alexander Sims alongside him on the front row and Andre Lotterer in third. But when the lights went out, Lotterer jumped the start and then stopped, eventually pulling off his grid while he was swamped by the front of the field, dropping down to ninth place. Da Costa easily held the lead from Sims in second and the two Mercedes of Stoffel Vandoorne and Nyck De Vries behind.

Despite a lock up into turn one in one of the early laps seeing him run wide, Da Costa continued to lead the initial phase of the race, with a train of cars following close behind him. Just under 15 minutes into the race, De Vries became the first of the front runners to take his one and only Attack Mode. De Vries held fourth, with Sergio Sette Camara also taking Attack Mode from sixth.

A mistake from De Vries at turn five before the long back straight give Mitch Evans a run and the Jaguar driver pulled alongside the Mercedes and passed to the inside of the left hander of turn six to claim fourth place.

After the leaders’ Attack Modes had expired, Vandoorne began pressuring Sims for second place, passing the Mahindra to move up a place into turn six. Behind, Evans tried to challenge De Vries for fourth along the back straight, but De Vries defended to the inside, causing Evans to bounce over a large bump on the circuit and almost lose control of his Jaguar. Somehow, Evans managed to avoid the walls and continue, not losing a position but dropping off the back of De Vries.

Da Costa continued to lead ahead of Vandoorne with Sims third. De Vries tried to pass Sims for third up the inside along the back straight, but hit the same bump he had pushed Evans over previously and crossed up his car trying to avoid the wall, dropping behind Evans to fifth. On the next lap, De Vries was then hit by Sam Bird on the same straight, dropping to sixth before losing another place to Robin Frijns.

With less than three minutes of race time remaining, Evans passed Sims to take third place. In the final minute, Lucas di Grassi and Jean-Eric Vergne appeared to collide at turn seven, leaving Di Grassi’s car suddenly blocking the track. Cars behind were forced to stop temporarily before Di Grassi righted his car and continued, clearing the blockage. Di Grassi, Vergne and Oliver Askew all stopped after apparently suffering damage in the collision.

As the track was cleared but still under local yellow flags, Da Costa managed to check off the final two laps and cross the line to claim his first victory of the 2022 season. Vandoorne was just under a second behind in second place, with Evans taking the final podium place in third.

Sims finished fourth, with Bird claiming fifth after starting from 16th on the grid. Frijns finished in sixth ahead of De Vries, with Jake Dennis, Lotterer and Edoardo Mortara completing the top ten.

Vandoorne retakes the championship lead with 155 points, ahead of Mortara now 11 points behind. Evans moves ahead of Vergne to take third place in the standings heading to London.