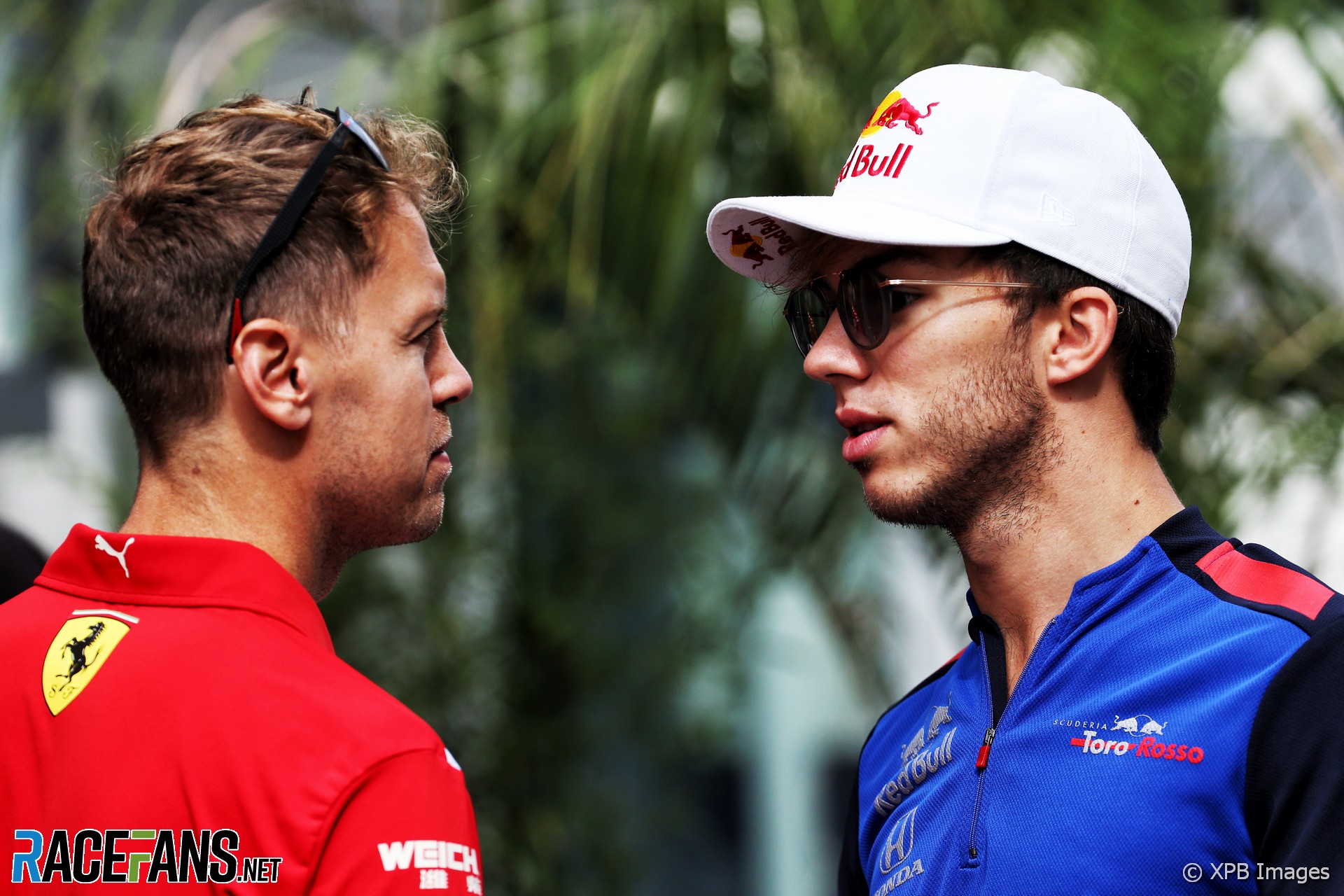 Pierre Gasly has revealed his gratitude for the help Sebastian Vettel offered when he was seeking an opportunity to race in Formula 1 six years ago.

He described Vettel, who has announced he will retire from F1 at the end of the year, as “a guy I’ve always had so much respect for.”

The pair were briefly together at Red Bull in 2014. Vettel was in his final season of driving for the team when Gasly, then racing in Formula Renault 3.5, was appointed to its junior squad.

“I had the chance, when I entered into the Red Bull programme, to get closer to him for his last season in Red Bull, see how much effort [he made], see his work ethic inside the team, his dedicated for the sport,” recalled Gasly.

Two years later he won the GP2 (now Formula 2) championship. But there were no seats available for Gasly in either of Red Bull’s two F1 teams. He asked Vettel, now a Ferrari driver, for his advice.

“I always remember when I won my GP2 title and I didn’t get promoted to Formula 1 straight away – I was in Singapore when this happened – I remember calling him one night and I just wanted like five minutes to get his opinion about it and get his view and try to get some advice on how to deal with the Red Bull situation.

“It turned out to be a one-and-a-half hour call. At the time it was like ‘you’re an F1 driver racing for Ferrari – in your list of priorities, I’m very, very low,’ but he still took 90 minutes to speak with me and advise me on how to cope with the situation, how to deal with Red Bull, gave me advice on how to make the situation progress.

“This I’ll always be very, very grateful for. Then after that, we always kind of kept quite a close relationship, had a couple of dinners together. I think he’s a fantastic driver, but also a great human being.”

Gasly eventually made his F1 debut with Toro Rosso (now AlphaTauri) later in 2017. He had an unsuccessful half-season at Red Bull in 2019, before returning to his previous team, which he continued to drive for.

In 2020 he scored his only F1 victory to date with a shock win in the Italian Grand Prix. Vettel “did call me after the race to congratulate me,” said Gasly.

“I think we always got on very well together. We have some, I will say, similar traits of character, not all of them, but some are similar and I think that’s why we do have a lot of respect for each other.”

F1 “will definitely miss him”, said Gasly. “First of all, he’s a legend of the sport. Just looking at the numbers – four world championships, the number of victories, pole positions.

“I also think he’s quite a loud personality and I think he’s a character inside the paddock. So definitely I feel everybody is going to miss him.”