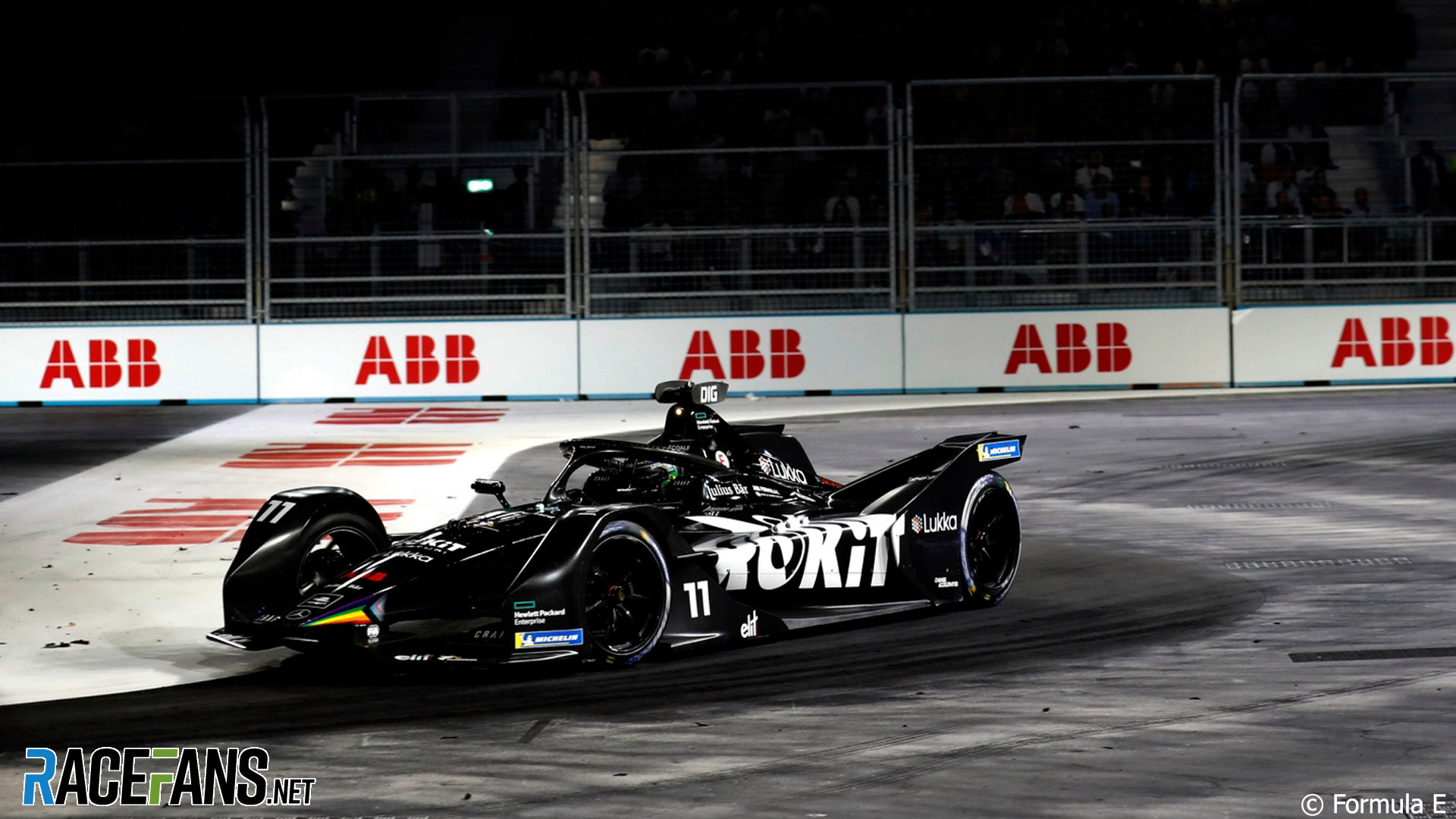 Dennis had taken another dominant pole position earlier in the day. Di Grassi started the race alongside him, with Antonio Giovinazzi and Antonio Felix Da Costa on the row behind.

Drivers were permitted three Attack Mode activations of four minutes each for the second race, one more than on Saturday, but ultimately the same amount of time.

The title protagonists had all failed to make the duels stage in qualifying. Jean-Eric Vergne qualified 10th with Mitch Evans and Stoffel Vandoorne shared row seven and Edoardo Mortara was down in 17th.

Vergne’s race ended on lap one with radiator damage. Oliver Askew and Oliver Rowland came together on the ramp section of the track and Rowland’s car briefly lifted itself on Askew’s, riding up on the wheel cover of the Andretti in an incident reminiscent of Alex Lynn’s Diriyah crash last year.

Fortunately, Rowland’s car did not launch but crashed back down to the track, breaking its suspension, Rowland limping back to the Mahindra pit. On the same lap Dan Ticktum retired with a visibly damaged car after hitting a barrier, knocking his right-front wheel onto its side.

The Safety Car was consequently called for while marshals cleared the circuit of debris and cars. The race restarted with just under 40 minutes remaining, Dennis holding the lead and Nyck de Vries taking the opportunity to activate Attack Mode and briefly move up to second.

Giovinazzi successfully defended third from Da Costa and looked like a podium contender until he was announced as being under investigation for over-use of power. He was given a drive-through penalty, sending him to the back of the field and ultimately retired in the pits.

Askew was also issued a drive-through penalty for the collision with Rowland, which also saw him retire. Nick Cassidy, who slowed behind the safety car with a mechanical issue, retired as well.

Dennis and Di Grassi fought through the middle phase of the race, Dennis losing the lead to Dennis briefly when he activated his second Attack Mode. Dennis was able to overtake Di Grassi but the Venturi driver stayed close with him and was able to avoid any threat from De Vries behind, as the Mercedes came under pressure from Mitch Evans.

When Dennis took his final Attack Mode, Di Grassi got ahead of Dennis again and this time was able to pull away, De Vries being close enough that Dennis had to defend from him more than attack Di Grassi. Di Grassi was able to continue to pull out a lead in the final laps, of more than three seconds by the race end.

Three minutes were added to the race time due to the Safety Car. Mitch Evans’ car then slowed at the chicane, then went off track. He crawled back to the pits, losing fourth place and handing it – and a 36-point title lead – to Stoffel Vandoorne.

It is Di Grassi’s first win for Venturi, his 13th in Formula E, bringing him even with Sebastien Buemi for the most career victories in the series.