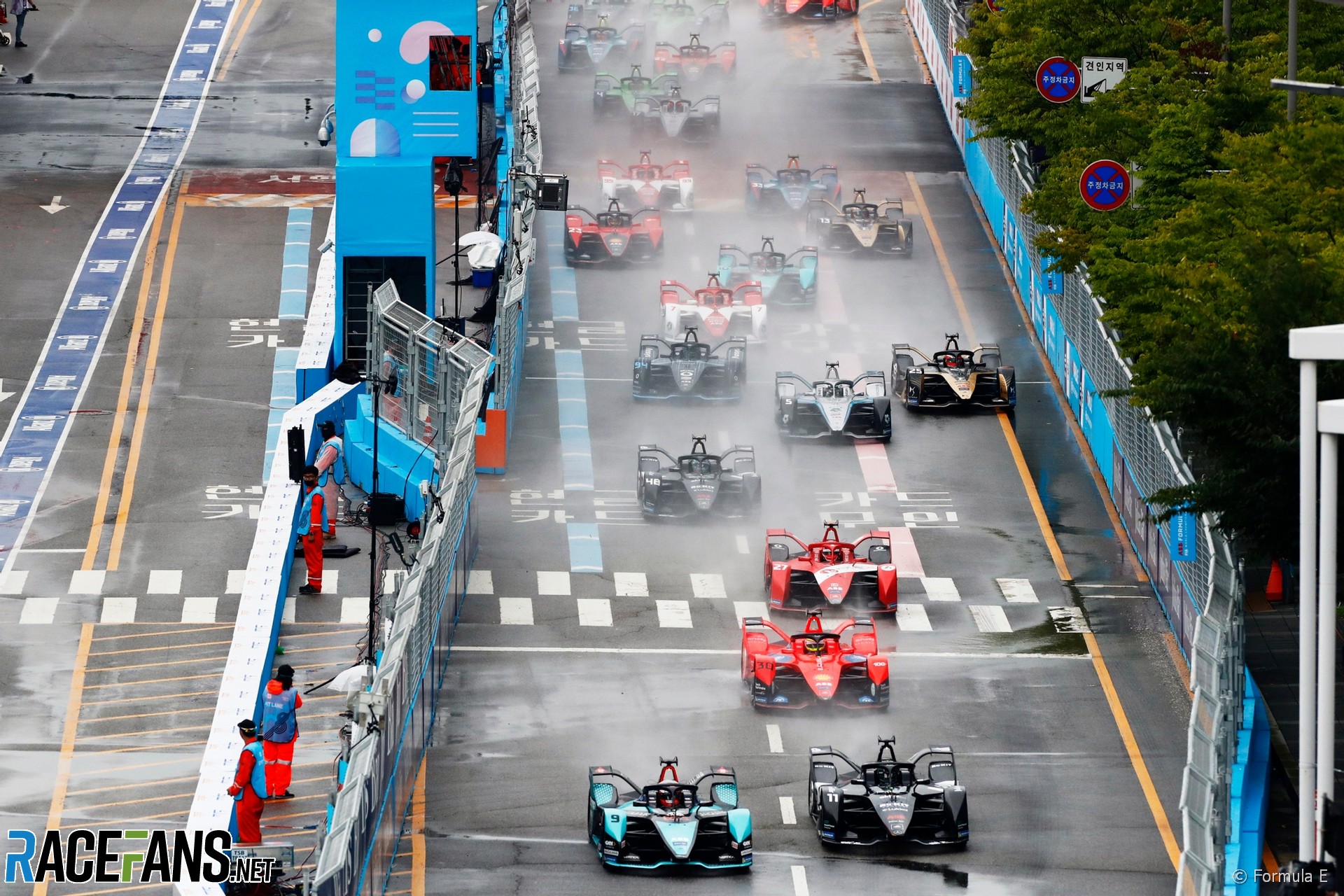 Mitch Evans won the first Seoul EPrix of the weekend to ensure that the battle for the Formula E title will go down to the final race tomorrow.

Evans took the lead on the opening lap and remained ahead for the entire race to win ahead of Oliver Rowland and Lucas di Grassi in third. Championship leader Stoffel Vandoorne finished in fifth place and will take a 21 point lead heading into the final race of the season.

Oliver Rowland had secured pole position, but the track was damp due to earlier rain. When the lights went out, the pole sitter was passed by both Lucas di Grassi and Mitch Evans. Evans fought hard with Di Grassi to take the lead of the race just a few corners into the lap, before Rowland took back one place by passing Di Grassi in the stadium.

However, at the end of the lap, there was a major pile up at the final corner with eight cars skidding into both the barriers and each other. Norman Nato, Dan Ticktum, Sebastian Buemi, Nyck de Vries, Nick Cassidy, Oliver Turvey, Andre Lotterer and Oliver Askew all crashed in the melee, causing the race to be immediately red flagged due to so many cars being entangled together.

There was a lengthy delay while the carnage was cleared. Eventually, the race resumed behind the Safety Car with only Nato and Cassidy continuing out of the cars that crashed. A total of 16 cars took the restart, with Evans leading from Rowland, Di Grassi, Jake Dennis and Eduardo Mortara in fifth.

Jean-Eric Vergne was chasing Mortara and was behind the Venturi heading into the first corner. Vergne looked to pass Mortara up the inside, but Mortara appeared to move to the right under braking and was hit by Vergne, sending him wide and allowing Vergne through. Despite being hit from behind and dropping to seventh, Mortara was handed a five second time penalty repeated change of direction while defending.

With around 20 minutes of standard race time left, Evans took his final Attack Mode first of the front runners from the lead, using it to add another second to his advantage over Rowland. Stoffel Vandoorne passed Vergne along the start-finish straight to move into fifth place, while Alexander Sims pitched Antonio Giovinazzi into a spin to drop the Dragon driver out of contention for the points, earning a five second time penalty.

When Evans’ second Attack Mode had expired, it was time for Rowland and Di Grassi to take theirs, but both drivers used up their four minutes of additional power without exchanging positions. Further back, Mortara suddenly slowed with an apparent puncture, eventually pulling off the circuit in the stadium and into retirement.

Evans continued to lead, although a mistake at turn 22 cost him over a second to Rowland behind. However, before Rowland could capitalise and try to apply pressure on the leader, Sims lost control in the stadium section and crashed sideways into the wall, prompting a Full Course Yellow in the final minutes.

As the final minute ticked away into 45 seconds of additional time, the Safety Car was deployed, securing Evans’ victory. He duly took the chequered flag to take the victory and ensure the battle for the championship would go down to the final round.

Vandoorne holds a lead of 21 points ahead of the final race, meaning he will win the championship if he finishes at least seventh.