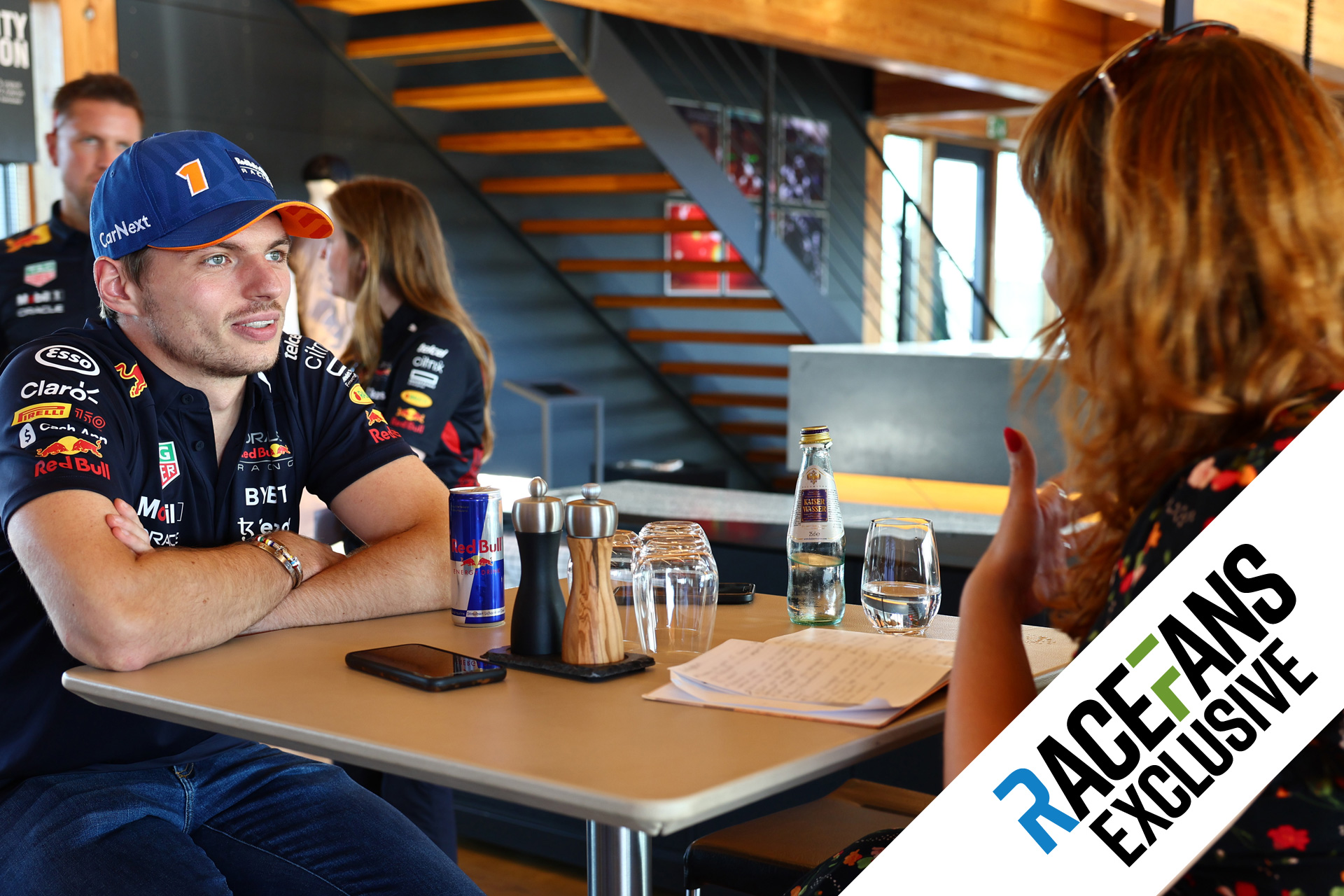 Max Verstappen is the new power in Formula 1. He may be in his eighth season but he is still only 24 years old – until the end of the month, at least.

He is the reigning world champion and, barring some outrageous misfortune, poised to claim a second title long before the curtain falls on the 2022 season.

Since he made his F1 debut seven years ago, and especially since his astonishing debut win for Red Bull in 2016, Verstappen has inspired passionate fans from his homeland and beyond who follow him around the world, turning grandstands and skies bright orange everywhere they go.

This is a special weekend for them and their man. Verstappen is back in his own backyard, the Zandvoort circuit in the Netherlands, returning as champion for the first time. He is keen to repeat his emphatic 2021 win, one of 10 which delivered his long-awaited championship triumph.

On the eve of practice for a race which could see him draw over 100 points clear of his closest rival, and make a second world championship even more of an inevitability, Max Verstappen spoke exclusively to RaceFans about his journey to F1 glory, the family of racers which gave him his start, his goals for the future and the state of the sport he increasingly dominates.

Verstappen arrived at his home race 12 months ago trailing championship leader Lewis Hamilton by three points. To the delight of the home crowd, the Red Bull driver single-handedly saw off a double-pronged attack from Hamilton and his Mercedes team mate Valtteri Bottas to claim the win and reverse Hamilton’s advantage.

That nip-and-tuck title fight continued until the final race of the season in Abu Dhabi. The outcome, tainted by former FIA F1 race director Michael Masi’s violation of the rules, proved bitterly controversial. But it was out of Verstappen’s hands, and he can hardly be expected to act as if there’s an asterisk next to the number one on his car.

Nine months on, 98 points up on his nearest rival, he has already been batting away questions about when he will seal his second title since mid-summer. However he expects a second crown cannot live up to the emotion of his breakthrough success.

“It’s not even necessarily about winning it again,” he says, “I think it’s just that winning your first is always going to be the most emotional one.”

He draws a comparison with his breakthrough race win six years ago, which made an instant star of the then 18-year-old. Red Bull prompted criticism for cutting Daniil Kvyat loose just four races into the season in order to promote Verstappen. But the critics were silenced when Verstappen capitalised on a lap one crash which wiped out the Mercedes drivers and soaked up lap after lap of pressure from Ferrari’s Kimi Raikkonen to claim his first win.

“The first one is still the most emotional one,” Verstappen says, “forget [winning the race in] Abu Dhabi because that was just crazy, because that then also gives you the first title. But that very first win, compared to all the other wins I’ve had, it doesn’t come close.

“Because it is something like you dreamt of for such a long time and then it becomes reality. First you think ‘oh, if I could ever be on a podium, that would be great’. And then of course, my first podium was the first win. So it was a crazy, crazy day, which I will remember forever.”

A word Verstappen regularly utters, appropriately enough, is ‘maximise’. He has total focus on wringing the most from every competitive scenario. That proved essential in last year’s bruising, 22-round fight with Hamilton in which the pair swapped the points lead five times and made contact more than once.

“It was a very tough and hectic season,” he relates. “We had to be, as a team, all the time 100% because we knew that if we wouldn’t be perfect they would beat us, and the other way around. And that made it really, really tough.”

His lead peaked at 32 points approaching mid-season, before Hamilton ground it down and overhauled him. With four races to go Verstappen was back on top again, 19 points to the good, then Hamilton produced a trio of wins which meant they headed into that fateful finale tied at the top.

“With the gap, opening it up, then losing it again and opening it up and then again it was coming down towards the end of the year it was tough,” Verstappen recalls. “But then we managed it at the end.”

The effort Red Bull poured into that campaign, pushing the development of their previous car as late as any rival, threatened to compromise their 2022 contender at a time when drastically overhauled technical regulations were arriving. In the new budget cap era, could Red Bull produce an all-new championship contender while maintaining its predecessor?

Verstappen admits he “came into this season really unknown because new cars, you never know, did we build a good car?” However he insists he was “very relaxed about it.”

“I said already last year everything that comes next is a bonus anyway. And luckily the team did build a very good car.”

That’s almost an understatement. Of the 14 races so far this year the RB18 has won 10, all bar one of which went to Verstappen. But it’s striking that he hasn’t picked up pole positions at anything like the rate he managed last year: he’s taken just three so far.

That required Verstappen to capitalise on opportunities in races to move forward and take the victories he need. He says he spent the five years between his first win and his first championship honing the skills and developing the maturity needed to do that.

“When I won that first race in 2016, that was amazing,” he recalls. “But then, of course, we had a few tough years where I felt I was ready for it. Of course I still made a few mistakes sometimes here and there.

“That was also because we had a car which was not capable of winning a championship, but sometimes could win a race, and then you would go flat-out for it and then sometimes it didn’t work out.”

That occasional impatience could be seen at races like Monaco in 2018, where he squandered a clear shot at victory by putting his car in the barriers at the end of final practice. Today the unforced errors are rarer – he spun on his way to victory in Hungary – but he feels he is in “a completely different mindset” now he knows he has “a car capable of winning it.”

Before he became champion “some races where you think ‘I’m a bit on the limit here’, like if I go a little bit, I try to extract a bit more, I might end up in the wall or I go off right,” he explains. “You have to try and balance that a bit more.

“So that’s why I think years after 2016, [when] sometimes we were winning the races, but we were not in that fight, [it] was sometimes a bit – not difficult to accept, but you also have to trust the process we were in to try and become, again, a contender for the championship.”

Followed his dominant victory at Spa last week Red Bull team principal Christian Horner said Verstappen’s title win had allowed him to take another step in competitiveness. Verstappen says his success has changed his outlook on racing and made it easier for him to deal with the inevitable setbacks that arise – even if that might not always seem to be the case in some of his more animated messages to race engineer Gianpiero Lambiase.

“Of course I want to win,” says Verstappen. “Like, I get upset if things don’t go right. But even, let’s say they don’t go right, it’s not as painful as before winning that first championship because that was my goal.”

On the evidence of the season so far, winning the world championship has not only given Verstappen a new attitude to his racing, it’s helped him become an even stronger competitor. One which, with eight races to go, has almost seen off the challenge of a resurgent Ferrari.

Meanwhile Mercedes have been in the doldrums. It remains to be seen if that force will be reawakened, and the ferocious battle we witnessed during 2021 will resume. Remembering what he went through last year, Verstappen seems somewhat ambivalent about that possibility.