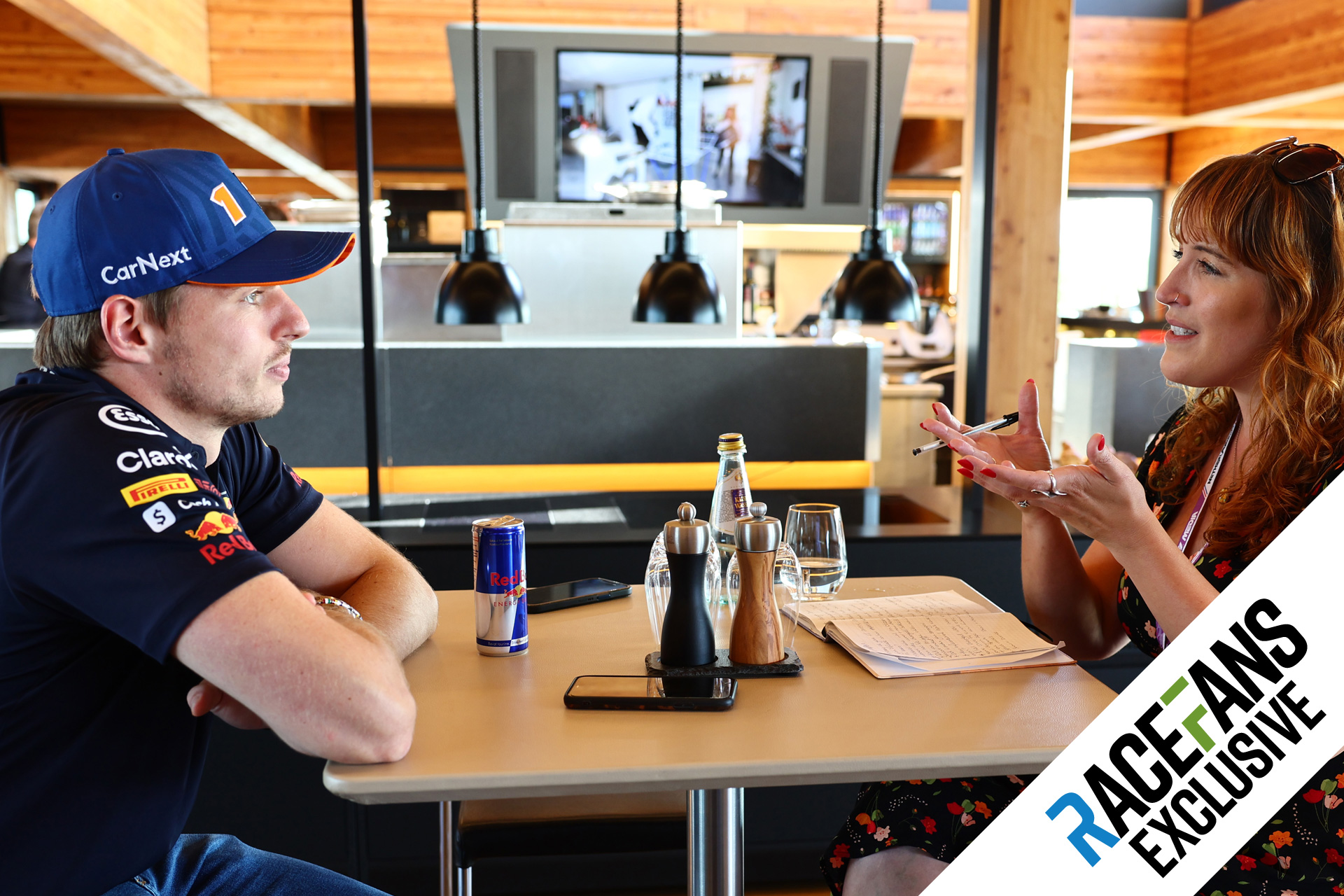 Max Verstappen could scarcely have hoped for a better build-up to his home race, which takes place today at Zandvoort.

He went into the summer break on the back of a remarkable win from 10th place in the Hungarian Grand Prix. The series reconvened at Spa-Francorchamps last weekend for what proved his most dominant showing yet.

The stunning turn of speed Verstappen’s RB18 demonstrated in practice looked ominous for rivals Ferrari and the rest. So much so that even when it was announced he would start the race in the bottom half of the field due to penalties, a Verstappen win was still widely predicted.

Sure enough, Verstappen was in the lead by half-distance and romped home to take not only his most emphatic victory of the season so far, but Red Bull’s biggest win for a long time. Team principal Christian Horner likened it to one of their stronger performances of the 2010-13 era, when every championship went to the team and Verstappen’s predecessor Sebastian Vettel.

After the spectacularly close conclusion to last year’s world championship, Verstappen’s increasing dominance of the 2022 season was not what F1 hoped to see as it introduced drastically overhauled technical regulations for this year. Nonetheless, F1’s efforts to close up the field and trim back the powerful surface aerodynamics which make it difficult for cars to follow each other closely have been broadly welcomed.

The same cannot be said for every other change made by Liberty Media, now in is fifth year in charge of F1, in pursuit of ever-larger audiences. Verstappen has not been shy about voicing his concerns over some of their decisions, such as deviating from the traditional race weekend format or the moving away from the sport’s most cherished circuits.

“It’s very commercial,” Verstappen acknowledges. “I mean, everyone wants to make money, right? I understand what it’s all built around nowadays because it’s more like F1 plus a festival, I understand.”

But while Verstappen appreciates the need for F1 to visit new places and appeal to new audiences, he strongly believes the sport must remain faithful to its traditions. In particular, the race weekend format.

He has made his distaste clear for Liberty Media’s sprint race experiment. The extra Saturday qualifying races were introduced last year to enormous hype but, at best, a mixed reaction from fans. In this case, not only does Verstappen consider the change a gimmick that doesn’t belong in F1, he questions whether they even provide the additional entertainment which was promised.

“As long as the core stays the same, I think that is very important,” he stresses. “I’m not a fan of sprint races because I don’t think that’s F1, and I’ve said it many times.

“Not only that, I think if you look at them, not many things have changed a lot because everyone is scared to crash and because the big points are on Sunday so you don’t want to risk it to the limit.”

Another change which concerns Verstappen is the consequences of the steadily expanding grand prix schedule. The 2023 F1 calendar is expected to feature 24 rounds – the maximum permitted under Liberty Media’s current arrangement with the teams.

With the competition for places growing ever more fierce, heritage European road courses are finding themselves squeezed out in favour of street circuits in glamorous locations. But swapping the likes of Spa-Francorchamps for Las Vegas doesn’t sit well with the world champion.

“We are going to new tracks and some tracks are dropping out. Some I don’t mind, some I do. That is something I think at the moment we have to find a balance [on].

“Of course F1 is becoming more and more popular and you have to make a few changes. But you need to keep some proper tracks and not go to all these street circuits and just build up the hype and stuff.

“It’s nice, a few street circuits, but at the end of the day you have to remember that F1 cars are not designed to drive on the streets.”

His Red Bull at least seems to cope with them better than others. The team has won on all four street circuits F1 has visited so far this year, Verstappen taking Jeddah, Miami and Baku while team mate Sergio Perez won in Monaco.

“Luckily our car’s a bit more comfortable than some others,” Verstappen adds, getting in a dig at arch-rivals Mercedes whose W13 dealt out particularly ferocious punishment to Lewis Hamilton over the bumps of Baku.

“But in general a street circuit is very bumpy and it’s something I don’t really like because I don’t really feel the same emotion as when you do a lap here in Zandvoort, like an old-school track.”

Despite the swelling size of the F1 calendar, in between races Verstappen can often be found tackling tracks in GT cars or honing his skills on his simulator. His appetite for racing is seemingly limitless.

After clinching the title last year, Verstappen did a deal with Red Bull which will keep him at the team until the 2028 season – by far the longest contract of any driver on the grid. But he has aspirations of sampling motorsport beyond F1 too.

“I want to try different kinds of discipline,” he says. “So probably a bit more endurance.”

Unfortunately for American fans, Verstappen confirms he is part of the contingent of F1 drivers that aren’t interested in tackling the particular demands and dangers of the Indianapolis 500.

“No ovals,” he stresses. “Just 24-hour races. Because I like to drive different kind of cars as well. Like I already do it now, like whatever GT3 cars and stuff.”

But even as F1 threatens to occupy almost half of next year’s weekends, Verstappen is hopeful of doing some extra racing while still in the series. “I really enjoy testing myself in different kinds of machinery because I think you can learn from it and become an even better driver,” he explains. “So that’s what I want to do in the future.

“Maybe even during my F1 career. But that’s [if] the schedule would allow that as well. At the moment that’s a bit hard to combine when we also go to more and more races.”

He has always made it clear that winning his first world championship was his career goal, and whatever successes follow that are bonuses. He is prioritising his enjoyment of the sport, and that appears to be allowing him to access the peak of his potential, as Horner alluded to after Verstappen’s crushing Spa win.

“What I think is very important as well is that you’re enjoying the moment,” says Verstappen. “Because these years they go by so quickly and everyone always thinks about the performance side.

“But are you even happy with what you’re doing? I think it’s sometimes what you have to question as well. I am very happy with what I’m doing right now and I’ll keep questioning myself.

“As long as I’m happy doing what I’m doing, I want to continue. But at one point, if it’s all becoming a bit of a problem and you don’t really enjoy it, then you have to try and maybe find something else.”

His Belgium win dealt another blow to the long-fading championship hopes of rival Charles Leclerc and his Ferrari team. It has propelled Verstappen into a points lead which is surely unassailable, even more so if he delivers another victory from pole position at home today.

Given his difficult start to the season, with two retirements from the opening three races, and the close competition Red Bull had with Ferrari prior to Spa, Verstappen admits he is much further ahead than he expected to be.

“It’s a bit surprising because initially we had our little issues. We retired, that was not great. We were massively behind and now we are massively in front.

“I do think a lot of races we had a really good car, but I wouldn’t say the dominating car. But I think as a team we really maximised most of our race results and that gave us this lead. I would say the only race I actually felt like we were really dominating was last weekend in Spa.”

Red Bull’s 2021 rivals Mercedes pushed them all the way; in contrast 2022 opponents Ferrari have run the full gamut of mistakes: Driving errors, tactical blunders, reliability failures, the lot. Verstappen admits that “in a way” he does wish the fight had been closer.

“And in another way, not, because of course it’s nice to have a big lead instead of being equal on points or whatever. But I also look at myself and the team – yes, it’s good to look at other teams, but at the end of the day, we can only control what we do ourselves.”

Verstappen’s 2022 season to date has been an object lesson in how not to be undone by an early setback. Barring a catastrophe, it is surely about to deliver him a second title.

Become a RaceFas Supporter today and browse the site ad-free. Sign up or find out more via the links below:

5 comments on “Exclusive: Verstappen on racing outside F1, ‘the show’ – and how to win a championship”