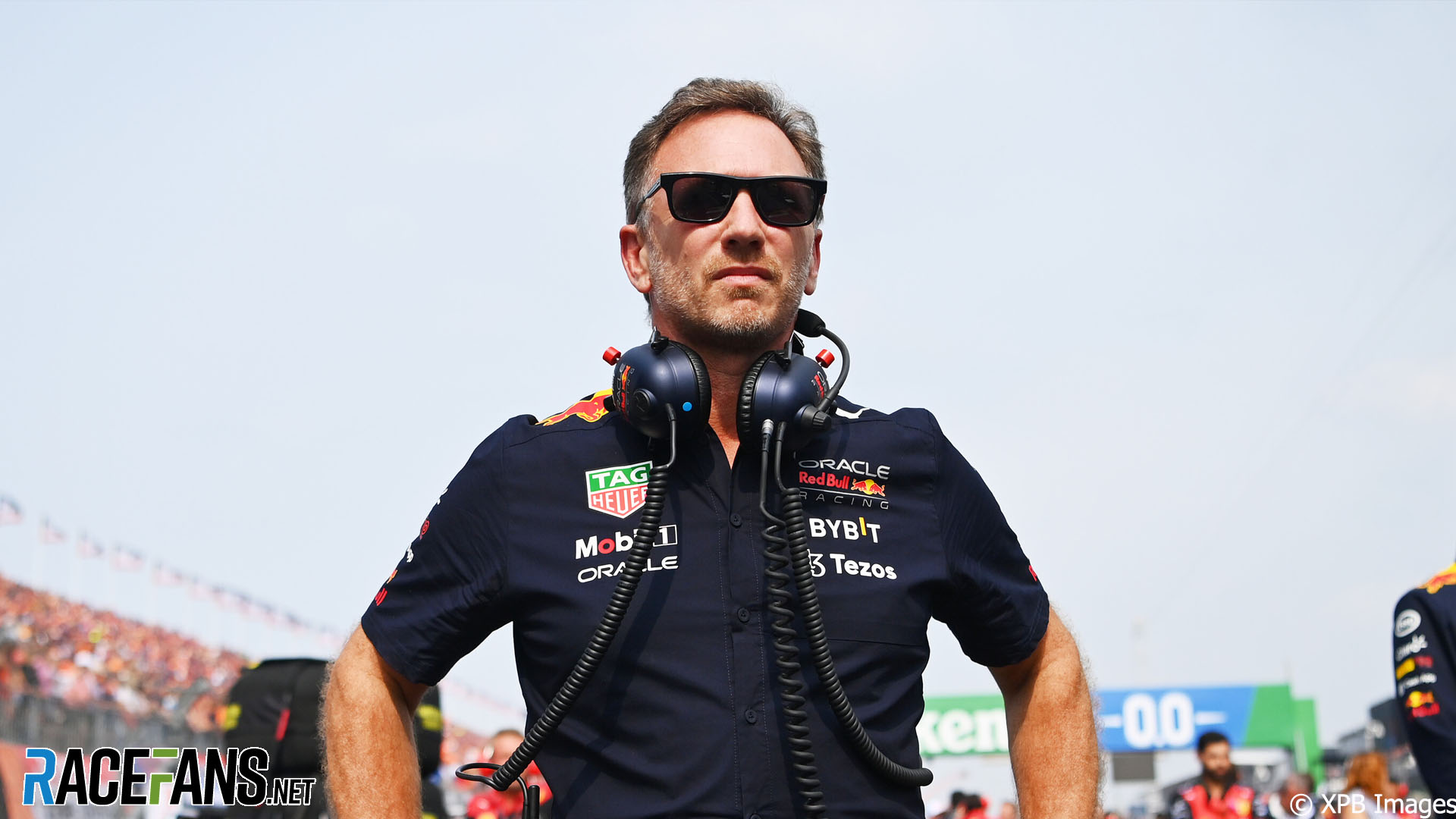 In the round-up: Red Bull team principal Christian Horner has categorically denied claims his position in charge of the team is under threat.

Horner has long-term commitment to Red Bull, regardless of Porsche

Reports in Dutch media yesterday claimed Horner was concerned he could be replaced as team principal if their deal with Porsche goes ahead. He emphatically rejected the claims after yesterday’s race.

“There’s always wild rumours in this paddock. I recently made a commitment to this team for the long-term and indeed any discussions that we’ve had have been contingent upon the management structure being the same, which has always been fully accepted. So I don’t really need to comment on wild speculation,” Horner affirmed after the Dutch Grand Prix.

“It just was a bit unlucky on Zhou’s side,” explained Pujolar. “He was just braking into the pit lane and applying the pit limiter, he locked the rears and then it triggered the anti-stall, it just slowed down too much. When he recovered he just overshot slightly the speed and got caught over-speeding.”

Richard Verschoor claimed second place in the Formula 2 feature race at Zandvoort after colliding with Jack Doohan following a late-race Safety Car restart. Doohan’s race was ended by the clash but Verschoor was not penalised for the collision.

Speaking after the race Verschoor apologised to his rival. “It was definitely not my intention to hit him,” he said. “I thought everybody was going and then we all slowed I locked all my wheels but I couldn’t avoid it. It’s not the way I want to finish second.”

“Because the last corner is banked I couldn’t see the cars in front,” the Charouz driver explained. “Then the two cars in front of me start accelerating and suddenly they braked and I was just too close. I thought I had a good restart, but then everybody braked again so I just hit him.”

The stewards indicated they were dissatisfied the collision occured, but said in their statement they could not find an offence to penalise. “Having considered the matter extensively, the stewards determined that car five [Lawson] accelerated very late just before the Safety Car line. Additional the driver of car five was weaving prior to his restart.

“Further back in the field of cars there was a collision between car 20 [Verschoor] and car three [Doohan]. Car 20 was not able to brake and ran into the back of car three who subsequently retired.

“The stewards don’t like to see restarts conducted in this way but finally couldn’t find any breach of the Sporting Regulations, hence the decision of ‘No Further Action’. The driver of car three stated after the announcement of the decision that he concurred that it was a racing incident.”

Pourchaire: 'Title almost out of reach but I'll be racing to win at Monza' (Formula 2)

'In the last two rounds I will just give my best. I don’t care anymore about the championship. For sure I still care about it and it’s still possible mathematically, so I will never give up, but there’s been no luck this season. It’s crazy.'

For four years, Mr. McGurr has been documenting the fast-paced life of Lewis Hamilton, the champion Formula One driver, going everywhere including the Monaco Grand Prix and, last month, the gorilla jungles of Rwanda. 'It feels great to be back from such an incredibly profound trip, but also feeling a bit of culture shock coming from an actual jungle back to my concrete jungle,' he said.

Brabham couldn’t stick with Pedersen on the restart though, with the poleman putting in a perfect drive to gradually build his gap up front. Late in the race, Brabham had more pace than Pedersen and began to close in, but the leader didn’t put a wheel wrong and finished just under a second clear.

No penalty for @schecoperez for running over a @scuderiaferrari wheel gun during a pit stop.

"The stewards took into consideration the configuration of the pit lane which is particularly short and thus decide not to take any further action." #F1 #DutchGP #RaceFans pic.twitter.com/5lGCo75HPN

Don’t forget guys, if you’re coming to the track today leave your pigeons at home.

Nothing LH or Mercedes could have done in that situation. Couldn’t take tires and lose the track position. GH made the right call for his race, and even him staying out wouldn’t have changed the outcome.

Great to see Craig Skinner on the podium today for RBR. A key part of the team for many years and deserves recognition.

We’re getting closer. 👊 Big thanks to the team for continuing to push and to the fans for creating a mega atmosphere. Respect to @LewisHamilton for the performance this weekend too – you deserved to be standing on the podium today. We’ll get that W soon… pic.twitter.com/COUslXL1nD

If you're on a media pass and wearing a photo vest, don't get autographs. You're supposed to be there working, not being a fan. You make the entire profession look bad. If you want an autograph, that's fine. Arrange it properly with PR.

Thanks for coming to my TED Talk.

Worth remembering special exemptions have been granted before for Super Licenses. There is precedent. The easiest solution would be for FIA to let Herta’s Lights season count for full points and AT run him at Abu Dhabi this yearhttps://t.co/8PNeNdw7DL

After a one-stop, risky strategy failed to pay off at the Dutch Grand Prix, Edvaldo argues that despite its technical dominance of the turbo-hybrid era, Mercedes’ strategy remains a weakness.

Mercedes can design the best cars possible, but they’re never going to dominate it like Red Bull does because their strategist was never that good. I remember Singapore 2019 which was completely in the bag but they left him out running longer when it was clear the undercut was very powerful for God knows why. So he came back in fourth and was stuck. Couldn’t get even third.

To be good strategists during a whole season with great cars and drivers is very easy, you can always bounce back at the next race. Now they don’t have the great car anymore, the good opportunities are few and far between and their strategies are as unremarkable as ever.
Edvaldo