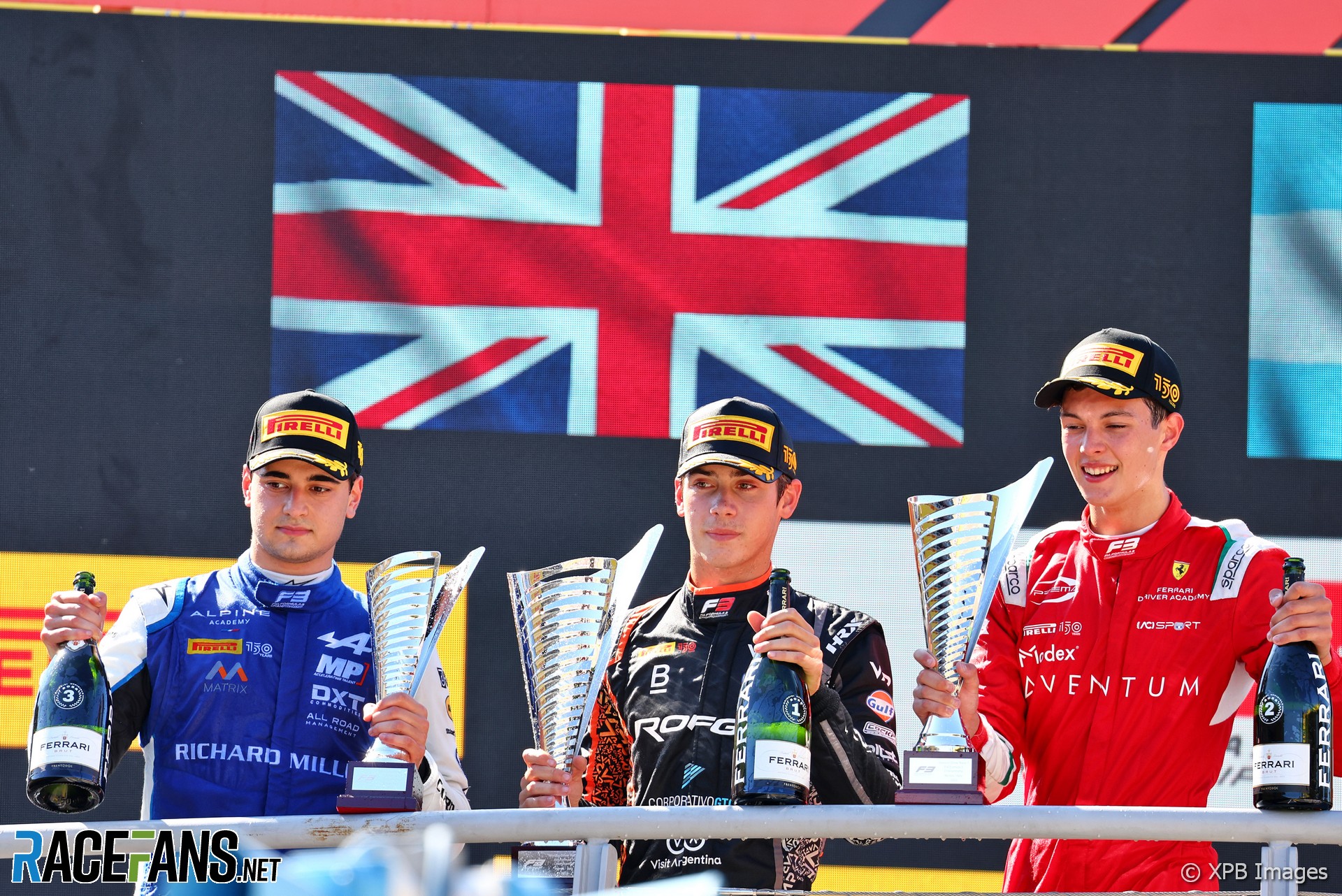 Franco Colapinto held off Oliver Bearman on the final lap to win the FIA Formula 3 Monza sprint race from pole, while behind him chaos ensued for the drivers at the top of the championship standings.

The opening race of F3’s final weekend this year saw seven drivers in mathematical contention for the title, the top two of Victor Martins and Isack Hadjar separated by just five points. Hadjar had crashed in qualifying, relegating himself to a 14th-place starting position for both races.

David Vidales was initially left stranded on the formation lap, his Campos team having forgotten to take an umbrella hanging over the cockpit of his car. He stalled and was taken to the pit lane but was ultimately unable to start the race. Hunter Yeany, due to start behind Vidales, was subsequently given a ten-second stop-go penalty for being out of position at the Safety Car line to the grid.

Martins ran onto the gravel at Curva Grande after clashing with Oliver Bearman in one of multiple first-lap incidents, leading to the championship leader losing more than ten places. In another incident, Alexander Smolyar was squashed between Zane Maloney and Kaylen Frederick and went into barriers at Roggia – however, he was able to continue the race, albeit far down at the back of the field.

A yellow flag was called when Zak O’Sullivan locked up into turn one and ended up hitting the barriers nose-first. The Safety Car was deployed called on lap four, throwing a potential lifeline to Martins, at that time fighting his way up from 22nd.

The race restarted on lap nine, Colapinto keeping the lead despite a major challenge from Caio Collet through Curva Grande. Bearman had a good restart, commencing what would turn out to be an extraordinary charge up the order from fifth.

Bearman overtook Josep Maria Marti into Rettifilo on lap 11, despite the Campos driver initially taking the place back. He then made up nearly two seconds to the front runners to overtake first Johnny Edgar, then Collet.

Hadjar pitted on lap 10 for a front wing change, his opportunity to capitalise on Martins’ misfortune evaporating after contact on the restart. Martins also found another car’s diffuser into turn one but managed to avoid having to compound his already miserable position with a pit stop.

By the penultimate lap, Bearman had Colapinto within DRS range and the Van Amersfoort driver was forced to defend hard from the Prema. Bearman followed Colapinto across the line but was unable to pass him before the chequered flag. Collet completed the podium, more than a second and a half behind them.

Bearman furiously debated with his Prema engineer on the in lap, saying he’d been told there was one more lap than there was. Nevertheless, he took second place and put himself third in the title standings and very much in contention for the championship in the final race.

Martins’ tenth place finish puts him one point further ahead of Hadjar, whose race was fruitless. He takes a narrow six-point lead into the feature race. Bearman, Maloney, Roman Stanek and Arthur Leclerc all hold a mathematical chance of clinching the title during tomorrow’s final feature race of the season.