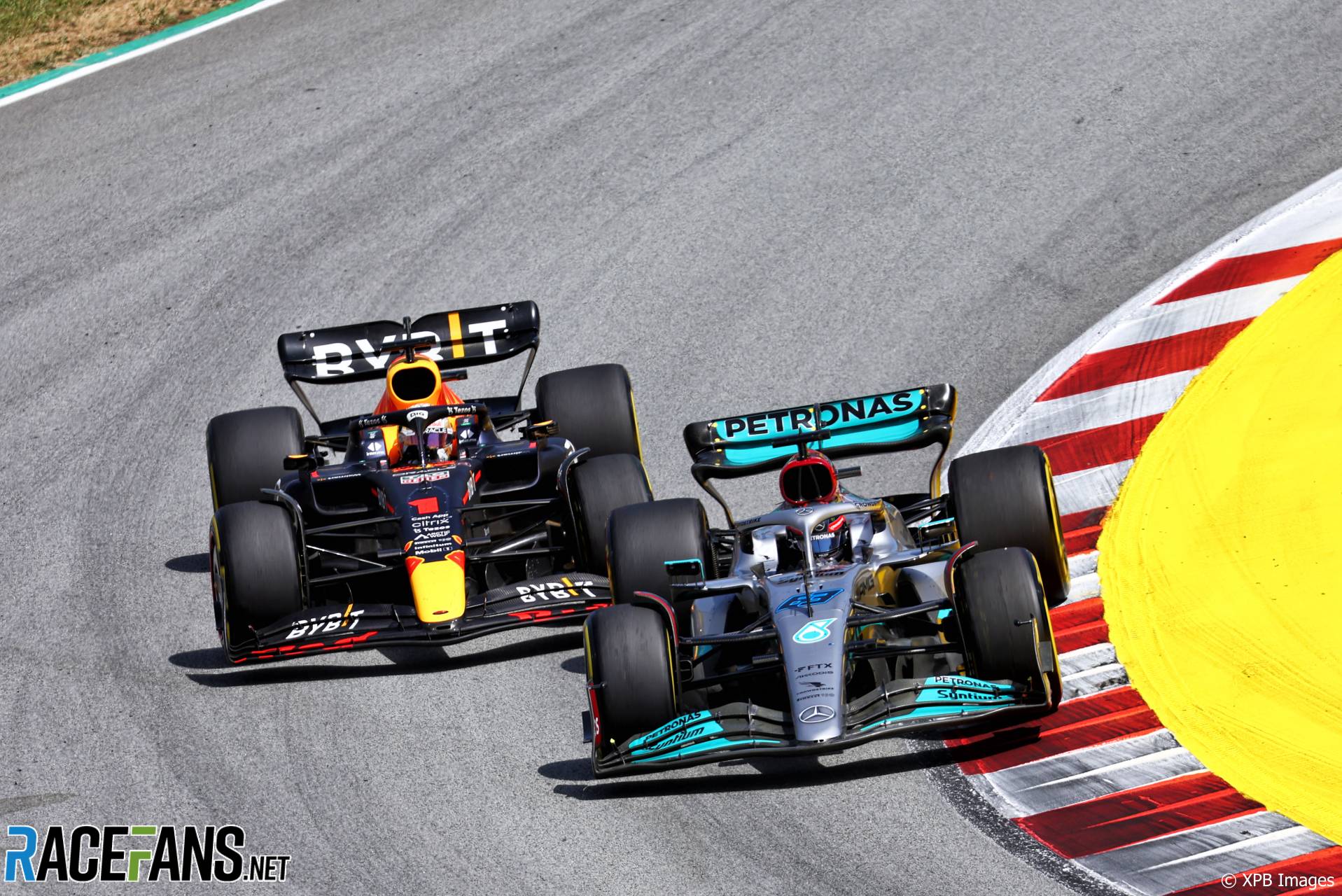 The Singapore Grand Prix this weekend marks the first opportunity for Max Verstappen to become a two-times Formula 1 world champion. And although that is a possibility, there’s a bigger story at play with the return to the venue of F1’s first ever night race.

Added to the calendar in 2008, and a permanent fixture until the Covid-19 pandemic prevented the race from being run the last two years, the Singapore GP is one of the toughest events for drivers. Besides the hot conditions and the demanding circuit layout, the novelty of the race being run at night adds further challenges.

Here are the top talking points for this weekend’s potentially championship-deciding race:

Is this Mercedes’ last big chance to win?

Mercedes have put themselves in victory contention at some of the high-downforce tracks that F1 has recently visited. The Marina Bay street circuit is another that could suit their W13 car as the 5.06-kilometre track packs in 23 corners.

Red Bull team principal Christian Horner certainly thinks that Mercedes will be rivalling his team under the spotlights based on their recent pace at other high-downforce circuits that are tight and twisty like the Hungaroring and Zandvoort.

“Mercedes, as they had in Hungary, on this type of venue, they’ve got a quick car,” Horner said. “So one would have to think probably Singapore, they’re going to be quick there as well.”

While still trying to get their head around the 2022 technical regulations with the car they had produced, Mercedes were thoroughly outpaced by Ferrari and Red Bull on the street circuits that populated the season’s first half. Since returning to conventional circuits their form has improved.

They could overtake Ferrari for second in the constructors’ championship with more consistent point-scoring and podiums. But team principal Toto Wolff has said getting a race win is of more importance this year.

Will the field go the distance?

The high frequency of corners around Marina Bay means there is a lot of action at the wheel during just a single lap of this track.

With the cars F1 had on its last visit, the track was one of the most demanding for gear changes. The tyre-punishing layout – particularly its first two corners and the traction-heavy final sector – meant surface temperatures increase quickly and lead to drivers fighting to keep control of their cars after just a few laps. This can be difficult to assess during practice, most of which takes place during the heat of the day.

Of course it’s not just the tyres where there is a heat concern, as everything in the car including the brakes and driver has to contend with air temperatures north of 30C in the daytime and at least 25C at night according to this weekend’s forecasts. As F1 drivers also sit in front of a rather hot engine (which will be under strain with a lack of cool, oxygen-heavy air feeding into it), the temperatures they will actually be dealing with in the cockpit can be as high as 60C and they will usually be in the car for over two hours on race day.

An estimated three kilograms of body weight will be lost in sweat alone, with only a limited water bottle supply available to drivers, and the fully geared up pit crews will also be feeling the heat.

Can the Singapore newcomers get up to speed?

As the grand prix has been absent from the calendar since 2019, it means four drivers on this year’s grid will be racing in Singapore for the first time.

Williams’ Nicholas Latifi, whose F1 debut came in 2020, series sophomores Mick Schumacher (Haas) and Yuki Tsunoda (AlphaTauri), and Alfa Romeo rookie Zhou Guanyu will all be using their free practice time to learn the track and all of the braking and turn-in points, remembering where they can and can’t short-shift, and how the car handles on high and low fuel. However day and night are two very different beasts.

That quartet may not be the only ones with a lot of learning to do. Teams have openly talked this year about how the references and starting point they had for set-up at circuits has been thrown out of the window due to how different the 2022 technical regulations are. The drivers now have cars that handle very differently – when alone and while behind other cars – to when they last visited Singapore.

Combine that with larger tyres, as F1 cars now sport 18-inch wheels rather than the 13-inch wheels of 2019, and with the three softest compounds (C3, C4 and C5) as the hard, medium and soft options that are “a completely different compound and structure compared to the ones used three years ago”, then it’s “almost like a totally new race” according to Pirelli.

The tyre manufacturer’s assessment of that also factors in that new asphalt has been laid which is more abrasive than the surfaces usually seen on street circuits in F1. It’s bumpy, too, and the more conventional suspension systems teams have to use this year may not be tuned to its demands so easily.

Every single F1 grand prix in Singapore has included an appearance by the real or virtual safety car. Notoriously, the first of those was deliberately instigated.

The 2008 Singapore GP featured one of the most infamous moments in sport history, as Renault asked Nelson Piquet Jnr to deliberately crash to aid team mate Fernando Alonso, who won the race. In the ensuring Safety Car period Felipe Massa’s victory hopes were wrecked when he left his pit stop with a fuel hose still attached to his car.

Although overtaking is difficult, there has still been plenty of drama in the years since. Nico Rosberg looked set to deliver Williams a first win in five years before crossing the pit exit line in 2009, Heikki Kovalainen won F1 graphics provider LG’s moment of the year by putting out a fire on his Lotus in 2010, Sebastian Vettel and Jenson Button had a tense victory battle in 2011 without ever passing each other.

It’s a track which offers midfielders the chance to bag big results, such as Paul di Resta’s career-best fourth place for Force India in 2012 (on a weekend when Pastor Maldonado put his Williams on the front row). That kind of race is more typical of Singapore than the 2011 edition, which almost went Safety Car-free. In 2015 a spectator wandered onto the track and triggered another interruption – hopefully nothing like that happens this weekend, but a lizard even appeared on track during a practice session the following year.

That year just two laps spent at reduced pace behind Maylander’s Mercedes AMG, while a year later over a fifth of the race ran behind the Safety Car in part due to a start-line incident between Verstappen’s Red Bull and the two Ferraris. Again a midfielder capitalised, this time Toro Rosso’s Carlos Sainz Jnr who came through to finish fourth ahead of several other cars that wouldn’t usually have been in the points positions.

Who’s got the most to gain?

Three drivers in particular will be looking to profit from any chaos this weekend, as they’re out of contract for 2023. Williams’ Latifi, McLaren’s Sergio Perez and Haas’s Schumacher all need a big result to help make their case that their F1 careers should continue into next year.

As Latifi and Schumacher haven’t been to the track before, it will be harder for the pair to be in a position to benefit from others’ mistakes – if they haven’t made their own – but Ricciardo was on the Singapore podium in four consecutive years and seems to have now fully cleared his head over losing his McLaren seat to Oscar Piastri.

The driver with the biggest stakes at play is Verstappen, who can wrap up the title five races early if he wins and his title rivals perform badly. His march to several F1 season records will also continue should he have a perfect weekend, and he would become just the fifth driver in F1 history to win the Singapore GP.

Then there’s Pierre Gasly, who does have a 2023 contract with AlphaTauri but is also looking to land Alpine’s vacant seat. Red Bull appear willing to let him go, but Alpine are yet to commit to taking him on. He’s done the Singapore GP twice before, is feeling confident about his third go and has taken his AlphaTauri to the top five in Baku the last two times. This is another track largely comprises slow corners, so it could be a weekend for Gasly to shine.

Are you going to the Singapore Grand Prix?

If you’re heading to Singapore for this weekend’s race, we want to hear from you:

Who do you think will be the team to beat in the Singapore Grand Prix? Have your say below.