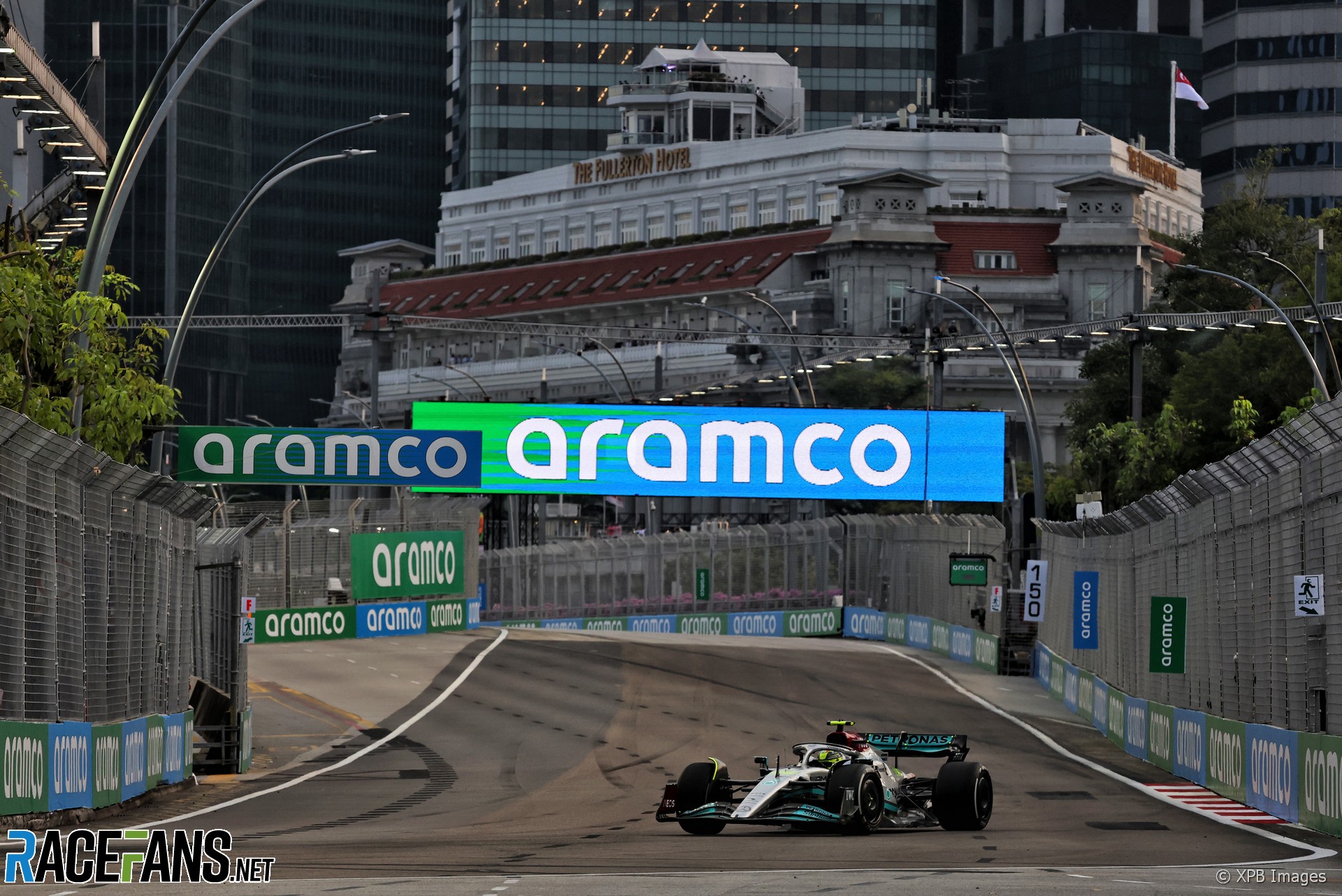 The Mercedes drivers’ best time of a 1’43.033 saw him finish top of the times in a practice session for the first time in 2022, with Verstappen over three tenths quicker than Charles Leclerc, who ended the hour third in the Ferrari.

With the sun still in the process of dropping under the Singapore skyline as the first practice session began, it was a warm and humid start to the weekend with ambient temperatures sitting just above 30 degrees as drivers headed out onto the street circuit for the first time in three years.

After missing the Italian Grand Prix for medical reasons, Alexander Albon took to the track in his Williams and confirmed that he was truly fit and ready to race once again. The early pace was set by the two Red Bulls of Verstappen and Sergio Perez on the medium tyres, with Verstappen’s 1’45.466 acting as the early benchmark.

George Russell brought out the yellow flags briefly after locking up at turn 11 and gently nudging the barriers. Luckily for Mercedes, Russell hit the wall straight on with his front wing, minimising damage to his car and allowing him to quickly reverse out and recover to the pits.

Fernando Alonso used a set of medium tyres to go second quickest, but was still over a second slower than the championship leader. Unfortunately, a gearbox oil leak caused Alpine to abandon Alonso’s run, keeping him in the garage for extended maintenance.

With half an hour of the session gone, drivers began to head out on the soft tyres. Lance Stroll improved to jump into second place, just under a second slower than Verstappen. However the Aston Martin driver then tagged the wall on the exit of turn five, breaking his suspension on the left-rear. Stroll stopped his AMR22 on the track, bringing out a red flag than halted running for around five minutes.

When the session resumed, Carlos Sainz Jnr headed out on soft tyres and used the clear track to improve to third, but ran wide on the exit of the final corner to do so. Team mate Leclerc jumped to second on his first lap on the softs, three tenths off Verstappen’s best, before Lewis Hamilton put in a 1’43.033 to put his Mercedes to the top of the times.

Perez had to abandon a lap in the final sector after reporting losing drive in his Red Bull, but managed to cruise into the pit lane and recover to the garage safely. His team mate Verstappen ran off at turn 16 after a mistake under braking and had to spin his Red Bull around 180 degrees to rejoin the circuit, compromising Esteban Ocon’s lap as the Alpine driver arrived to the scene under yellow flags.

There were no improvements at the top half of the field in the closing minutes, leaving Hamilton on top, just under a tenth of a second faster than Verstappen behind. Leclerc was third fastest, four tenths away from Hamilton’s best. Perez ended the session fourth, with Russell and Sainz behind. Ocon, Stroll, Pierre Gasly and Alonso completed the top 10.