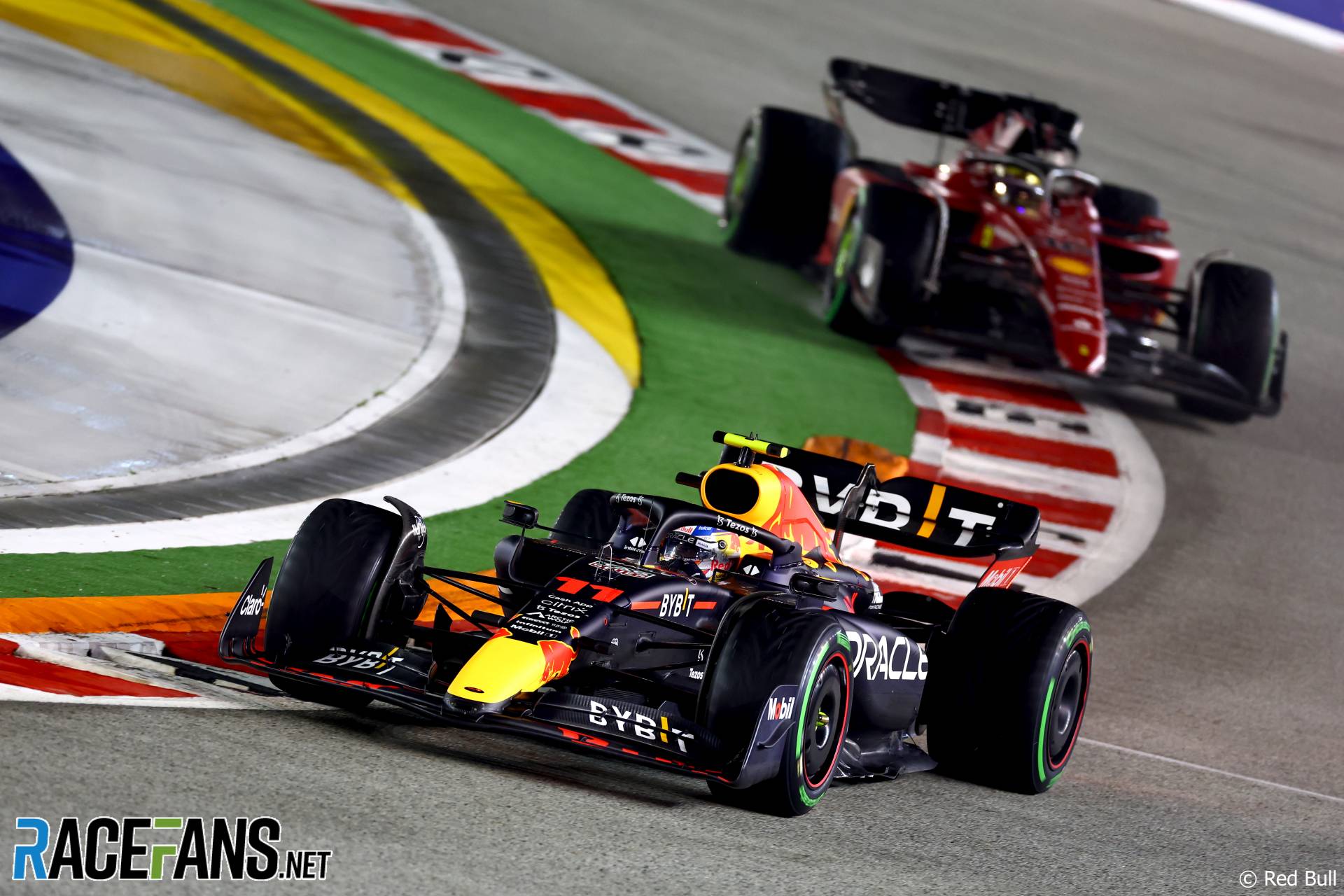 Sergio Perez led the majority of the Singapore Grand Prix to take the chequered flag first, but is under investigation for a Safety Car infringement.

In a race disrupted with multiple Safety Car and Virtual Safety Car appearances, Perez held off Charles Leclerc throughout the race to take the chequered flag first. However, his win remains unofficial as he will be investigated for breaching Safety Car procedure by dropping too far back prior to a restart.

The start of the race was delayed by over an hour due to a torrential downpour that soaked the Singapore circuit prior to the original 8pm start time. After the delay the formation lap began an hour later than scheduled with no more rain falling onto the circuit and all 20 cars on intermediate tyres.

When the lights went out, Perez jumped Leclerc to take the lead of the race, while Sainz moved ahead of Lewis Hamilton to take third position. Having started eighth, Verstappen dropped down to 12th position by the end of the first lap as his team mate pulled out a lead of a second over Leclerc.

Leclerc kept the gap to the leader under two seconds through the early laps as the pair pulled slowly away from Sainz in third. Zhou Guanyu became the first retirement of the race on lap seven when he was hit by Nicholas Latifi while trying to pass the Williams around the outside of turn five, breaking his suspension and forcing him to pull off the circuit. The Williams driver was later penalised for the collision.

The Safety Car was deployed for a handful of laps to allow for Zhou’s Alfa Romeo to be cleared. None of the drivers chose to pit under the Safety Car and the race restarted at the beginning of lap 11 with Perez still leading ahead of Leclerc and Sainz. Verstappen, who had made his way up to eighth before the Safety Car, quickly relieved Pierre Gasly of seventh at turn 13.

Again, Perez and Leclerc pulled away from Sainz. The track dried out very slowly, with drivers nursing their increasingly worn intermediate tyres to try and run as far into the race as possible before switching to dry tyres.

On lap 21, Fernando Alonso suddenly pulled off the track into turn ten, his Alpine slowing on the short straight. As Alonso retired, the Virtual Safety Car was deployed.

Under the VSC, Mercedes called George Russell to switch to medium slick tyres from 15th place, dropping him to the back of the field. When the race resumed, Russell struggled to find any grip on his new slicks, losing nearly 10 seconds a lap to the field ahead of him.

Alexander Albon hit the wall at turn eight, losing his front wing, but he managed to reverse back onto the track and continue back to the pits. The Virtual Safety Car was deployed, but the race resumed shortly after with no one taking the opportunity to pit.

Shortly after, another Virtual Safety Car was deployed when Esteban Ocon pulled off track with a smoking car at turn 13. By this stage, the race had reached half distance but still only Russell had braved a move to medium tyres and was far off the rest of the pack in last position.

Hamilton pressured Sainz for third, but locked up into turn seven and stuck the barrier head on, losing multiple positions and damaging his front wing, but was able to rejoin just ahead of Verstappen. At this stage, teams began to call their drivers in to pit for slick tyres. Leclerc pitted for mediums from second, with leader Perez following a lap later, retaining the lead.

After switching onto medium tyres, Yuki Tsunoda out-braked himself into turn ten and speared into the barrier, bringing out another full Safety Car. The field bunched up once again, with the race restarting on lap 40 with Perez again leading from Leclerc and Sainz with many drivers taking their first laps at racing speed on slick tyres.

Verstappen attempted to pass Norris for fourth into turn seven, but locked up heavily and had to take to the escape road and spin his Red Bull around. With his tyres heavily flat-spotted, Verstappen pitted and moved onto a fresh set of soft tyres, dropping him to 12th.

With so many Safety Cars, the race was now time limited. Perez was still leading, but Leclerc was now less than a second behind. As the track was now considered dry enough, race director Eduardo Freitas activated DRS with just under 30 minutes of race time remaining.

Leclerc placed the leader under intense pressure, but Perez absorbed the Ferrari’s advances until a mistake from Leclerc moved him beyond a second away from the Red Bull. However, the stewards announced that Perez would be investigated after the race for allegedly breaching Safety Car procedure before the second restart. Red Bull instructed their driver to pull out as big a gap as he could to cover a potential penalty, with Perez responding with a new fastest lap.

As time ticked down, Perez pulled away out front. When time expired, Perez crossed the line to take the chequered flag, 7.5 seconds ahead of Leclerc at the line. Sainz finished third to complete the podium, a further seven seconds adrift of his team mate.

The two McLarens of Norris and Daniel Ricciardo finished fourth and fifth, with Lance Stroll securing Aston Martin’s best result of the season in sixth. Verstappen finished seventh ahead of Sebastian Vettel in eighth, Hamilton ninth and Pierre Gasly taking the final point in tenth.