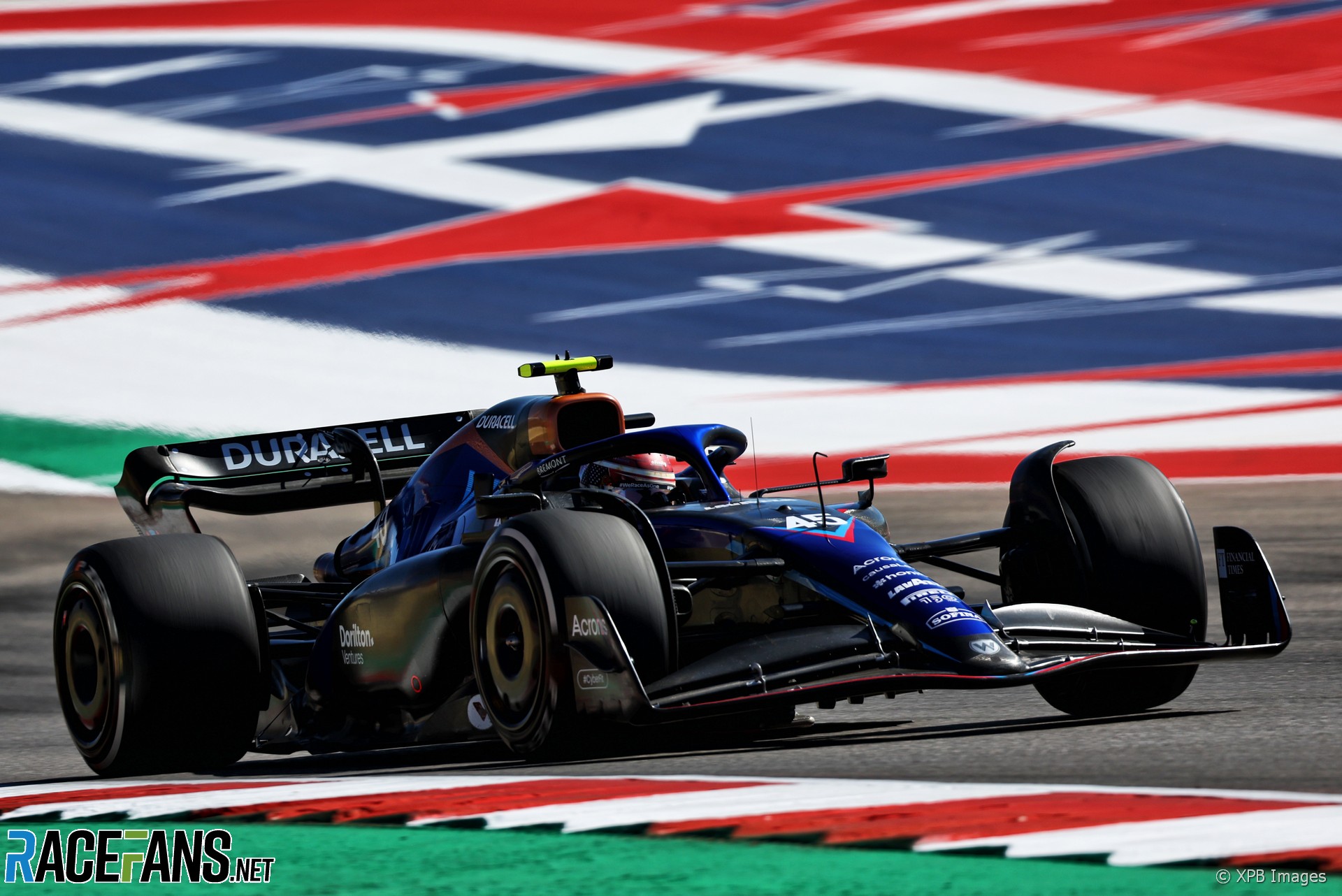 The name Colton Herta dominated the mid-season driver market chatter as Red Bull endeavoured to bring the driver who won his third IndyCar start as an 18-year-old into Formula 1.

The FIA said ‘no’ to that, but while Red Bull looked elsewhere another young American racer was making his care for a promotion to the grid for the 2023 F1 season.

Saturday at the United States Grand Prix therefore began with two big news stories for American fans: one was the extension of a free-to-air television deal, and the other was the announcement that next year an American driver should be on the F1 grid.

The timing of Williams’ announcement of Logan Sargeant for 2023, pending he acquires an FIA superlicence, could not have been better for capturing the attention of a wider audience than F1 news usually attracts.

A day earlier Sargeant had made his F1 practice debut with the team, and a year prior he had been announced as a member of Williams’ driver academy, shortly after his IndyCar test debut had been called off. Some 14 months before that, Williams was acquired by New York-based investment firm Dorilton Capital.

At last year’s US GP, Williams’ head of vehicle performance Dave Robson said “the USA now represents a second home race for us”. Next year’s calendar will include three such races following the additions of Miami and Las Vegas.

Sargeant’s promotion to a race seat may be a consequence of not only Williams’ transition to American ownership and F1’s expanding presence in the country, but his say that is not the reason why the 21-year-old has been chosen for next year.

“I would say it is good for F1 to have an American driver,” Williams team principal Jost Capito acknowledged, “[but] we didn’t pick Logan in the academy because he’s American.

“We picked him because of his success and his past in racing. Then if we take the kids that we put into the academy, it’s the objective to get them in the F1 car. I think that it’s also true to the young drivers.

“If you have a young driver who is ready for F1, and you have the seat, then you have to put these young drivers into the seat otherwise you’ve done something wrong. And that’s why we came to that conclusion that it’s the right thing. That Logan is American, I think it’s just nice to have. But it’s not the initiation of the decision.”

So what has Sargeant, who is currently fighting to be runner-up in the Formula 2 championship as a rookie, shown to earn an F1 drive?

He won races in Formula 4 and Formula Renault 2.0 in the first two years of his junior single-seater career, then endured a rookie Formula 3 season with a struggling Carlin team before showing his potential with third place in the 2019 Macau Grand Prix.

A move to Prema for 2020 set up Sargeant for a title attack and he only just lost out to Oscar Piastri (his fellow 2023 debutant, if all goes to plan) and Sauber protege Theo Pourchaire in the final race. That showed the calibre of drivers he was capable of beating, but a change to the Sargeant family’s financial situation meant a move up to F2 last year was not possible.

Sargeant’s career was given a lifeline by Charouz Racing System, an F3 team that had scored just five points in 2020 but was able to bring in Sargeant without requiring a budgetary contribution from the American. They hired him for his experience and pace, and tasked him not with winning the title, but to lead the development of its set-up for F3, both in engineering the car and also the kinds of decisions the race team were making. Top results were not guaranteed given Charouz’s past form, so it was a big risk for Sargeant’s reputation.

In a position that drivers usually get when they reach F1, Sargeant was able to make a real difference to Charouz’s F3 operation and show how he had applied his experience of working with the benchmark Prema team. He claimed Charouz’s first podium and added two more before finally winning a race in Sochi and coming seventh in the championship standings with 80% of his team’s points. Being stuck firmly in the midfield, with more reverse-grid races in the series’ one-off 2021 format, gave Sargeant the chance to improve his racecraft, too.

That campaign earned Sargeant his second lifeline, the backing of Williams. There were already several people in the team who knew him well and may have proven to be vital connections.

Chief among those was Williams’ outgoing driver George Russell, who was headed to Mercedes for 2022. Both drivers are part of the Infinity Sports Management stable, which has looked over Sargeant’s career since his rookie season in junior karting way back in 2003, and during Russell’s time at Williams several of his and Sargeant’s friends (and Infinity stablemates), including drivers and those in mechanical roles, found their way into jobs at the team.

“I’ve known Logan since 2012, probably, [and] driver coached him in 2017 when he raced in British F4,” Russell recalled last weekend.

“So it will be fun if we’re on the grid together next year. He’s a good kid, works hard, he’s definitely very fast. I’m really glad to see he got a second opportunity in his junior career when Williams backed him, and he’s proven what he’s capable of in F2 this year. So I hope he gets to drive.”

Having shown what he could do with a team at the back of the grid in F3, Sargeant got the same opportunity in F2 at the end of 2021 as he made his debut with HWA Racelab in Jeddah. As F2 raced on different weekends to F3 that year he was not able to establish the connections he needed for F2, nor in F1 due to the paddock bubble system still in place from the Covid-19 pandemic, and that weekend was another important one for setting up his future.

In December, Williams announced Sargeant would drive for them in F1’s official young driver test, and he was then named as one of Carlin’s drivers for the 2022 F2 season. With a record-length 14-round schedule it meant more chances than ever before to show on and off-track abilities, and reduced restrictions meant time could also be spent with Williams when the schedule allowed.

“Throughout this year, obviously I’ve had a lot of races alongside F1, so a lot of the focus has been on F2 but in all the gaps we’ve been working extremely hard on the simulator as well as doing the best I could to get physically prepared for when a F1 test would come available,” Sargeant explained.

“To be honest, I entered the season with no expectations. It was simply to go in and do the job to the best of my ability and see where that put me at the end of the season. Obviously, when you start having extremely strong qualifyings and getting some race wins, the goal, the expectation shifts and now it’s set at a higher level. I think at that point it was full focus on trying to secure a seat for 2023.”

The switch of focus to F1 came just as Williams also made their decision that Sargeant was ready for the next step, and as his simulator time at Grove racked up. Sargeant was on the podium at Barcelona and in Baku, then at the British Grand Prix he won the F2 feature race from pole.

“I think from Silverstone onwards we said ‘okay, Logan is ready for F1’,” Capito revealed. He did not disclose whether the decision to part with Nicholas Latifi for 2023, which was announced last month, had already been made by that point.

“When we see that Logan is a race winner in F2, then it’s okay, he’s ready for next year,” Capito continued. “But it was still too far away [to sign him]. So we had to talk to other drivers as well and sort out the options. So that helped us also taking the final decision, and also cover the risk if Logan for whatever reason would not get the superlicence points.”

Despite a messy second half to his season, Sergeant is still third in the F2 standings and claimed another victory and pole after Silverstone. With one round to go, it is almost guaranteed he will finish the season in a position that would earn him enough points for a superlicence.

Before the F2 season concludes, Sargeant will follow up his Circuit of the Americas outing last weekend with two more F1 practice runs to prepare for 2023. It will also allow him to pick up more of those precious superlicence points – the shortage of which being what did for Herta’s chances.

Aside from Piastri, who he was narrowly beaten by in British F4 and FIA F3 but did convincingly beat in FR2.0, who else on the F1 grid has Sargeant raced against? Last year he went up against AlphaTauri-bound Nyck de Vries in the European Le Mans Series, where Sargeant gained useful experience of longer form racing than in junior series. He was also on the FIA F3 grid with Yuki Tsunoda in 2019.

But his upcoming F1 practice appearances will likely give the best indicator of how ready Sargeant is for F1. It says a lot about Williams’ confidence in him that Capito admitted they don’t have a back-up option lined up should their bid to bring the first American driver into F1 for eight years hit an unexpected snag.