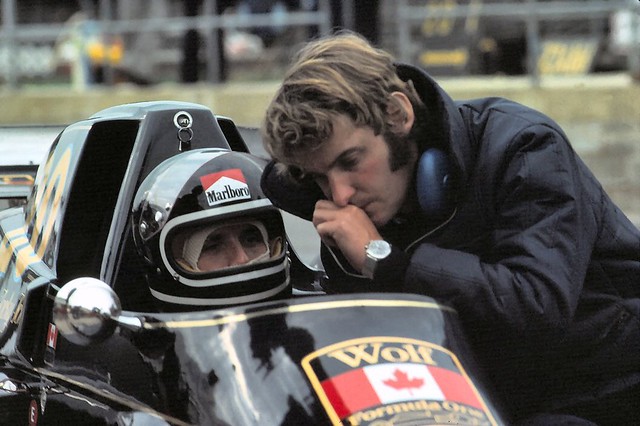 Having studied science at Birmingham University, Harvey Postlethwaite?óÔéĽÔäós ambitions of becoming a pilot were thwarted on account of him being colour blind.

A graduation job with ICI followed, alongside an amateur career indulging his other passion of motorsport, driving at club level. In 1970, he joined March, helping design their F2 and F3 cars, prior to being lured to the Hesketh F1 team in 1974.

To many, Hesketh was not a team to be taken seriously. They had a reputation for being run by a bunch of highly eccentric amateurs, including the likes of Bubbles Horsley and Lord Hesketh himself. Even Postelthwaite semi-jokingly explained away his move to the team being because “they got me drunk”.

And yet, inspired by the entertaining James Hunt, and thanks to the simple effectiveness of Postelthwaite?óÔéĽÔäós design, they made their way up the grid to become serious contenders. Sporting unusual but efficient rubber spring suspension, the 1975 308 even beat the might of Ferrari and Niki Lauda to victory at the Dutch Grand Prix, confirming Postlethwaite?óÔéĽÔäós status amongst the elite of the day.

A move to the Wolf team in 1977 saw his brand new WR01 secure victory first time out, and eventually allowed Jody Scheckter to finish as runner up in the Driver?óÔéĽÔäós Championship.

The result was no fluke. Postlethwaite was amongst the first to properly realise the potential of sliding skirts/ground effect with the 1978 Wolf. His next car, the WR7, featured a sleek monocoque construction that eliminated the weak joints of previous fabricated designs, which proved very timely, bringing him as it did to the attention of Ferrari.

Having finally recognised that aerodynamics could no longer be ignored, it was testament to the Ferrari’s faith in Postlethwaite, that he was chosen to lead a new approach to chassis design at the team.

Blending new carbon-fibre construction techniques successfully with the expertise of Mauro Forghieri and the power of the Ferrari’s turbo engine, his first car was the 126C2. It put Ferrari back on top, taking the constructors’ championship in 1982.

But the achievement was overshadowed by the death of Gilles Villeneuve and the horrible accident suffered by Didier Pironi.

Postlethwaite eventually joined Tyrrell. The latter stages of his career mirrored those of his earlier years, working with smaller teams on tight budgets, among them a brief period with Sauber, prior to returning to Tyrrell.

Many of Postlethwaite?óÔéĽÔäós design principles remain fundamental to modern F1 racing, from the pioneering high-nosed Tyrell 019 which recognised the importance of maximising airflow under the car, to the semi-automatic transmission and airbox used as a roll bar.

Some of his most creative developments came when budgets were at their tightest, including hydrolink hydraulic passive suspension, the pneumatic semi-automatic gearbox and the short-lived X-wings; all featured on Tyrrell cars in the 90s.