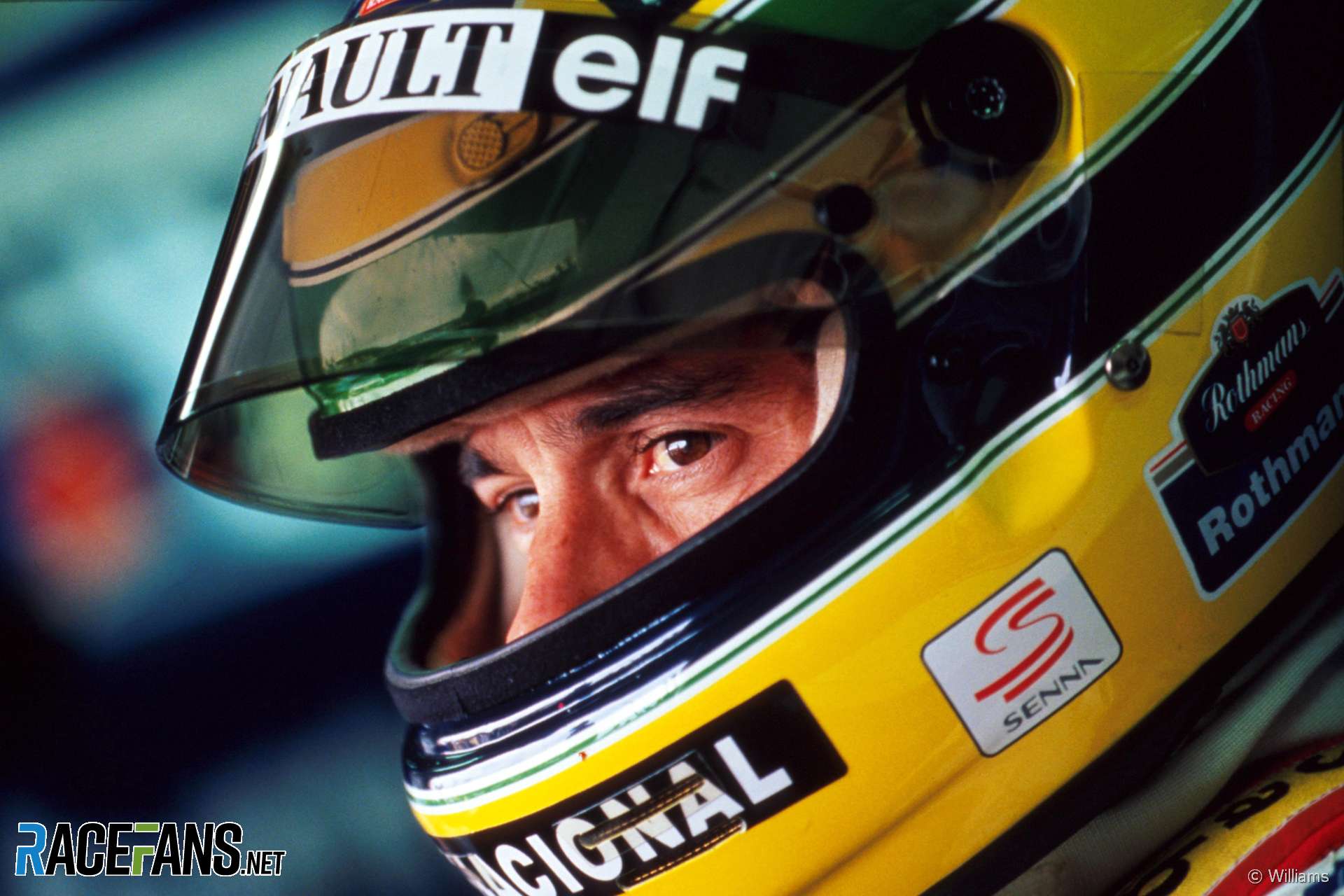 Ayrton Senna’s extraordinary feats at the wheel of a racing car yielded three world championship titles and 41 grand prix victories. He was probably the greatest exponent of the flat-out qualifying lap the sport has ever seen, taking 65 pole positions in 162 races.

These achievements alone ensured his name would be forever writ large in the history books long before the tragic circumstances of his death while leading the 1994 San Marino Grand Prix.

Senna first came to the attention of Formula One teams in 1983 as he was on his way to winning the British Formula Three championship. Williams were first to test the 23-year-old, and McLaren and Brabham also put him in their cars.

At the latter Nelson Piquet bristled at the prospect of being paired with another bright Brazilian talent and moved to block Senna’s arrival. Neither Williams nor McLaren were prepared to offer him a race seat for the coming season, so Senna secured a drive at the tiny Toleman outfit, who were entering their fourth season and were yet to finish a race higher than fourth place.

That changed soon after Senna’s arrival. In dreadful conditions at Monaco he guided his TG184 between the barriers on a near-flooded track whole seconds faster than the front runners. He was gaining on race leader – and future arch-rival – Alain Prost when the race was controversially red-flagged.

To that second place he added two more podium finishes before the end of the season. But he also incurred the wrath of Toleman boss Alex Hawkridge, who barred Senna from racing at Monza after his driver broke their contract to sign a deal with Lotus.

Again the results came quickly. Just two races into his Lotus career Senna became a race winner. Again he prevailed in dire conditions, this time at Estoril in Portugal, finishing a minute clear of his rivals. Seven pole positions that year underlined his status as the sport’s foremost qualifier.

But on race days the reliability of the Lotus and the fuel consumption of its Renault engine was often found wanting. Nonetheless he led the 1986 championship in its early stages and remained in the hunt until late in the year.

Lotus pulled out all the stops to keep him in the team for 1987, securing a supply of Honda’s class-leading engines and signing a lucrative new sponsorship deal with RHR tobacco. They also acceded to Senna’s urging that they race their new active suspension car. Over the bumps and twists of Monaco and Detroit he won as he pleased, but the power it sapped from the Honda engine left the Lotus out-gunned on power tracks like Silverstone, where he was lapped.

Long before the season was over, McLaren made their move to capture both Senna and Honda’s engines. Allied to Prost, now a two-times world champion, and a formidable design team headed by Gordon Murray and Steve Nichols, the team were almost unstoppable.

The 1988 world championship was a mesmerising contest between Senna and Prost. Rarely troubled by their rivals, the pair claimed 15 wins out of 16.

Senna’s season got off to a disappointing start at home in Brazil, where he was disqualified on a technicality. And although he won second time out at Imola, he threw his car into the barriers at Monaco while leading.

But he had laid down a marker in qualifying for F1’s most prestigious race, shocking Prost with a lap time 1.4 seconds than his team mate could manage. They finished one-two in the next four races, the order swapping each time, but from the British Grand Prix Senna seized the initiative.

At Silverstone, in wretched conditions, Senna’s wet weather verve saw him win again. But Prost withdrew, saying the conditions were too dangerous. This Senna win was the first of four in a row.

Prost fought back, winning in Portugal despite Senna squeezing him to the pit wall while the pair were contesting the lead. It was the first visible sign of the coming breakdown in relations between the pair.

The title seemed to be slipping from Senna’s grasp when he stalled on the grid at Suzuka and he was engulfed by the field. But the MP4-4 made light work of the traffic and as rain began to fall he caught Prost and passed him to win the race and with it the world championship.

Senna’s 1989 title defence began well – he won three races in a row early in the season. But the animus between him and Prost deepened at Imola, where his team mate accused Senna of reneging on a pre-race agreement. The MP4-5 was not as bulletproof as its predecessor, and technical problems halted Senna in the next four races, three of which he had been leading.

It happened again at Monza, handing a vital win to Prost, who had already announced an imminent move to Ferrari. They arrived at Suzuka with Senna needing to win, and when he moved to pass Prost at the chicane the two McLarens collided.

Prost had undoubtedly made the calculation that both cars failing to finish the race would make him world champion. But Senna was more incensed that, having disentangled his car from Prost’s rejoined the track, replaced his front wing and won the race, he was excluded. He believed FIA president Jean-Marie Balestre had played a role in securing Prost’s title.

The 1990 world championship was an action replay but this time Prost was in a Ferrari and Senna arrived at Suzuka leading the points standings. Senna’s ire was tweaked once again when, as pole sitter, he was refused to be allowed to start from the cleaner left-hand side of the track. As the race began Prost took the lead and Senna wasted no time in smashing the Ferrari out of the race at 160mph.

Senna was pilloried for his tactics but the governing body was powerless to take action – even when, 12 months later at the same circuit, he admitted his actions had been deliberate, and laid blame for what had transpired at the feet of Balestre, who had since lost the FIA presidency to Max Mosley.

By then Senna had wrapped up a third world championship, seeing off a mid-season surge from Nigel Mansell in the Williams FW14. But Williams were in the ascendancy, and Senna soon found himself outpaced on the track and outmanoeuvred off it.

Mansell enjoyed the kind of performance advantage in 1992 that Senna had four years earlier and won the title at a canter. Senna picked up a handful of wins, including a fifth consecutive Monaco Grand Prix victory thanks to a late drama for his rival. But the season ended in acrimony when Senna ran into the back of his rival at Adelaide.

At the time it was unclear whether Senna would return to drive in 1993. McLaren had lost its Honda engine deal and Prost’s arrival at Williams meant the door was closed for him to join the team which had by far the quickest cars.

He eventually agreed on a race-by-race deal to drive McLaren’s Cosworth-powered cars. Against all expectations Senna matched Prost win-for-win over the first six races and led the drivers’ standings. Among his victories was one of his sweetest triumphs, a dazzling performance in slippery conditions at Donington Park where he all-but lapped the field.

But the class of the Williams cars told over the season. After Prost won his fourth world title and headed for retirement, Senna lost no time in finally rejoining the team which had given him his first taste of Formula One machinery.

As the season began Senna’s initial struggles with the FW16 seemed like a temporary setback. Williams were surely too strong and Senna too quick to be upstaged by Michael Schumacher’s Benetton all season long.

Then the unthinkable happened. On the sixth lap of the third race of the season at Imola, Senna’s Williams speared off the track at Tamburello and gouged the concrete retaining wall. A suspension fragment pierced his helmet, inflicting fatal injuries.

The sport went into shock following the loss of one of its greatest drivers. Senna’s death came just 24 hours after another driver, Roland Ratzenberger, died at the same track – the first fatalities at an F1 race weekend in 12 years.

Brazil came to a standstill when his body was returned to the country and buried at the Morumbi cemetery in Sao Paulo, a short distance from Senna’s neighbourhood and the Interlagos track where his victories brought joy to a nation.